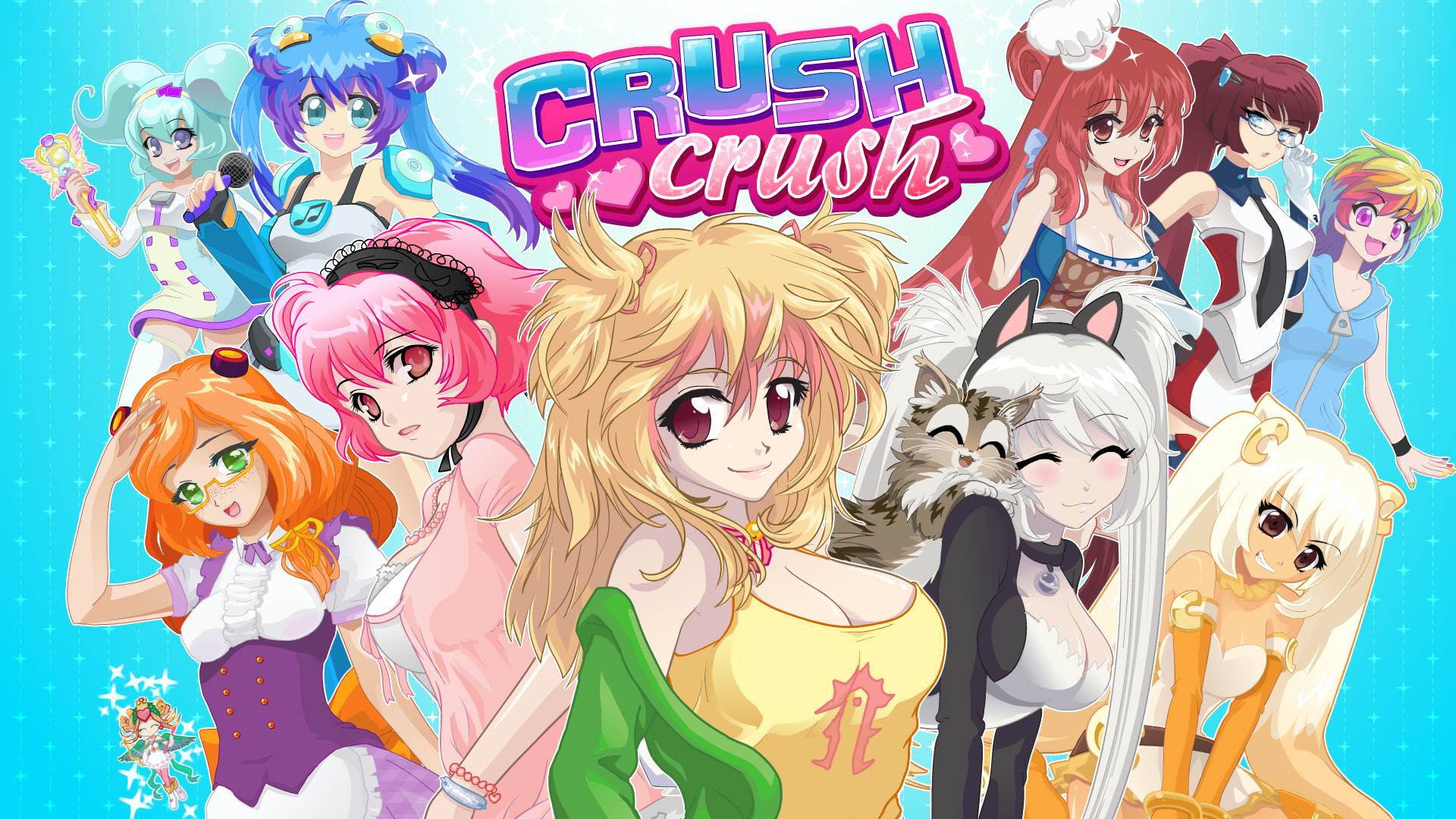 Crush Crush is a strange game. There is essentially no content. Like, there’s no story, no winning condition, the visual assets and sound effects are mediocre drivel. There is only one music track. Playing this supposed dating simulation game, you barely feel like you’re engaging interactive media. And yet, I hear from my sources at Nutaku, it prints money like the Federal Reserve Fund. If you love watching your monthly Windows Operating System updates, you will love Crush Crush.

I dunno if it comes off of me, but I have been working for years to overcome my chronic social anxiety. For the past year, I’ve been hunting for dates via several recommended dating websites. But because my male privilege stands unchecked, I am spending my days playing retarded dating sims on minimum wage, rather than pounding local pussy I can’t afford. Mildly speaking, I am sexually frustrated to the point, where I am mentally preparing to become a serial rapist – it is only thanks to games like Crush Crush Moist and Uncensored, that local pussy stays safe from my white dong. I am resolved, by writing the biggest, baddest, most luxurious hentai reviews, to rake in the money to sexually engage the cunt of a fine-ass female escort this weekend. I found out last week that paid pussy is legal in my country.

Let’s talk about Crush Crush Moist and Uncensored, so I can get laid to Sassy Suckcock on Sunday.

In this game, you date several hollow archetypes, each for the promise of two CGs worth of anime tiddies. It is the least rewarding sexual experience of my life. You click the girls, or press the “flirt”-button, to increase your affection level. That’s the extents of how close you will get to fucking in this game. If you are looking for entertainment that 1) requires minimum engagement, 2) flatlines your brain waves, 3) is so safe and pandering that you barely experience emotions, 4) is like watching grass grow, then Crush Crush: Moist and Uncensored is your game.

For reference, in dating games, you are supposed to have a map, with clickable nodes dotting it. These nodes are usually a school, a gym, some shops, a bar to pick up girls, various jobs, etc. In Crush Crush, there is no map, only a town full of progression bars. You build up stats and grind money, to fill the prerequisites the girls set for you. Some girls like buff guys, so you gotta buff up to get that pussy moist. Some girls like smart guys, so you gotta pimp your brain to get those panties down. You can’t just be the average joe with higher than average skills in emotional manipulation. In hentai dating simulation games, you gotta be the fucking man.

There is no male privilege in Crush Crush; you have to become THE alpha male. To get your dick wet, you gotta git gud and be the biggest, buffest, ultra high-educated know-it-all genius, work ten jobs, a dozen hobbies, and own a bank account bursting with billions. You can’t just bribe your way into bed; you gotta invest in the pussy. The girls won’t have you, lest you buy them diamond necklaces, luxury cars, countless thousands of red roses, and that’s just to woo the girls next door. The further you get in this game, the harder you gotta hustle to keep up with the impossible demands of these modern day princesses.

This game has a gay version! Read our review of Blush Blush.

Behold, beta boy. These are all my hobbies, I am everywhere, on every timeline, I am Doctor Manhattan. Not a single hour of my day is wasted on unproductive activities. My available hours per day are marked by “time blocks”. Each hobby takes 3 time blocks, and jobs can require 1-20+ time blocks. More time blocks are unlocked by getting relationship levels, job promotions, and dicking around.

The object of the game is to become Friedrich Nietzsche’s uberman, and unite the Eurasian continent. Imagine Flash and Clark Kent had sex and birthed a son that looked like a white male blob. As you grow, you get faster, stronger, and soon you can date 10 girls at once, do 20 jobs and 12 hobbies at the same time. You are unstoppable, the Literal God among men.

The game saves your progress automatically when you close your browser, and continues playing while you are away. You can store up to one week’s worth of progress, before you gotta log in to reap the rewards. This is a core part of the ruthless design of Crush Crush, that will hook you in, like being in debt.

In this game, you do literally nothing aside from hopping between interfaces, choosing which jobs and hobbies you want to skill up. Hobbies unlock new jobs, and some girls require that you’re skilled in a particular hobby. Hobbies also boost how much begging (correction: flirting) you gotta do, before she puts out. Oh, and small tip: try to unlock the casino job soon as possible. Casino requires 26 points in luck, and 26 points in mysterious. This profession is the godmode money-making job, requires only 2 time blocks, and on max level, stacks the maddest bricks in the hood; 1.935 million each ding. Yes, jobs earn you money (what a twist!), and every time you make money, you get closer to a promotion. Some girls necessitate that you are on a particular level in a certain job. Each promotion nets you an achievement, and increases the revenue from the job in question. Other effects of promotions include a decrease to their time block requirement.

Like all modern cancerous free to play games, Crush Crush Moist and Uncensored has pandering achievements. Unlocking relationship levels, job promotions, and dicking around doing this and that stupid shit, nets you achievements. Every fourth achievement, you gain a time block. Because your faggot face probably skipped the paragraph that explained it, here it is again; hours per day are marked by “time blocks”, each hobby takes 3 time blocks, while jobs can take 1-20+ time blocks. Time blocks limit how many jobs and hobbies you can have at the same time. Achievements also contribute to your prestige bonus. What is prestige, you ask? Prestige is the core addiction-inducing mechanic of the game; your prestige bonus increases the more shit you’ve done in your playthrough, and you activate your Prestige by resetting your game in the light blue stats screen. It’s like a cheat code you enter again, and again, to boost your progression bars.

The bottom line is, and this is a good lesson for you young ones: your brain is fucking retarded. The wiring in your brain, despite millions of years of evolution, is a glitchy mass of diarrhea, that fucks you over constantly. Because the primal parts of your biological computer react to certain stimulus in predictable ways, certain types of games will make you enjoy them, despite their actual quality. The truth is, your brain has difficulty telling apart addiction from happiness. Addiction is induced on you, by pulling on the right cerebral wires; Crush Crush pulls every stop to get you hooked, and you will enjoy it immensely, for hours on end, despite the total absolute hollowness of its content. Even if the game is a blatant skinner box, you will enjoy it.

This game is not broccoli juice, it does not hike up your energy levels, reduce your cancer mortality rate, or lube up the synapses in your brain. No, Crush Crush Moist and Uncensored is fucking cancer, it’s the gaming equivalent of Coca-Cola. This game will kill your time while teaching you no worthwhile skills, nor does it provide you an experience worthy of remembrance. The biggest fault the game has, is how it’s streamlined to the extreme, that while it plays smooth as fuck, you lose the immersion. You do not feel like you are wooing females in a gamey world, no, you feel like you’re alone playing a dating sim on your internet browser, watching numbers grow every passing second of your mortal life.

Crush Crush Moist and Uncensored has, unsurprisingly, its entire business model built around humanity’s collective impatience. Save from the outfits you can force the girls to dress in at the cost of 10 gems, every item available in the store, is just a boost. When the entire game experience is about the joy of anticipation, there’s literally no reason to buy anything from the store. Yet, I have been told that thousands and thousands of people do. Depressing.

You can buy various boosts in the in-game store. You can skip ahead entire weeks, rake in promotions, money, achievements, et cetera that you would normally earn by playing the alotted time. Everything costs diamonds, which you buy with Nutaku gold, which you buy with real money, which you earn by sucking cocks in the downtown gloryhole. Hustle or choke on dick, motherfucker.

Crush Crush has a severe lack of content, unless watching progression bars qualifies as fun. But that’s also the thing; it feels like fun just watching numbers grow. But what you feel or like doesn’t change the fact that there’s no story, no proper characterization, no voice acting, there’s just nothing that would give this game lasting appeal. You gorge on it like candy, you enjoy the taste while it lasts, and switch to something else.