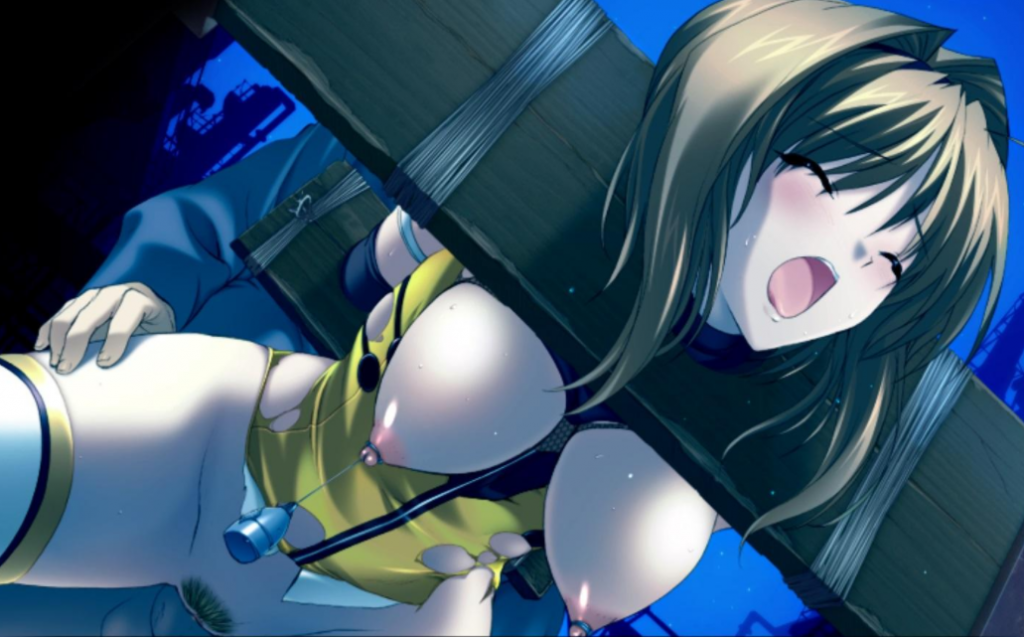 “Beat Blades Haruka” offers an immense amount of sex scenes and fetishes to explore. Sex is integral to the story, and the gameplay.

Eroge fans have been waiting for this game to be released in English, uncensored, for decades. Thanks to the dutiful efforts of MangaGamer, Alice Soft has officially released their first title “Beat Blades Haruka” overseas.

Alice Soft is, beyond the shadow of a doubt, one of the most enduring eroge makers out there. Ever since the dual release of Rance and Intruder in 1989, the company has shown almost no signs of slowing down, steadily releasing a new game every year. Combining elements of RPGs, dungeon crawlers, raising simulators, strategy and adventure games, Alice Soft has dipped their toes into many things. Thanks to their constant efforts to innovate, the company has successfully redefined what eroge can be in this day and age.

To those unfamiliar with the Japanese concept of sentai shows, think of it like Power Rangers with the cheesiness left intact. Only the huge robot fights are replaced with unapologetic sexual acts. Overarching the silliness of a superhero show is the story of a group of female ninjas. They come from the Crescent Moon Clan. They are combating the evil Noroi faction, that’s hellbent on ruling the world. The female members of the Crescent Moon Ninja Clan are able to power-up their physical abilities and ninja arts through “Dragon Synergy”. When the male leader of the clan fucks the female shinobi, the girls gain “sex power”.

The somewhat lengthy prologue does a good job of setting up the upcoming conflict between the two groups: it’s dramatic, and action-packed, a great introduction to the hopelessly perverted protagonist Takamaru Ikusabe, and the supporting characters. From there, the plot takes a step back in favor of the gameplay, and bombards you with as many sex scenes as possible. While I personally don’t feel this is detrimental to the overall story the game is trying to tell, longer anecdotal sections would have made character development much better.

You learn things about the characters, such as their likes, dislikes, and motivations from brief, bite-sized visual novel segments that can be triggered randomly. As in-game days pass, or you enter certain character routes under specific conditions, these events trigger. Even though “Beat Blades Haruka” is a visual novel, it’s a very gameplay-driven title.

After Takamaru and his companions are introduced to the demonic Noroi faction, the game truly begins. The majority of the Noroi forces are sealed behind a techno-magical seal. They will be fully released upon the world in 99 in-game days. It’s up to the player to defeat minions emerging as a result of seal getting weaker. Takamaru has just received a crash course in reality, his life as a high school student has been turned upside down. He slowly but surely learns the ropes of sex. Starting off with the mild-mannered, gentle Haruka, Takamaru works his way up to lay the sweet pink-haired tsundere Narika, and finally gets it on with the sexually experienced Subaru.

Beat Blades Haruka is also a raising simulator. Takamaru’s day, considered one in-game turn, is divided into three phases: morning, afternoon and night. The first two phases are reserved for building up the stats of Takamaru, and the ninjas. Nights are reserved for combat operations, like slaying Noroi ninja grunts and Kainin (special officer-like enemies). You also fight invading Tetra Sealer castles, that start appearing as you progress. The success of training your ninja is dependent on six-sided die rolls. You have a limited number of die rolls per turn. While the stats affecting your female companions are standard RPG fare, Takamaru’s Libido and Brutality stats are a whole different story. Libido directly affects the dice recovery numbers of each new day, while Brutality indicates how badly Takamaru’s mind is affected by all the violence, and the depraved sex he gets.

Haruka, Narika, and Subaru, become more powerful by performing varied sexual acts. For each action taken, you are rewarded with sex scenes, an appropriate increase in stat points, and sex power.

If you start losing fights, letting increasing numbers of Noroi minions roam around town, you will lose “Peace points”. Lose all the points, you lose the game. You have to make smart choices with how you manage your resources, like how you allocate your skill points.

Actual combat is handled in a simplistic fashion. You face the bad guys in turn-based RPG combat. Each turn you choose what to use from a list of skills. When you, or the opponent’s life points drop to zero, the battle is done. Your three ninja girls have pretty much the same skills. Only their most SP-expensive skills are unique in how they work. Despite how elementary the combat is, I still had fun with it. Characters emote their moves like their lives depended on it. Even with minimal animation, attacks feel like they pack a punch.

Replayability is something the game has in spades. Getting through any of the game’s many routes requires management of your Peace Points and Brutality Points, but also Love Points. Love points are acquired by making specific choices during random in-game events. Routes require a specific minimum number of stats. If you want more than one ending in a playthrough, save your game frequently before route-defining points, or before your Peace Points, and Brutality points drop too low. There is no way to get all the endings, all the route-specific sex scenes, or even meet all the Kainins, on your first playthrough.

This title was released in Japan in 2008. You would expect a wide-screen HD game, but nope. The whole game is in a 4:3 letterbox. It makes Beat Blades Haruka look much older than it should. The game looks downright antiquated, due to this one flaw. But, the CG art deserves praise for the level of detail, and the shadows especially. Some uncensored parts with genitals look out of proportion. Female Blades are trained to use their bodies for challenging sexual acts, so “wear and tear” in their vaginas is to be expected. But Haruka, despite no prior experience before Takamaru popped her ninja cherry, is sometimes drawn with a vagina as wide as the Channel Tunnel connecting France and the United Kingdom. Luckily, apart from the incredibly pointy chins the characters sport, this is my only complaint about the game’s art direction.

The game has a very cool rock opening song with great instrumental rendition, but beyond that, the game’s soundtrack is kind of uninspired. The very few tracks the game contains sound like the most generic music you’d hear in any cheap run-of-the-mill visual novel. As BBH is a very long game, being forced to listen to the same groaning, and goofy soundtrack will eventually grate at your nerves. You’ll want to replace it with anything else, even nightcore remixes of anime openings. Fortunately, none of these issues were able to significantly spoil my enjoyment of the game. It’s a testament to the game’s quality.

The sound effects aren’t the biggest draw of this particular game. There’s the usual sword clanks, and swings for battles. But sounds like a wet pussy getting pounded, are missing. The effects are on-point, but don’t really stand out. Even when used sparingly, the effects complement the action on screen, and provide a good sense of continuity. What does stand out, are the awesome and professionally performed vocals. Talented voice actors and actresses voiced almost every line in the game. The female performances during sex scenes are notable. The loving, romantic scenes have performances as beautiful and nuanced as the brutal rape scenes. The seiyuus put their all into making you experience their despair, and their pleasure, with bloodcurdling screams, grunts, and sensual moans.

The pornographic material in the game can be divided into two distinguishable categories: The positive, bubbly romantic content, and the brutal, manipulative content. Playing through the game normally, you’ll read through a story about love, deepening friendship, the gradual exploration of one’s sexuality. These routes are prevalent with vanilla sex, with a few softcore fetishes explored. Takamaru is a hopeless pervert long before he starts unlocking the hidden powers of the girls, with the magic of his penis. His gentle, considerate side comes through best when he’s realizing his wildest dreams, always caring about his partner feeling good. If you’re into heartwarming lovemaking, with consent oozing out of every pore, play the love routes.

You only get glimpses of the dark side of BBH’s adult material in the fluffy love routes. Going the complete opposite path, changes the experience entirely. If you let your ninjas lose battles against the Noroi, intentionally or because you suck, they get raped. If your ninja loses to a generic-type enemy, they’ll be raped off-screen, no visuals. But losing to Kainin, you unlock an original, full-length sex scene. The rape scenes are graphic, described, and voiced in gruesome detail. You can actually feel the women’s despair, as their bodies are ravaged.

Getting enough Brutality Points is an easy gateway to even more depraved content. If your ninjas lose enough times, they gradually turn into mind-broken sluts, craving orifice penetration 24/7. There are even endings where these prim, and proper maidens become cum toilets for men with less than acceptable hygiene. The more you play like this, the more Brutal Routes you open, which unlock even more warped sexual encounters. The grim Brutal Routes also culminate in some grim endings. Despite how tragic they were, I confess, they made me smile from ear to ear. Yeah, the game actively corrupted, just as it corrupted its own fictional characters.

A good eroge gets you interested in content you didn’t buy the game for. I’ve explored lots of different material focused on forceful sex, and I never really enjoyed what I saw. “Beat Blades Haruka”, however, did something to me, from which there is probably no going back. It made me enjoy fictional rape, and actually feel turned on every time I punished my underlings using Takamaru as my proxy. I acquired a rape fetish, I have “Beat Blades Haruka” to thank for it.

“Beat Blades Haruka” is definitely worth its asking price of $34.95. There is an immense amount of visually appealing, audibly diverse sexual content. Even though the gameplay portions are nothing unique on their own, the addition of simple, distinct mechanics from other game genres, make the package incredibly enjoyable. Download Beat Blades Haruka.