Welcome to the world of Cunt Wars, where epic heroes and mythological monster girls wage eternal war for top spots in online leaderboards. You play as Adam White, a redpilled white male on a crusade for pussy and power.

If you need gaming tips on this game, read How To Advance in Leagues in Cunt Wars. 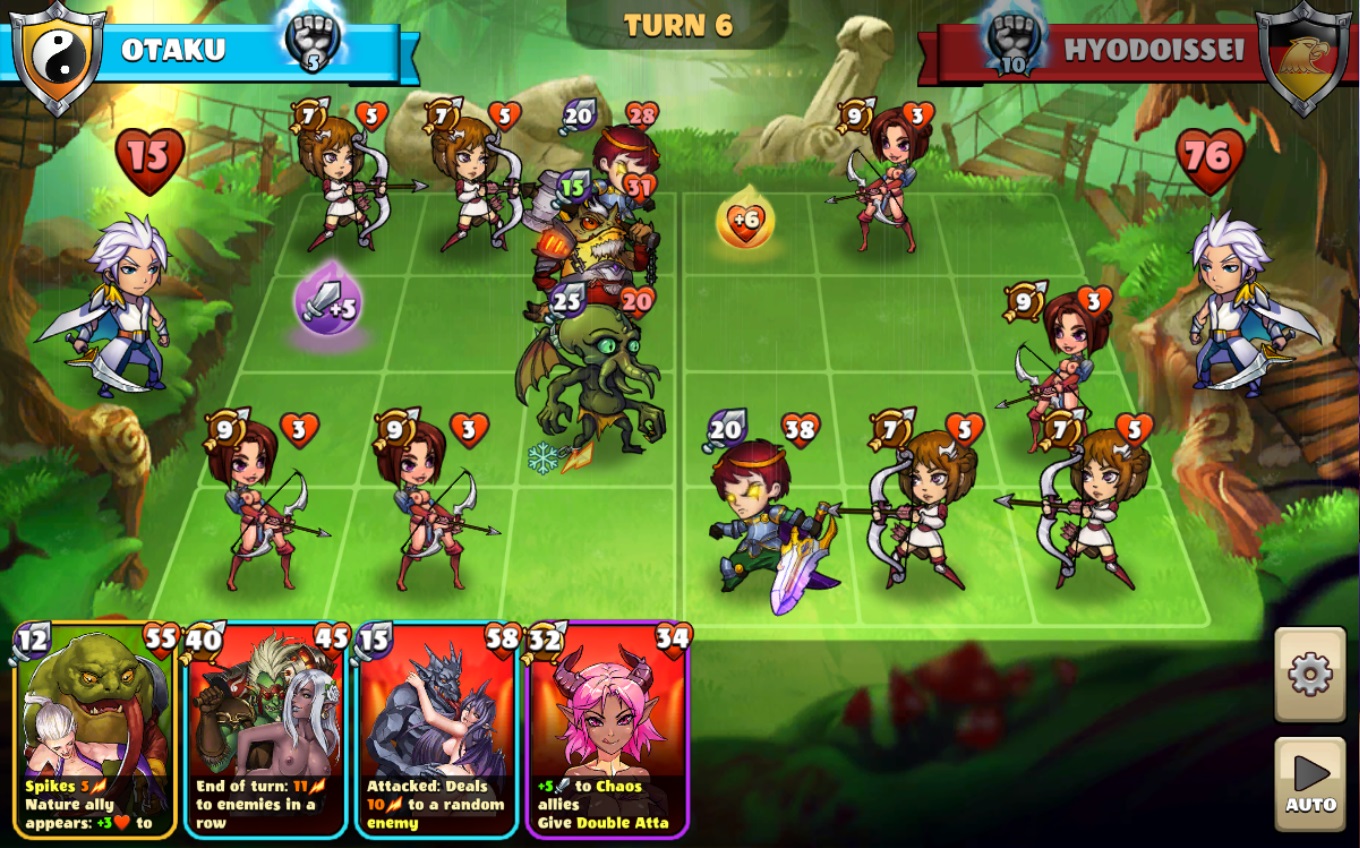 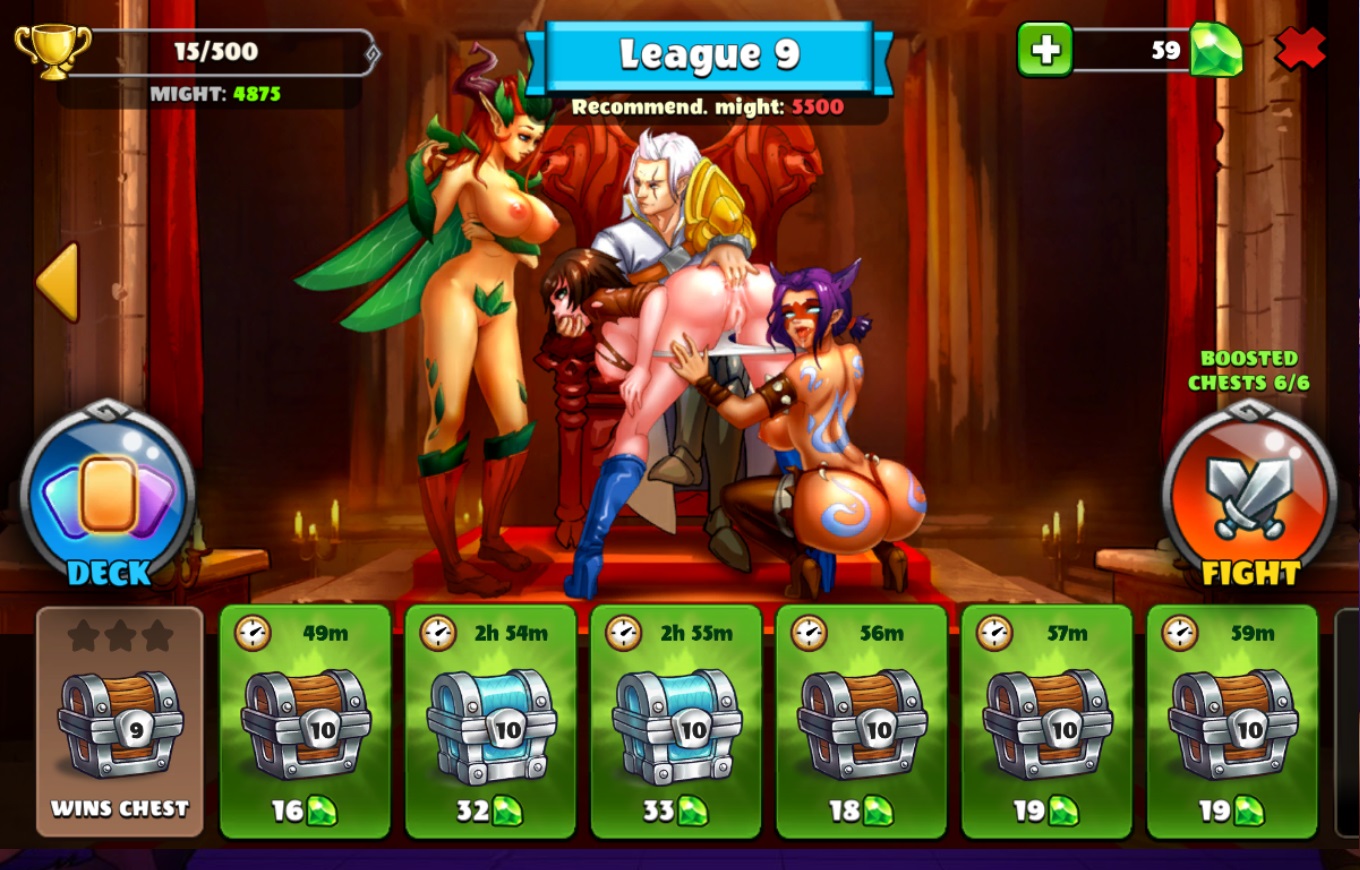 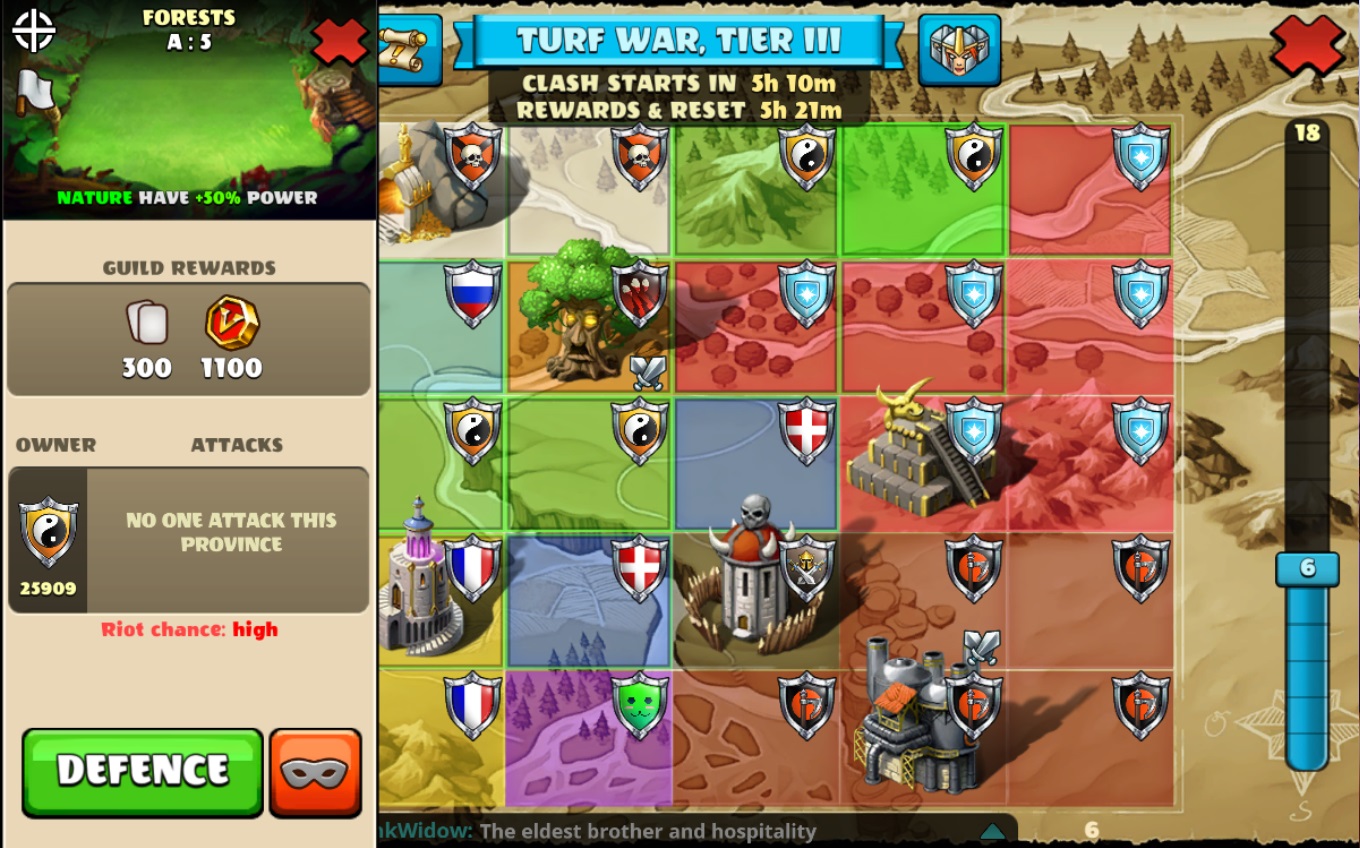 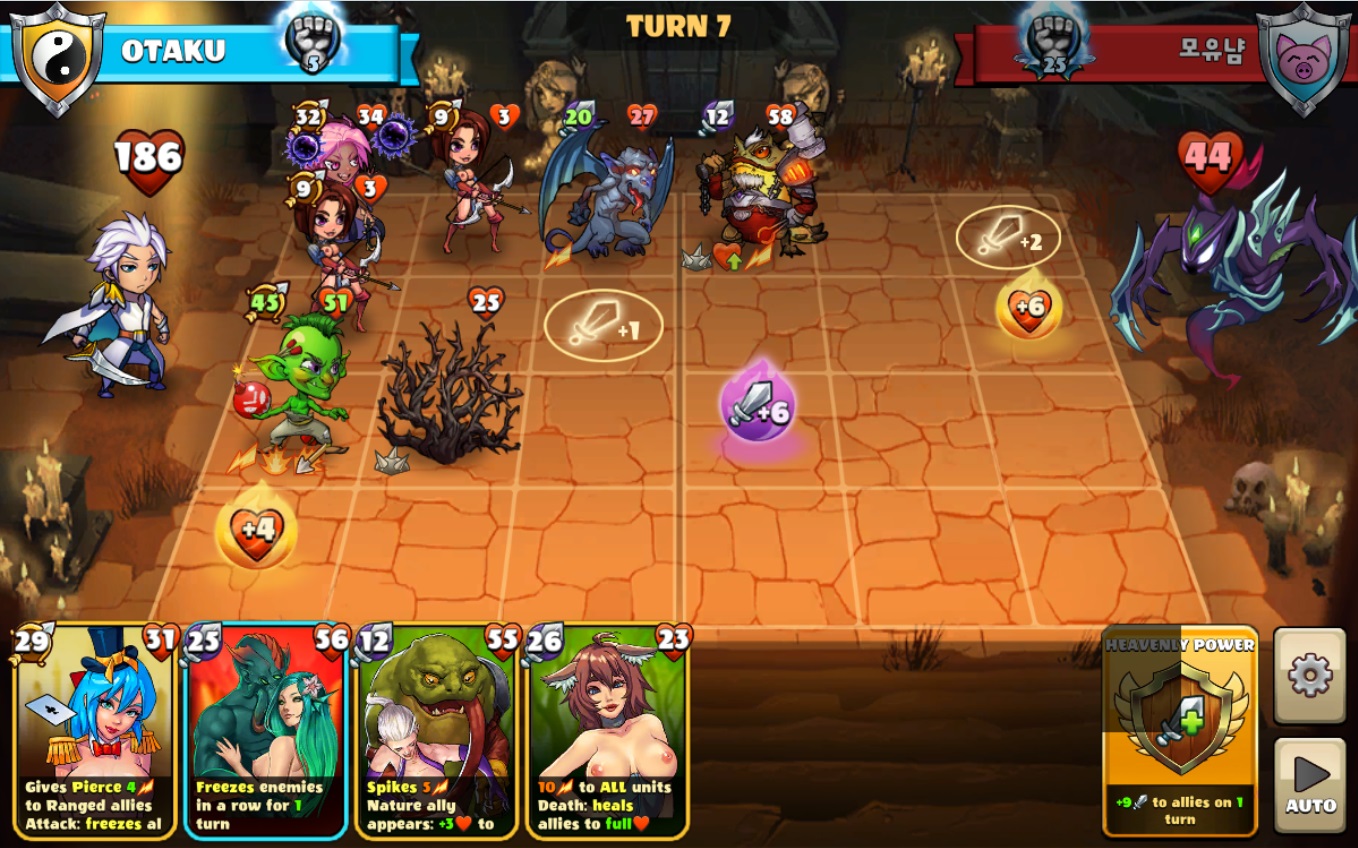 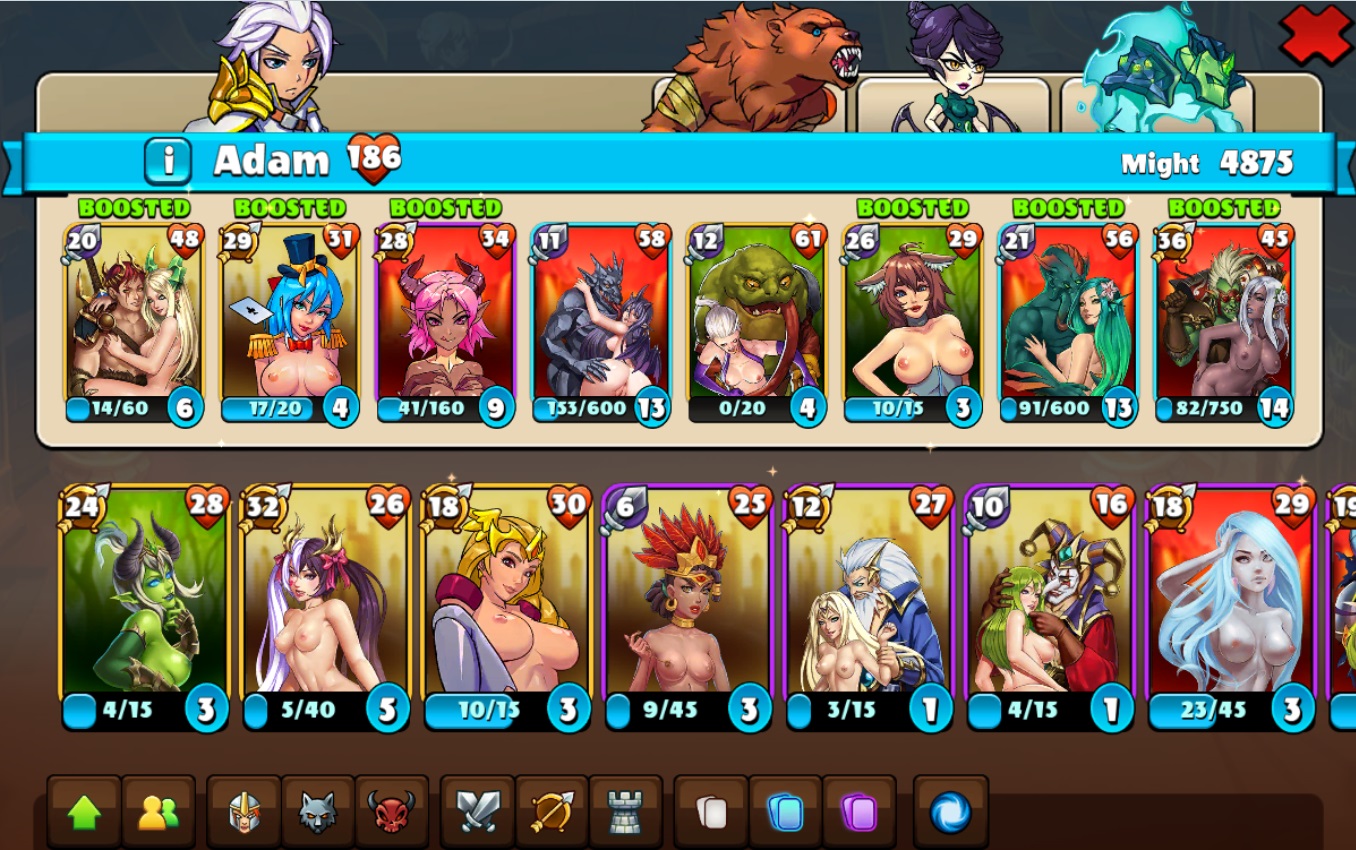 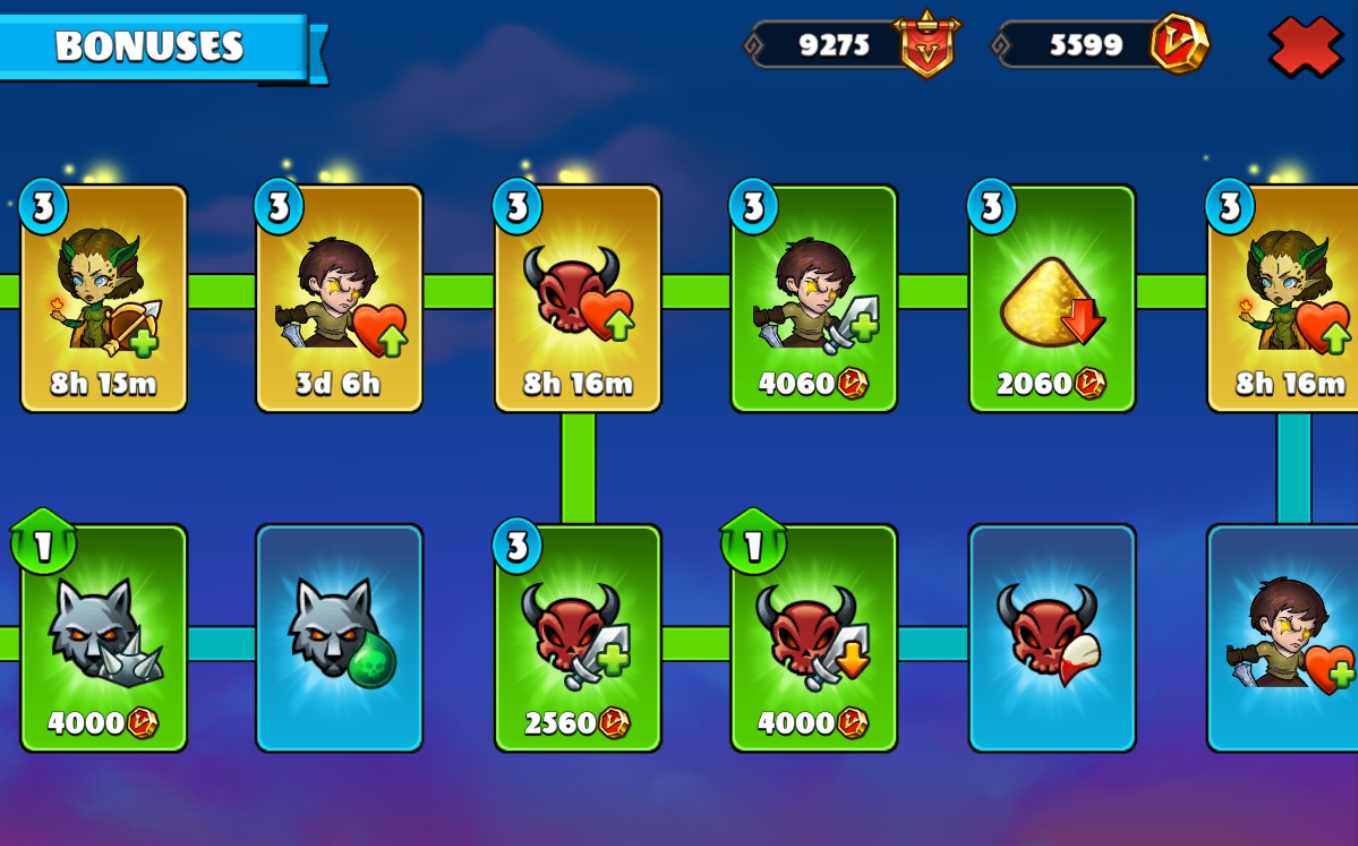 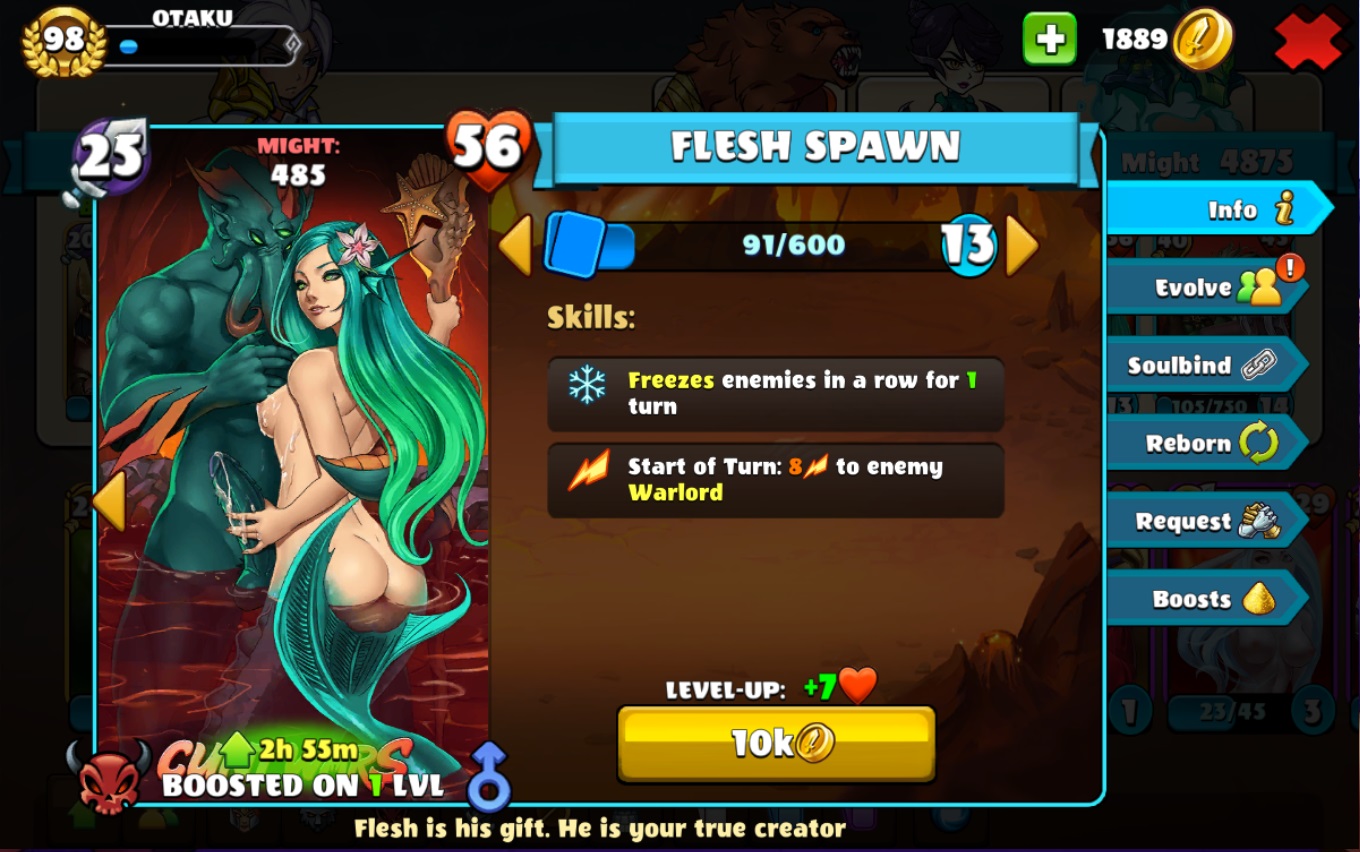 Each turn, you summon one unit. You choose minions to summon from four random cards in your deck. After playing a card, you draw a new one. Similar to Magic the Gathering, your units attack the enemy summoner, unless there are monsters blocking their attack path. Every unit from one side attacks before you pass the turn. The summoner whose face gets smashed to zero health points first, loses.

The game board has random objects that help you gain an advantage. There’s rocks that block damage, totems that buff units. There’s squares that buff damage and health of units that stand on them. There’s all kinds of power-ups. Some of the most “imbalanced” objects are the simple rocks. If the player who gets the first turn tucks a high health ranged unit behind a rock, you need some major luck to win.

I accessed PVP league rank 20 in two days, which pit me against players with 20%+ more health than my guy. I’ve been grinding this rank ever since, up and down, managing to win about 1/3 games with good play and lucking out on the board. It really stirs your competitive spirit to get your ass handed to you, to then power up your minions, and smash through the previously inaccessible ranks.

Many matches are decided by baiting out the enemy’s cooldowns. If you’re the first to blow your summoner’s “STORM”, which deals four damage to all enemy units, you’re probably gonna lose, because the second spell is “Summon Two Archers”. The first cooldown counters the second, so the player who blows his load first, will be eating arrows the rest of the game. But, the game has so much randomness, the tide can turn anytime. 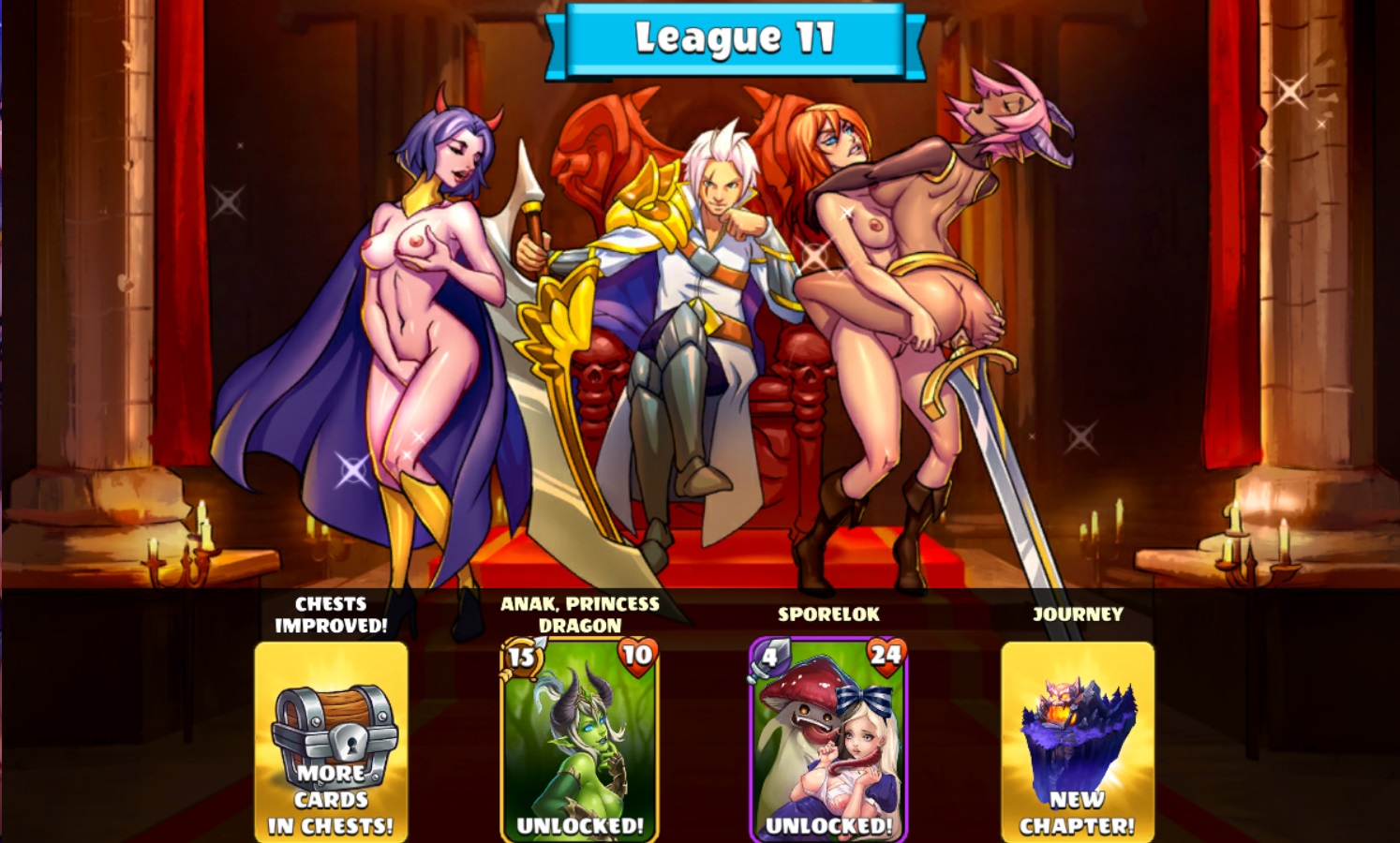 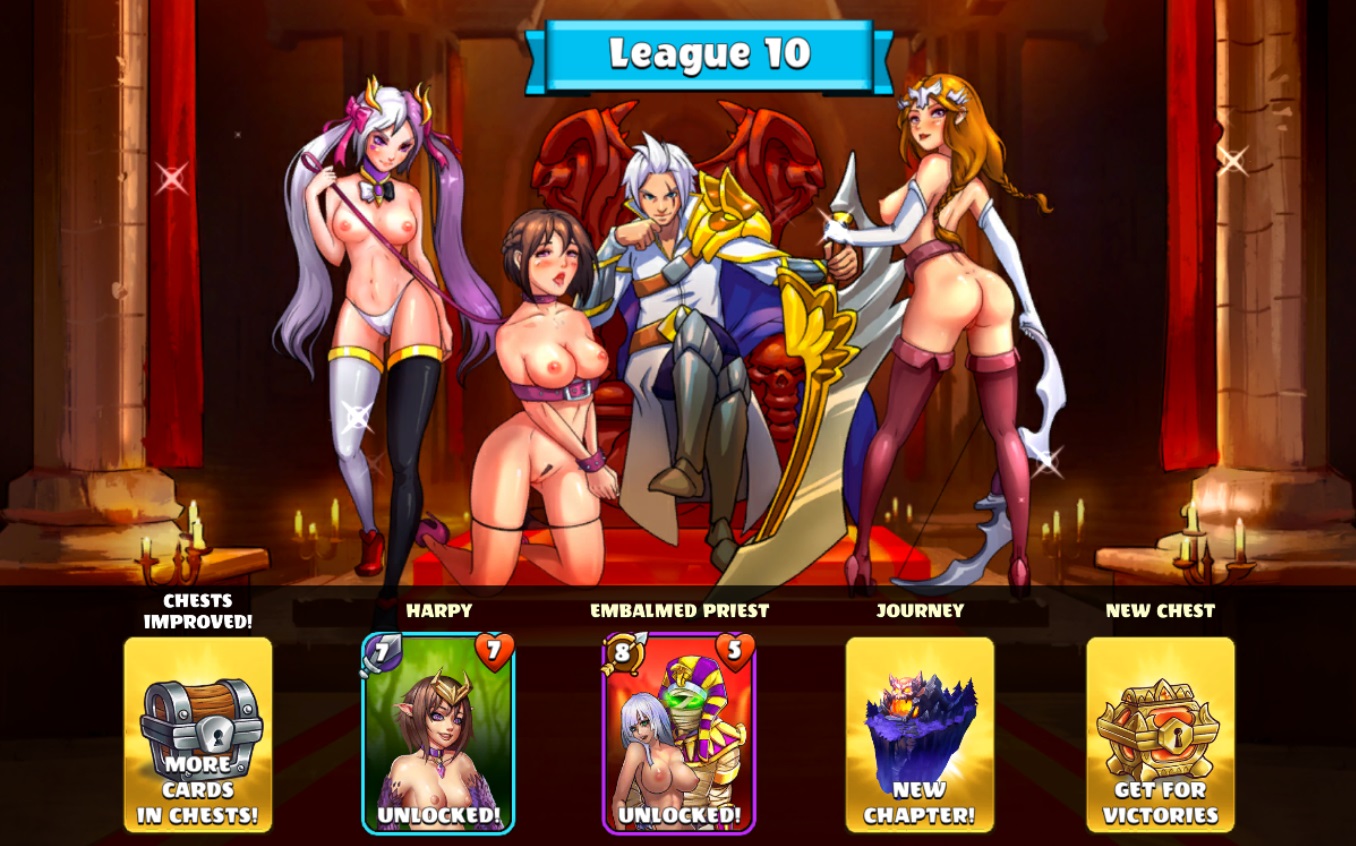 After two months and $200 later, I accessed league rank 11. Compared with Magic the Gathering, that was cheap. After another few months of practice and grinding for gold and cards, I reached league 9.

Winning battles grants you loot chests full of cards, gold, and other goodies. The chests respawn every few hours. When you gain duplicate cards, you can spend in-game gold to upgrade a minion’s stats. The higher levels of power require increasing numbers of duplicate cards. Yes, the game expects you to be so addicted at that point, that you’ll happily spend real-world currencies to shorten the grind to cross the next threshold of power.

Cunt Wars is somewhat pay-to-win. However, it’s so much fun, you don’t mind losing a few games while grinding out the humble beginnings. And, the daily deals offer such crazy value, you won’t mind throwing a fiver to snatch a 90% discounted booster pack and 20K gold.

Many cards and strategies are valid, thanks to the game throwing random in-game events that buff cards.

When a card type is buffed, suddenly you’ll see some of your minions with twice the health, or damage. Other players receive the same bonuses, which mixes up the metagame. You can also use gold dust gained from adventures to temporarily buff individual cards. 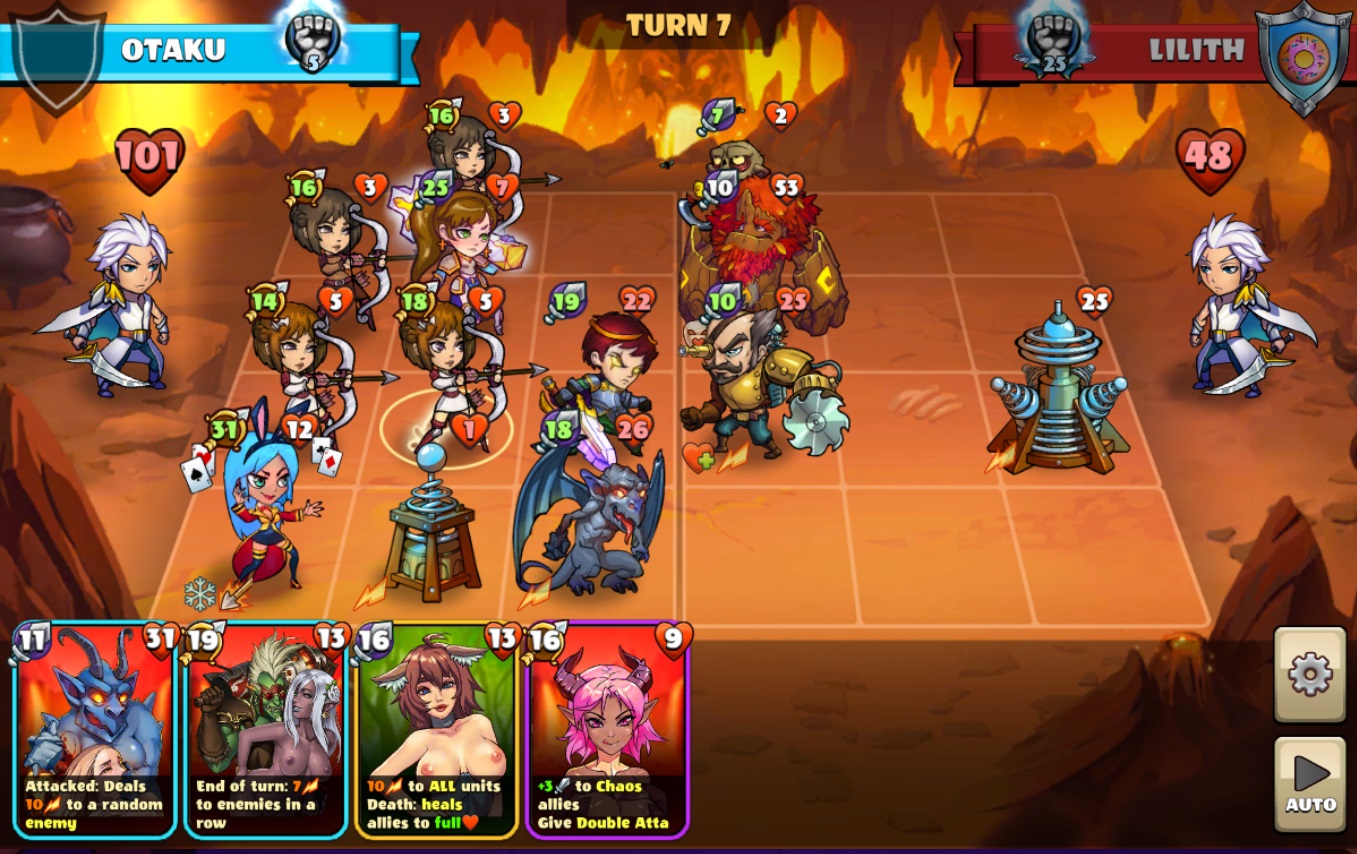 The game boards look gorgeous, and they have plenty of variety. I’ve seen everything from pyramid halls to grim swamps, and icy lands. The variety of visuals keeps the experience engaging.

Cunt Wars is free to play. You can buy things in the in-game store with the green-colored gems. Items you can buy include instant resets to the cooldowns of the loot chests. You can buy gold dust, that boosts the powers of singular units. You gain gems at a slow, steady pace from normal play, which slowly conditions you to getting used to the premium features. Living without premium will be oh, so painful after you experienced the love.

The Cunt Wars original soundtrack rocks several tracks and jingles, that spice up the experience. I found myself enjoying all the songs. They’ve very fantastical, with a different, refreshing vibe to each of them. Just for battles, there are multiple fluent tracks to enjoy. The menu music is more medieval in style, but still modern.

The game has partial voice-acting. The male main character has a couple voiced emotes, while the minions will giggle, roar, and generally make noise. The voices are as cartoony as the character art, meshing perfectly with the cheerful aesthetic. The acting and sound quality are fine.

I guess 200 dollers to you is not a lot but i think to the rest of the world to actually become relevant in the game , that sounds like a crap load of money. They game so called random fight generator is a joke, it will play you like the game says. a fool looking for a cunt. Start for one week with games that push you a little then all of a sudden pops on opponenets that are so over powered it’s not possible to have thier cards and be the level they are without having spent 1000’s of dollers. Then when you spend 20 bucks the game adapts and allows you do win for a period of time. This is the phsycological equivilant of a crack dealer giving you a freebie to start. Play the game for free, if you spend more than 20.00 a month go play a real game that costs 15 dollers a month like wow or almost any honest game. THIS GAME IS DESTRUCTIVE

200 bucks is a lot, but since I run my own operation I can afford expenses like this. It also helps that I’m promoting the games, it gives me credibility that I play them and spend on the occasional micro-transaction.

I stand by my word that it’s a fun game.

Also, it’s not like you have to buy in to play. You get tons of free cards all the time, while the match-making pits you up against players of your power level.

It is not a bad game, and in addition to what it’s already said:
*If you play this game on a browser in windows, you get to experience minor bug and game break glitch on a daily or weekly bases.
*I am in league 9, and I haven’t paid any money so far. The cards that cost money to acquire are fundamentally overpowered. Those cards are design to make you pay-to-win. And every player, bot and human, has those cards pass League 13. It’s not the funnest game, and it takes a lot of patience to overlook the cheapness of that aspect in the game.
*I haven’t paid any money so far because I don’t trust their payment method.
*Some female cards acting as bosses in the journey feature are voiced by male. Made to sound like transgender card, but I am sure it’s just a technical laziness.
*The music gets boring after the first few days, and I have been playing it for 12 months. Because I have no life @_@
*The guild competition in this game happens in the Turf War mini game. A game that is designed to unfairly punish guild that is winning to encourage the purchase of boost currency in the game. When I first found out about this, a small part of my nolive died.
*This game requires constant card game to advance, and players often play against bots instead of other players. Of course, the game doesn’t tell you whether the opposition is a bot or a player, and you need to be the judge of a tunning test to tell.
*The anime porn image is decent.
*The text based sex scene is very very lame.
*There is occasional story event that allows the player to undertake a journey to gather different sets of card. In order to apply through any of it when it is available, the player must pay-to-complete the story event. It is ridiculously impractical to complete without USD.
#offtoplayGTAMMO

I’ve often wondered about facing bots in PVP, I’m not opposed to it, but quite often I’m left wondering if the bots at times can just magically choose the exact card it needs for a situation. Like I’ll only need to take 4 health to win, they need to take 100, I’ve left 1 lane open, got about 5 cards on the board and then they bust out literally the only card in the game that would win it for them. Today I had filled my entire side of the board, was on track to annihilate the other side, they only had 1 card down, then out of no where they play the mushroom card that deals ridiculous amount of damage to surrounding cards every time a card dies. It chain reactions and I lose my entire board of cards in a turn.

You left something important out of your review. All matches are P v AI (not PvP). You never play against a real person, just an AI tweaked to make you think it is real people, and to get you to pay.

I’ve noticed odd behavior in some of my opponents, which corroborates your statement, ie. they don’t use their spells ever. But I’m quite certain that there’s real human players in the mix. What makes you say they’re all bots?

This would be a fun game really if the matchmaking would not put me up against overpowered bots. I share David’s experiences: the game allowed me to win for a while and then keeps stomping me with overpowered “accounts” what happened to be less powerful just a few days ago.

How the hell are my opponents able to send multiple cards against me? I’ve only been able to send one card at a time…..am I missing something? It’s hard to win in PvP when I can only send 1 card, and my opponent is always sending 2 or 3 cards each time!

What are you even talking about? I’m guessing you’re meeting people who play cards that spawn additional minions?

That might be what I saying…not sure. All I know is I run across several opponents where multiple attackers appear on the board, but I can only play 1 card/attacker per turn. I just started playing the game a few days ago….