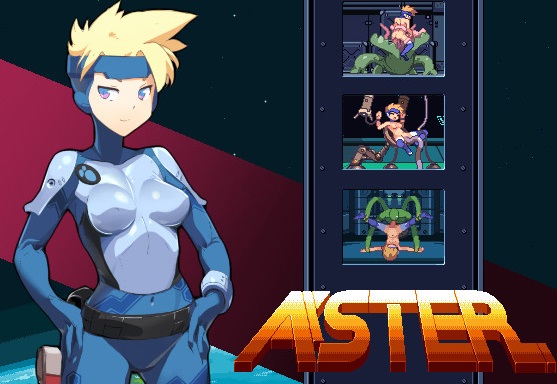 You are a blonde female space cowboy, shooting asteroids. When you boot up, the battle starts immediately after you’ve chosen a space ship, without any dialog or storytelling. Just start killing things!

The ship shoots when you press “C” in your keyboard. Boost by pressing “X”. Press “ESC” for menu.

Similar to old arcade shooters I’ve played over the years, Aster puts you in the cockpit of a space ship floating through the edges of a single screen. You are attacked by asteroids and aliens, and various other enemies. As you shoot at the asteroids, they splinter into smaller rocks, yielding green shards which are the game’s currency. When you are hit by enemies or their projectiles, you lose health. After enough hits, the game is over.

The varied level design features static obstacles that make asteroids, enemies, and your ship bounce from the walls. There’s planets with a gravitational pull, which makes your ship fall down, and down. You encounter missiles that explode into a circle of projectiles, alien war machines that sow bullets everywhere around them. Some alien enemies even have a tractor beam.

Some levels have checkpoints that save your progress. You can resume your play from the main menu, by pressing “continue”. There’s also a shop that appears after you’ve cleared all the enemies in a level. Upgrade your ship with new weapons and improved specs by spending the green shards in the lizard man’s shop.

The weapon upgrades include charge beams, bombs, a laser sword, and more. My favorite was the sword that let me shoot a continuous damaging beam at the enemies. I just kept rolling in circles, destroying everything.

The game is very straightforward. There’s a total of 38 levels to beat, that progressively increase in difficulty.

The background art on the levels is mostly black space dotted with stars. The menus look futuristic, and give a nice sci-fi feel to the experience. Some of the enemies can be hard to make sense of, as they’re often nothing but weirdly colored goo monsters. The projectiles and lasers shot by your sexy space ship look very awesome. The explosions and other effects are professionally done. It was my pleasure to play this game.

The game has a limited soundtrack with very short, smoothly looped songs. I don’t recall hearing more than three songs in total. The songs hype up the ultra violence on screen, but the short length of the songs, will make you want to switch channels after just your second play session. The songs in the menu and the shop screen, are very chill in contrast to the battle track. Sometimes after I died, the music would be offline in the checkpoint screen, until I entered the warp to the next stage.

Aster has no voice acting. I played 13 of the 38 levels, and heard not one voiced line.

Aster is a fun space shooter that doesn’t innovate from familiar formulas. Anybody can pick this game up, hop in to blow up big fat rocks and nasty aliens. The controls are great, but the varying gravity adds a level of difficulty, that can frustrate the lesser skilled nerds who never won anything in their life. Not everybody has the balls to beat a game that doesn’t hand out the victories on a platter.

You can download Aster at Nutaku’s web store for $4.00.