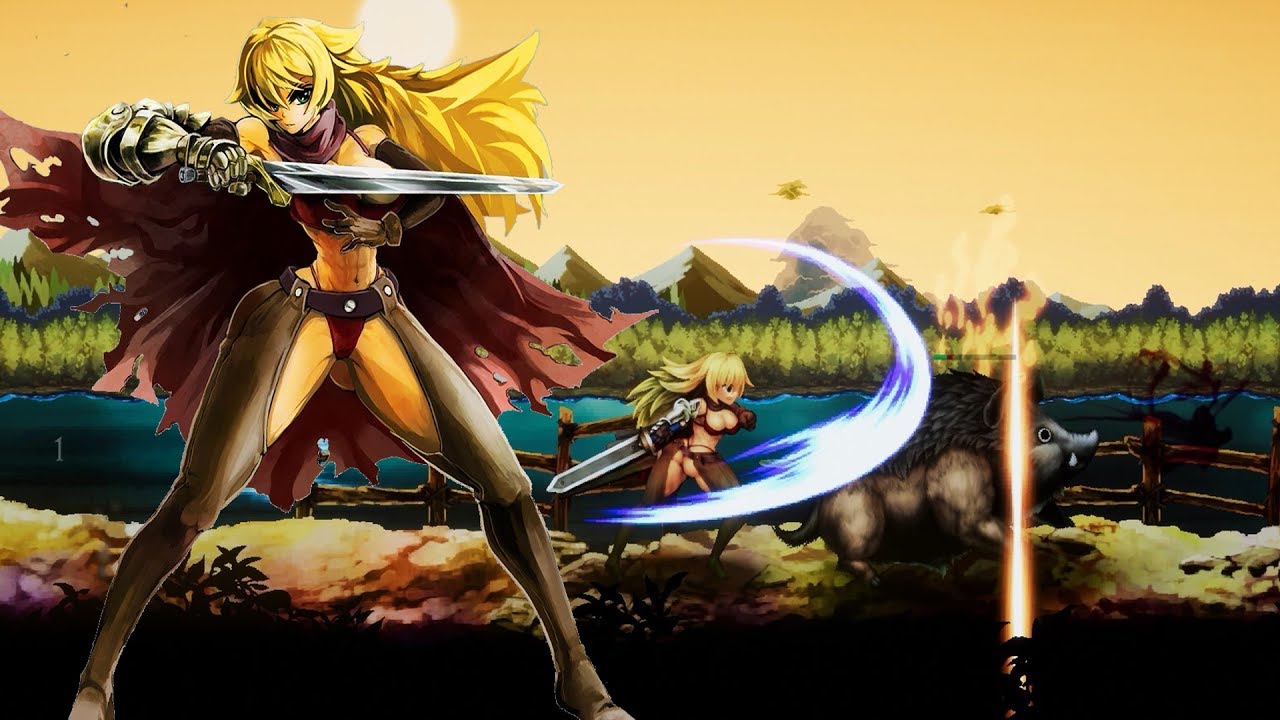 You are an empowered female sellsword from a poverty-stricken single-mother household on a mission to reconnect with your deadbeat father. In this apolitical hack and slash action adventure game, you employ neither diplomacy nor your wits to solve your problems, only good old-fashioned ultra violence. 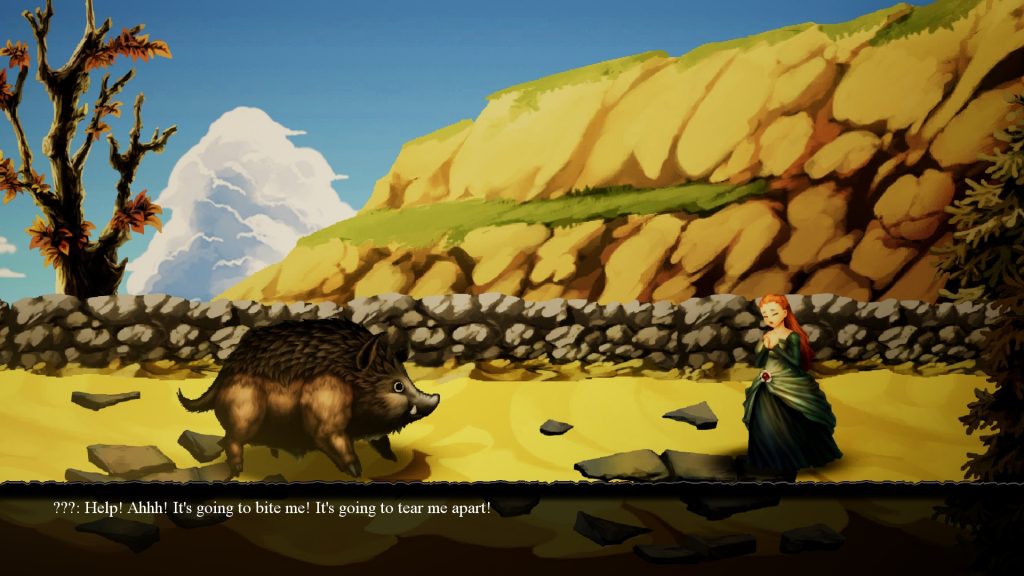 The Vagrant opens with a punchy cutscene. You see the sellsword Vivian on a journey to find her lost father. He was driven mad by a mysterious book, and abandoned his family. Vivian desires to learn the truth of what happened.

She arrives at an island port. There, a mysterious owl-headed figure appears in her cabin. The owl prophetizes that her future is full of suffering. The prophesy becomes reality fast: Vivian’s ship gets wrecked by a savage storm. She wakes up on the shore of a village. Desperate and hungry, she comes across a woman under attack by a boar, which the sellsword cuts down swiftly. After thanking her for saving her life, the woman then tricks Vivian into helping her elope. She’s in love with the town’s blacksmith apprentice, but is engaged to the son of the village’s chief.

When Vivian and the woman reach the blacksmith’s apprentice, the man is already dead. Crushed by his death, the woman sends Vivian back to the village. Upon her return, she encounters a soul reaper. She’s almost killed in the ensuing battle, but she’s saved by a powerful witch. She thanks the witch for saving her, but the witch extorts Vivian into doing her bidding. After all that setup, the story gets rolling. It’s going to be one rocky road for the swordswoman. 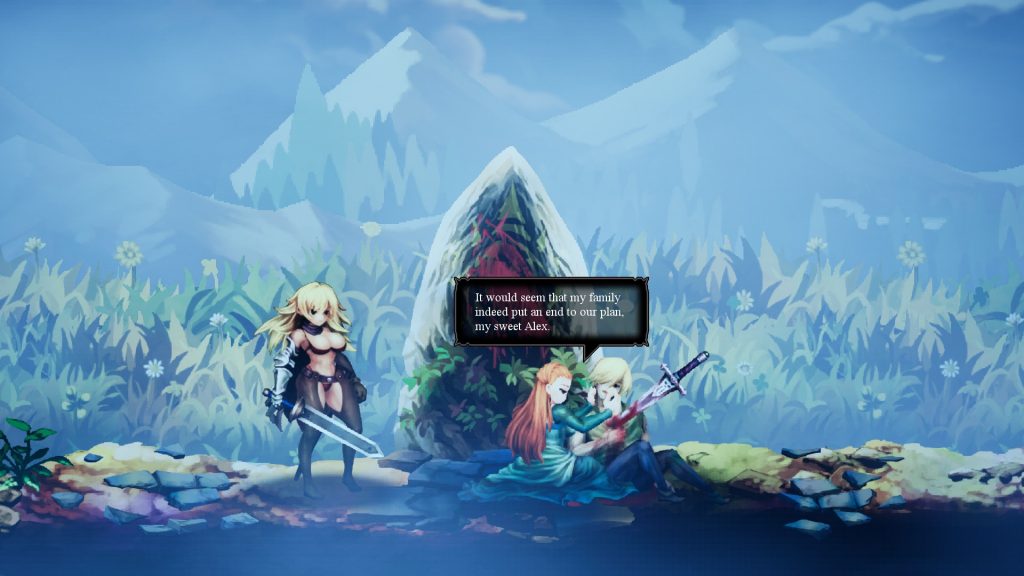 The tone of the story surprised me. I expected big jiggly tits and mindless button-mashing. Instead, I got an engaging story full of twists and turns. The first twist was the true identity of the killer of the blacksmith’s apprentice.

Upon discovering her lover’s dead body, the woman returns home. Next time you see her, she’s hugging a pot plant, and even talking to it. Broken by grief, the woman lost her mind. Meanwhile, other townsfolk start treating Vivian with rejection. They blame you for the soul reaper’s attack. Later events are similarly dark, and I loved it. The experience was a nice change of pace from the sappy, happy hentai games I’ve been writing about lately. Not only is the story interesting, but it has multiple endings. Many of these endings are unlocked when you fail to defeat a boss monster. Remember to save your game often.

Though this game is published by the infamous SakuraGame, known for their trashy translations, this release was uncharacteristically well written. The Vagrant doesn’t read like it was written by Google translate. 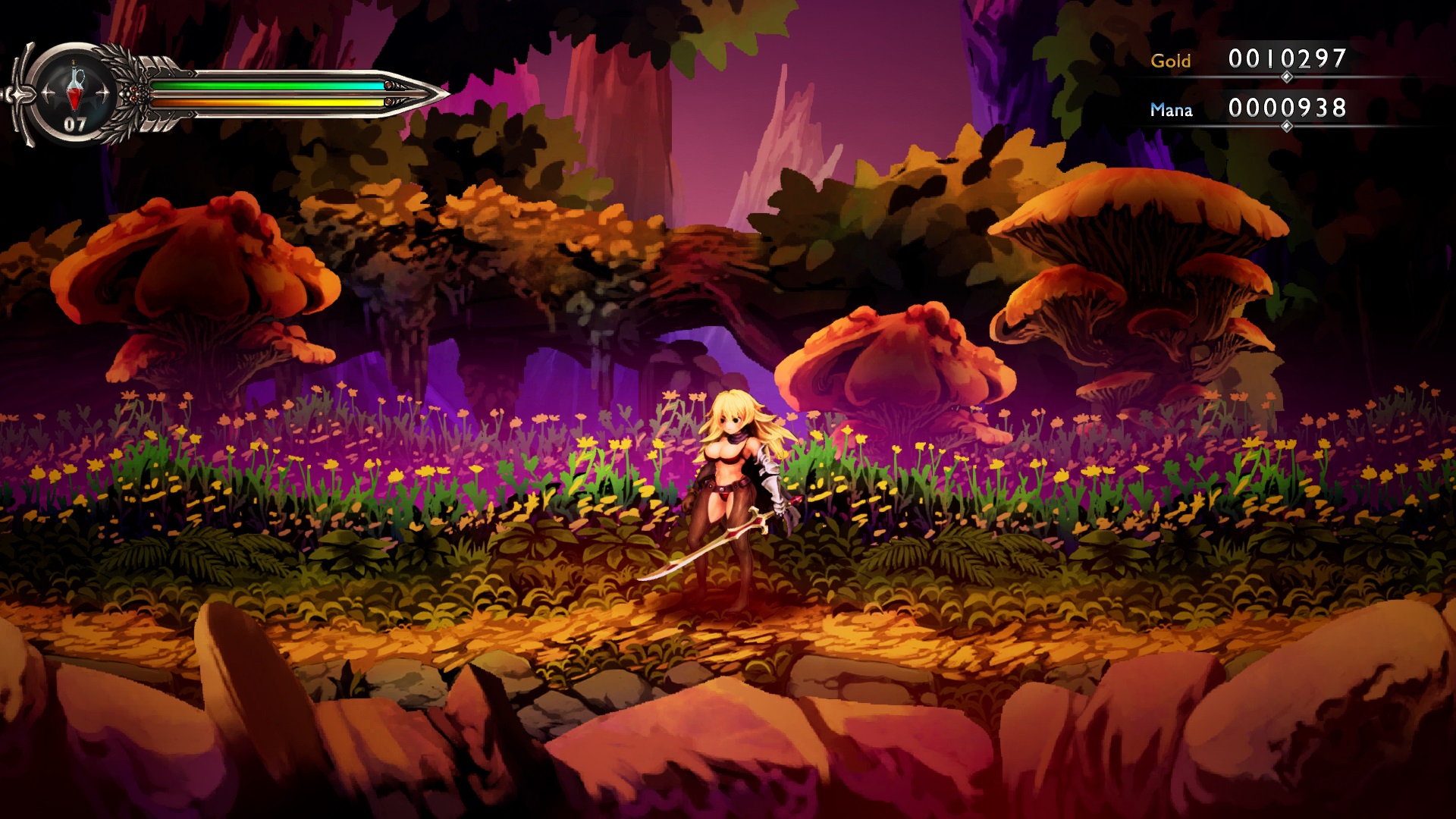 The art reminds me of Dragon’s Crown. Everything looks hand-painted. It’s an eye catching, gorgeous style and full of beautiful details. Playing the game feels like walking through an art exhibition. The developer ensured that aesthetics are consistent despite the very lively style. The first village is a picturesque countryside. Pigs and chickens scuttle around. The fields are full of crops. Villagers are clothed in basic garb and gowns while nobles wear embroidered dresses.

Character sprites are also hand-drawn. To add to the immersion, NPCs occasionally move when you talk to them.

The only real problem with the graphics is that sometimes the assets blend together a little too seamlessly. Objects you can interact with are hard to separate from the lush backgrounds. 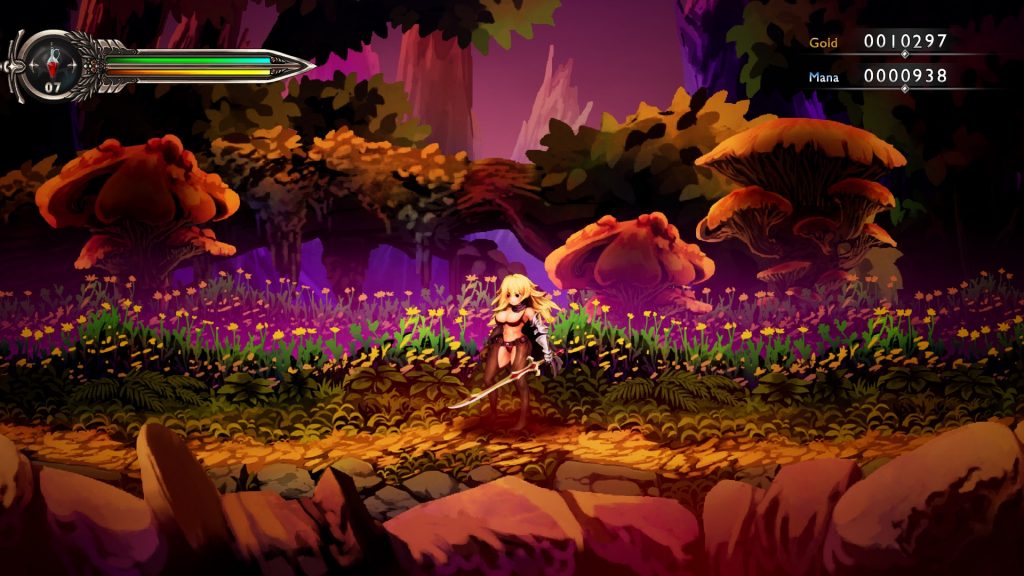 The Vagrant has partial voice acting. Dialogue during cutscenes is silent, but interacting with NPCs will prompt voiced greetings. There are occasions where generic phrases are replaced with voiced lines. For example, if you don’t buy an item from a merchant, they will tell you to scram, or insinuate you have poor taste. I found this hilarious. The game keeps reminding the player that Vivian is a total nobody. No one cares what she feels or thinks.

Sound effects are highly varied. Menial actions like navigating menus, or drinking potions, prompts unique sounds. When you kill an enemy, you hear a heavy ‘bang’ that’s utterly satisfying like you broke something with a jackhammer.

The audio library is professionally recorded. All the sounds blend seamlessly with the action-focused gameplay. I was happy to not spot any royalty-free stock sounds that keep popping in the cheap-ass games we review.

Save the world from big tech! Read our unbiased review of ‘Hikari! Clover Rescue’

I was surprised by the soundtrack’s level of quality. There’s a healthy variety of tracks for different moods and dramatic events. The song changes depending on the situation. The first tracks are forgettable, but the music gets better as the game progresses. When Vivian explores the first village, the music wasn’t very engaging.

However, when the love-struck girl found the body of her boyfriend, a sinister song played. A chorus of violins created an intensely eerie atmosphere. The creepy sound effects added to grim atmosphere. 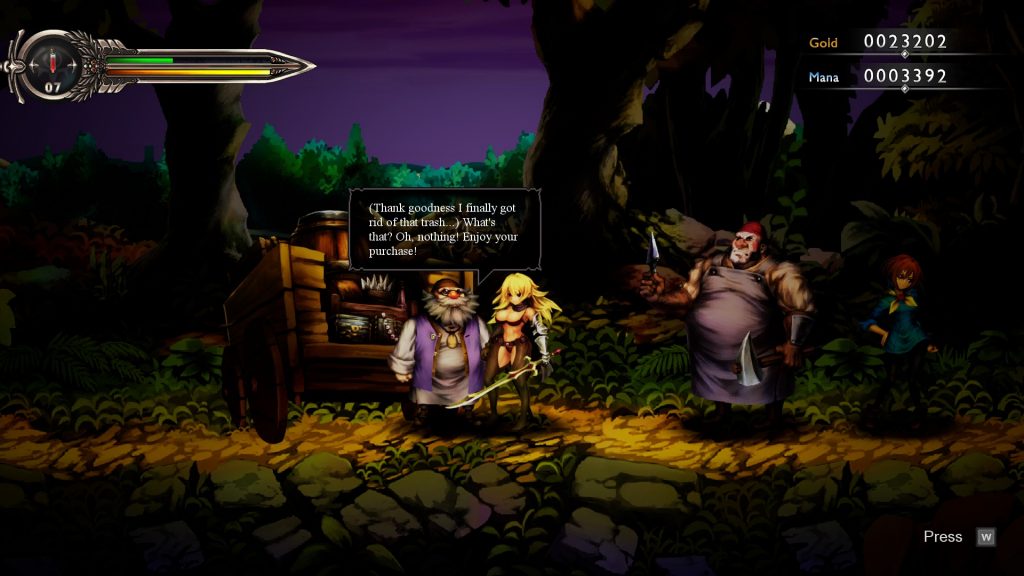 The Vagrant has four game modes: Easy, Normal, Hard and Lunatic. Choose harder modes for a challenge. You can play with either a keyboard, or controller. I tested both and found no issues in either.

The meat of the game is the hack and slash action. You control Vivian through her violent adventures. Enemies of all shapes and sizes try to kill her, and it’s satisfying to murder their faces before they get their stab in. The battles can get repetitive though. You can execute powerful combos to dispatch enemies, though there were times when the game didn’t register my button presses. It was annoying, but not game-breaking. 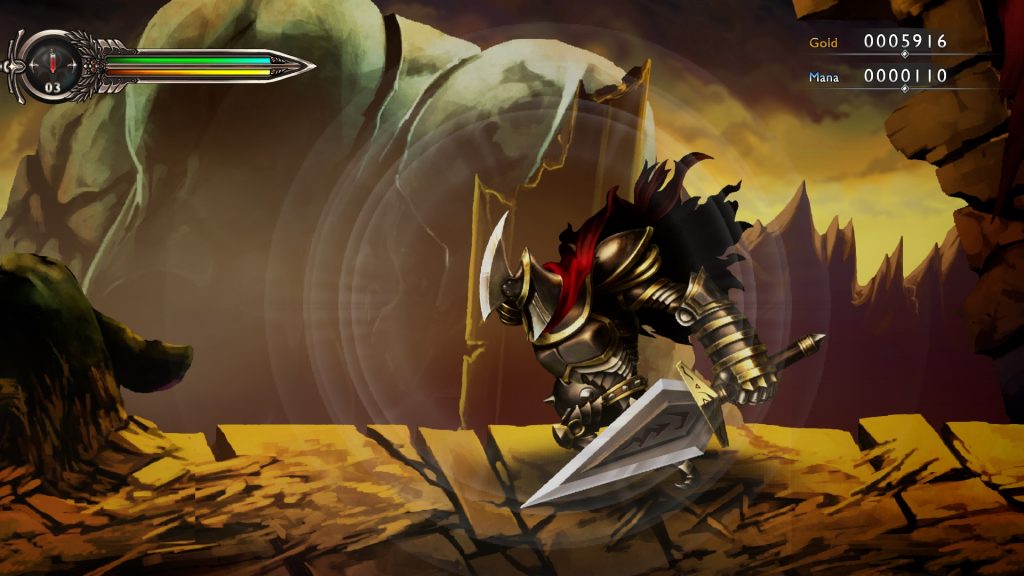 The list of enemies is long. You kill everything from nightmarish ghouls, to beasts, to gigantic boss monsters. While the monsters’ visual designs are gorgeous, their artificial intelligence sucks. Some enemies won’t attack you despite Vivian standing right in front of them. You can cheese some enemy types by forcing them into a corner and spamming attack. This won’t work on stronger baddies though.

The Vagrant has a talent tree. Monsters drop mana, which you spend to unlock skills in the tree. You can easily farm mana through by exploration, and grinding monsters. Some abilities are passive, others make new combat moves available.

Equipment can be enchanted. You can use rune stones to enchant your weapon or armour for extra advantages. For example, you can enchant your sword with more attack power. It’s nothing flashy to improve flat numbers, but still fun.

Some weapons have elemental affinities. A fire element weapon deals extra damage. Ice weapons slow the enemy, and lightning weapons cause damage to multiple nearby enemies. 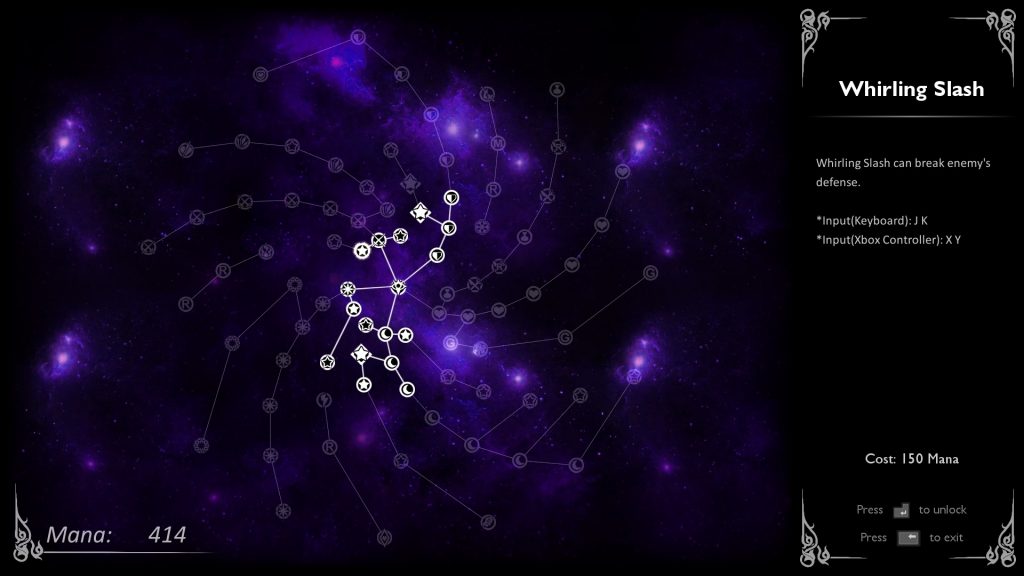 The game doesn’t bombard you with all these mechanics. You have ample time to learn the basic controls. When new mechanics are introduced later on, you build on your past learning. The experience is organic and fluid.

If you’re confused about anything, there is an in-game instruction manual you can read any time.

The harder platforming segments require precise controls, which is hard to achieve using a controller. I had to use my keyboard to beat them. Thankfully, those moments were rare. 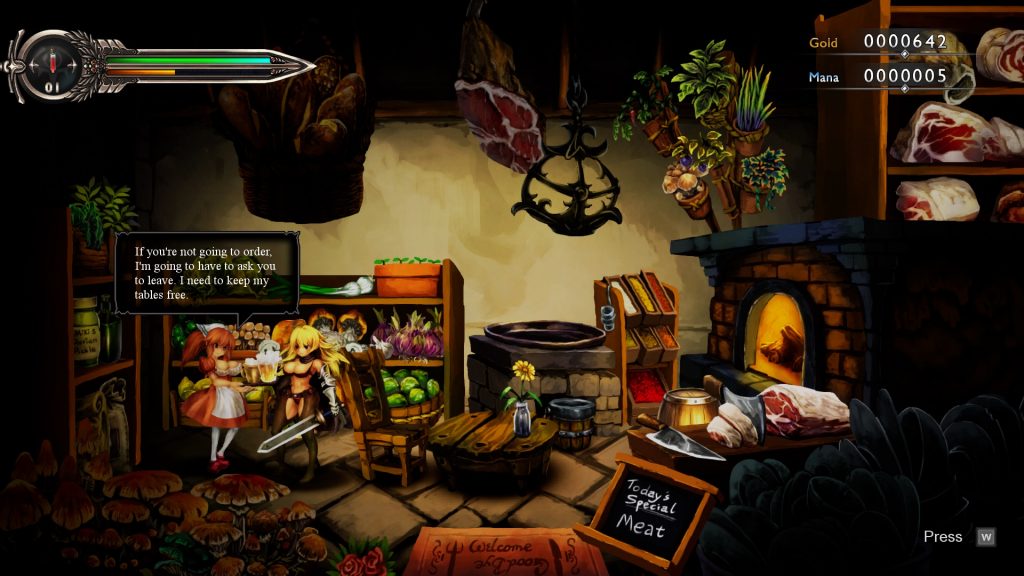 The Vagrant is an unbelievably fun game. The graphics are gorgeous to the point of mouth-watering.. The story is interesting, with plot twists and tragic outcomes. The gameplay is solid, if somewhat repetitive. This game is the kind of quality more developers should strive for. I absolutely recommend this title, it is a highly underrated gem.

Do yourself a favor and download The Vagrant. All sales support our writing and comic production