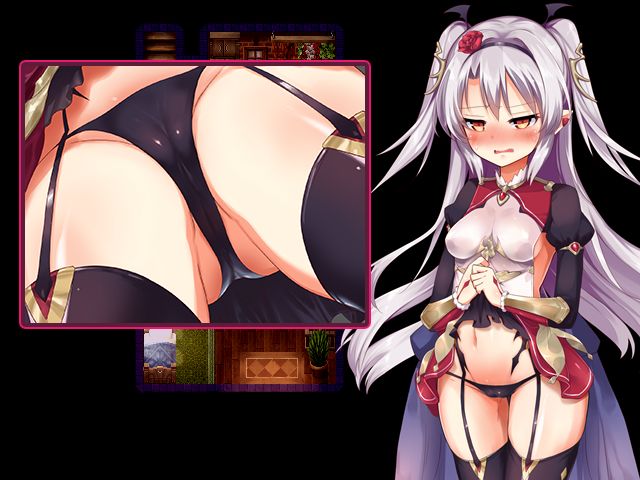 Alicia is a vampire gamer girl who loves mobile gaming. She sold a priceless family heirloom to the lord of the town, to pay for more micro transactions. He will give the heirloom back if you help him recover some artifacts. Once you get them, the obvious bad guy reveals he was a bad guy all along who wanted to use the artifacts for evil things.

There was a lot of potential in this story, but it was never realized. You have a vampire hunter, a powerful crime gang in the city slums, a mysterious cult, and a cute vampire girl with super powers. All these things sound exciting, but only play a tiny part in the story.

The game takes control of your character about once every ten minutes. You have to watch a cutscene of your sprite walking, read very long speeches, and other nonsense. Also, your character gets KO’d and defeated in cutscenes many times. It makes you feel like you have no control over the story. You could be level 99, and still be defeated by a squirrel, because the plot demands it.

Use arrow keys for movement. Press ‘Z’ to talk to NPCs and activate items. The ‘X’ button cancels dialog and menu choices. Press CTRL during combat to speed up animations and advance to your next turn. Press Shift to hide text boxes during dialogue.

The pause menu offers a quick save and quick load function. If you’re hunting down all the sex scenes, you’ll be using this a lot. Will Alicia lose her virginity during her sleep? Or maybe she was hypnotized? Just quicksave to see all the scenes.

A hint function can be activated from the pause menu. This will create arrows on the map that tell you where to go. You can speak to your traveling companion for directions as well. The developers hold your hand through every challenge.

Level-ups in this game happen very slowly. There are only two equipment slots to fill. The game can be completed in four hours, with your level being 12 or lower. This RPG is missing a sense of progression and growth. Your character barely gets stronger.

The art is Japanese anime style. There are over 400 images total and 60 sex scenes to view.

The developer released this game in December 2018, but has been updating it as recently as late April 2019. Originally the game had far fewer images and scenes, but it’s been growing dramatically with each update. The store page claims there are 44 scenes, but the updates have raised the total to 60.

Only five sex scenes have full screen CGs. All other scenes mix character stills and cut-in images to convey what’s happening. There are over 300 cut-in images, so the variety is sure to keep you satisfied.

The cut-in images are square boxes to the left of the character art. They offer clothing variations and numerous angles on each situation. You can see Alicia’s pussy from the front and below. I loved this little feature.

Minor animation is used throughout the story. Alicia’s hair poofs upward when she is surprised. She rocks back and forth when she sleeps. Her traveling companion also has some minor sprite animations. Great attention to detail!

Vampire Notes has no voice acting.

The soundtrack has 51 songs. Almost all of them are unique compositions with copyrights owned by the developer. Many songs are recycled from their previous titles. Violin, harp, and cello come together to form a classical tune that fits the setting. The problem is, the game is far too short to use all 51 songs. As I listened to the soundtrack after beating the game, I noticed I never heard half of these tracks.

Vampire Notes has a total of 60 sexy scenes, with over 300 cut-in images. Almost half of all scenes involve groping or peeping, with no wild fetishes explored. The DLSite page for this game advertises pregnancy and impregnation, but that’s a lie. Alicia might mention that she was impregnated, but it has no impact beyond that. There is no visual cue and there are no consequences. A single line of dialogue is not enough to justify calling this an “impregnation game”.