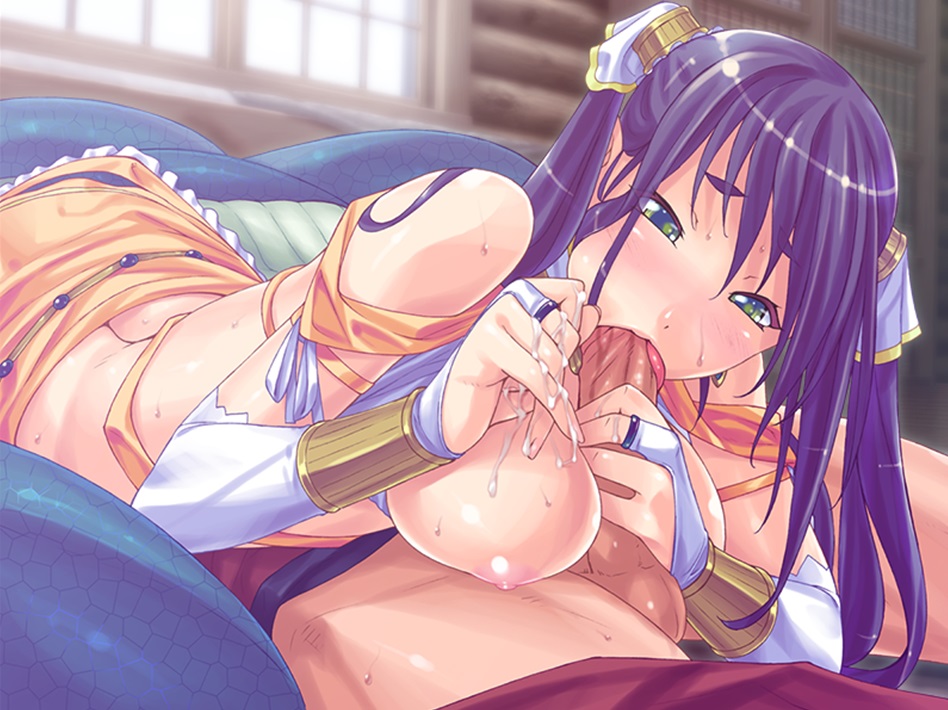 When they were children, Light promised to marry his childhood crush, Leimia, when they both grew up. Years later, he is shocked when she tracks him down to his cabin in the woods, demanding he hold up his end of the promise. The only problem is Light really can’t remember Leimia anymore. She’s also a complete tsundere, a lamia, and really fucking pushy.

Light is living off-grid in a cabin in the woods, growing his vegetables and enjoying a laid back life. His relaxing rural life style is turned upside-down when the half-snake, half-human girl Leimia shows up on his doorstep demanding him to marry her. Light can’t remember ever promising to marry a snake girl, but he remembers quickly when Leimia sucks his dick.

When they were little, Light made a promise to marry Leimia when they grow up. Determined not to give up, Leimia decides to move in with Light and help Light remember how much he used to care about her. She accomplishes this by employing the ultimate weapon of cliché anime tropes, such as baiting him to walk in on her naked, cooking for him, and having lots of mind blowing monster sex.

The writing for Life with a Lamia is surprisingly good. The Japanese-to-English translation contains one or two grammatical mishaps and spelling errors, but nothing immersion-breaking.

The game also has a surprisingly good plot despite being paper thin. It isn’t a masterpiece of storytelling but a twist just before the third act puts the entire front half of the story into a different perspective.

Light is a pretty pathetic character the first time you meet him. He is a generic guy. He acts as the only sane man in the story pointing out when things don’t make sense. He is also very wimpy and sexually inexperienced which makes it difficult to understand how Leimia could’ve fallen so hard him. Thankfully he improves on his wimpiness and as a sex partner as the story progresses.

Leimia is the star of the story. She sports generous tits, and a cute face. Her personality is something between a flirty teaser, and a hardcore tsundere, which is the source of a lot of the jokes. The jokes that rely on tsundere traits are hit and miss but overall Leimia is a fun character and very fuckable. The story really showcases the depth of her love for Light. She’s willing to go to any lengths to prove herself to him. She gives him amazing sexual experiences as part of her seduction process. Leimia doesn’t really grow as a character.

The graphics in Life with a Lamia are stylish. The character sprite for Leimia is sexy when it needs to be with beautiful camera angles highlighting just how fuckable she is. Her proportions stay consistent in-between shots and the game gives her a wide variety of facial expressions both inside and outside of H-scenes. Her character design also contains a shit load of subtle detail from the bracelets she wears to the light lines in her hair. These details really make you feel like a lot of attention was given to make her as realistically lewd as possible.

The background artwork is limited. Background art is stylish, but overall very generic, with only a few details.

Life with a Lamia is a visual novel. Clicking the textbox advances the story. The game features normal visual novel functionalities, such as a ‘skip’ and ‘auto’ button for smooth play. There is also a Gallery menu that is unlocked once you complete the game where you can view all the sex artwork and H-scenes. This game is mostly kinetic, but features several choices which lead to different endings. These endings are followed by Leimia complaining about how you made the ‘wrong’ choice despite gaining a happy or bad ending.

Life with a Lamia is fully voiced. Leimia’s actress gives an average performance. Her sex moans and squeals are better than her normal dialogue with plenty of cutesy gasps that’ll make any heterosexual male hard as rock. Unfortunately when she needs to deliver anything other than sex sounds, her performance falls into the generic category with little feeling. There are some stand out scenes when the actress gives a better performance, but these moments are few and far between.

Life with a Lamia has terrible sound effects. The world is barely populated with any audio. There were opportunities to add a sound to waterfalls, footsteps on wooden floors, and so on. There are generic crowd and forest noises, but no sex sounds.

The music featured in Life with a Lamia is good and bad for a multitude of reasons. There’s 15 tracks in total. There’s an extremely large variety of tracks. There’s songs that are fast-paced, cheerful, cheeky, upbeat, romantic, comedic and depressing.

Almost every song uses a combination of synthetic and real-life instruments to create a very memorable soundtrack. These tracks feature a large assortment of instruments like the xylophone, flute, drums, guitar and keyboard. The most memorable song features a slow guitar and piano number that is equal parts depressing and uplifting.

Unfortunately, Life with a Lamia‘s diverse musical selection is also its biggest crutch. Most of the soundtrack has a unique feel to it, but many songs feel very out of place for a rom-com game about a guy fucking a snake girl. There is a heavy metal song that feels tacked on. The music created a tonal imbalance in the game that made me want to mute it.

Light eventually gets to stick his dick in her mouth and blow his load on her face before moving on to taking her virginity. The scenes become longer each time with every kink explored before moving on to the next encounter. The game also uses this technique to steadily build Leimia and Light’s relationship in an organic manner that mirrors real-life couples.

My favorite encounter between the two is when Light finally gets to nail Leimia’s pussy. The dialogue for the scene is sexy as hell. There’s a brief surprise and embarrassment from Leimia who is normally the dominant one.