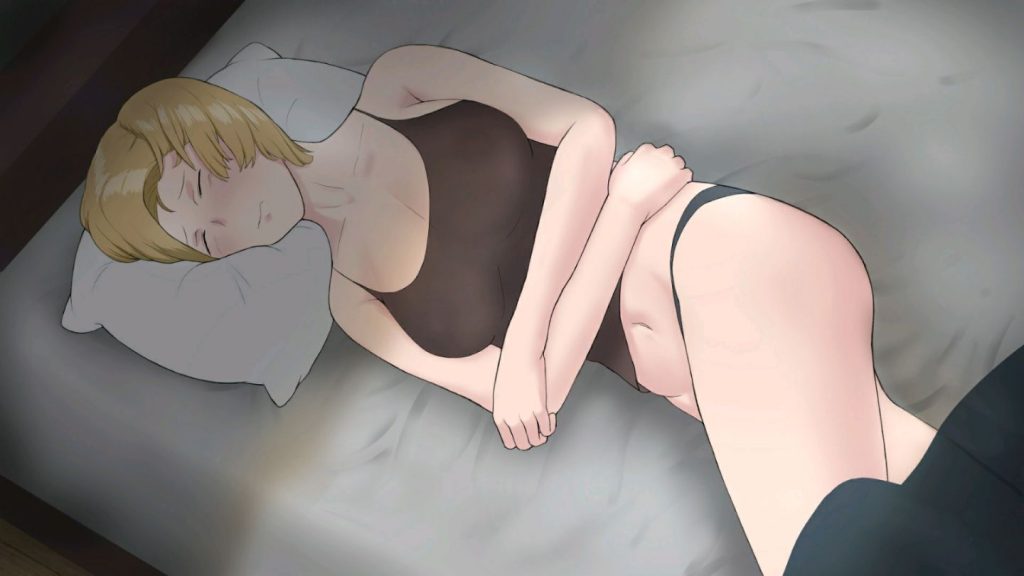 After losing your job, you and your wife are forced to move in with your father. The problem is, your old man is a savvy businessman and womanizer! Let’s hope your wife can resist his charming personality!

The player’s perspective is constantly changing. It makes things hard to follow. Sometimes you’re making choices for the wife, other times for the husband. It’s confusing, and breaks your immersion when you try to figure out what’s going on.

The plot is terrible. I genuinely don’t know how or why the wife suddenly loves old man dick. She changed completely in such a short amount of time, it’s very hard to believe.

There are two endings. One is “NTR” and the other is the “happy” ending. Will your father impregnate your wife? Or will she become a prostitute and get impregnated by someone else? Either way, these endings are terribly written. There was never any indication she would become a hooker. These endings come completely out of the blue.

The ending is not influenced by your in-game choices. Instead, it is based on a single decision in the last line of dialogue of the game. This means you can make any choices and do anything you want, and it won’t effect your ending.

Halfway through the game, the player meets and speaks to a woman named Emi. She talks about her son Eijii. This is a reference to the game “A Small Village”, by the same developer.

After the halfway point, your boss is fucking your wife off-screen. This gets no development, no CG images, and has no player choices involved. You can skip through that dialogue and miss nothing, because their interactions are never shown.

The plot failed to keep my attention after the first hour. She already cheated, so of course I know she will cheat again. The story needs to either escalate or come to a resolution, but it doesn’t. It drags on too long.

Overall the writing in this game was downright terrible. It was believable at first, but slowly becomes meaningless. At one point your wife demands that another man impregnate her, and it had no build up. It was completely out of the blue.

Rural Homecoming is a visual novel. Click the screen to ‘turn the page’. Press CTRL to skip dialogue. Press spacebar to hide the textbox. Scroll up to review past dialogue. Bookmark your progress by saving the game into the many available save slots.

There are 13 choices in this game. Most of the choices happen early on in the story. There comes a point where half an hour passes with no choices whatsoever, and it’s very disappointing. Even when choices do appear, they only decide if you view a scene or not. Only one choice affects the story, and it decides which ending you get.

The game will take about two hours to complete. Scenes in the recollection room must be found manually, and will not be unlocked by completing the game.

The art is a cartoonish variation on the Japanese anime style. Visuals are inconsistent, especially with the grandfather. His height and facial features change constantly, to the point where he doesn’t even seem like the same person.

Numerous assets are reused from previous titles by this developer. These include cut-in images like the cellphone, and countryside background images. The variety is fantastic, but more unique assets would have been appreciated! Many scenes just fade to black. The dialogue is there, but the screen is completely blank!

The female lead lets out an occasional moaning sound during sex scenes.

Sound effects are limited. The sounds of a creaking bed, and the door sliding open are very exciting in context! The music cuts to silence and the footsteps become the focus of the scene! I enjoyed this focus on detail a lot, I only wish it led to an exciting payoff.

The soundtrack includes a handful of weak original tracks.

The NTR theme is a pure, simplistic piano piece. It sounds ominous and ambient, but I found it amateurish and very generic. The melody is horrible. It’s the equivalent of playing one guitar chord and calling it a song. The music is forgettable.

The corruption is done horribly. Your wife changes completely in a very short time. She goes from disgust to demanding an elderly man to impregnate her. She only spoke to him a few times. The progression is too fast!

The story says your wife is sleeping with your boss, but you never actually see it. This was a massive disappointment, and it seems like the developer just didn’t want to spend the money and time to complete those scenes.

I recommend this game to fans of netorare and cheating wives. Download Rural Homecoming. You can support the developer on Patreon. If you like this developer and want an NTR game with more content, check out our review of Adelaide Inn.