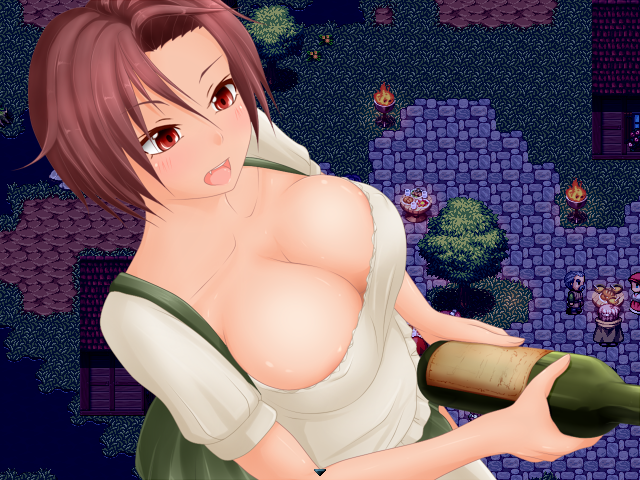 Vera is finally ready to begin her life as an adventurer! Leaving home for the first time ever, she sets out on a grand adventure to deliver an important letter and explore a world of sexual opportunities!

Vera is the daughter of the local blacksmith, and dreams of becoming a famous adventurer. She finally gets her chance when the feudal lord sends her to deliver a letter. She doesn’t realize that it’s the first step in her grand adventure!

The story follows Vera as she goes on tour throughout the region. There isn’t really an overall plot. The game relies more on smaller side quests. The storytelling is forgettable and not very cohesive. We hear about feudal lords, local ruffians, and it’s implied that Vera’s best friend is a lesbian. None of these plot points go anywhere, and it feels like the entire journey lacks purpose. Without a clear goal, or end point in sight, it’s hard to get invested in the story.

Vera’s Region Tour Diary was created with the RPG Maker game engine. Use the arrow keys to move. Press Z and X to interact with the world. Press W to hide text boxes. Press A to view the message log.

The game cycle is simple. Defeat enemies to earn money which you spend in town in exchange for items. As you grow stronger, you’ll be able to explore more of the world around you.

This game starts out promising and becomes more irritating over time. The free roaming gameplay allows players to explore and access regions they’re not meant to be in. This is both a blessing and a curse. It’s cool because you can find equipment and treasure that was meant for late-game characters. It sucks because all the enemies are incredibly overpowered. If you’re not sure where to go next, and decide to explore, the game punishes you. Punishing the player for exploring is the worst decision a develop could make.

There are many moments when it’s unclear how to progress. This is so common a problem, that fans have even created full game walkthroughs, to help you when you get stuck. For example, you cannot progress past the festival until you drink tons of alcohol. This means if you refuse alcohol, you’ll be unable to complete the game.

If you can look past these flaws, the game is great! You have five towns, with carriage travel between them, and multiple side quests! Your choices will unlock one of the multiple endings. You can start a “New Game Plus” to breeze through the game and explore more endings. There are at least five hours of content.

The art is Japanese anime style. The lines are soft, there’s less focus on detail. Four characters are given unique sprites for dialogue scenes. Each character has at least five expressions and multiples outfits. For the protagonist, there are 9 outfits with four levels of clothing damage each.

Outside of character stills, there are 450 CGs in total, spread across 42 scenes. Multiple scenes have variations for whether you lose your virginity or not. These variations reflect Vera’s inexperience or knowledge when it comes to sexual affairs.

Significant attention is given to in-game sprites. There is a unique sprite for every outfit and damage level. For example, the sports bra which is half broken, has unique art. This attention to detail is absolutely insane.

From the very start of the game, the player can strip Vera nude and talk to random NPCs. Some will grope her while others will look away in shame. Each NPC has unique dialogue depending on your clothing and progress through the game.

The world map is absolutely gorgeous. Unique textures are used frequently in combination with stock RPG Maker assets to create a truly original world for the player to explore. From the deep dark caverns to the hot and steamy sauna, every area is distinct.

The sound effects are a mixture of stock RPG maker assets and licensed tracks from other sources. They provide life to scenes, where lesser developers would have left things silent. For example, pouring drinks as a bar maid is accompanied by a realistic pouring sound that makes you feel like you’re in a pub. This developer clearly cared about player immersion, and it shows!

There are 37 songs on the soundtrack, most of which are unique to this developer.

There’s a clear preference for string instruments. Where other musicians would use drums, or piano, these tracks mix and match classical stringed instruments to create unique melodies. A low tone from the cello is like the drums holding the beat. A high note from the violin leads the rhythm and melody of the songs. It’s nice to see creativity and unique choices, even if it limits the variety of music.

Vera’s Region Tour Diary has 42 sex scenes in total. Multiple scenes have variations for whether or not Vera is a virgin. There are 450 CGs in total, not counting pose art and character stills.

Other fetishes include thigh sex, flashing, and the occasional forced sex scene. There is no talk of pregnancy or impregnation anywhere in the game, yet Vera still produces breast milk. It’s not realistic, but it sure is hot!