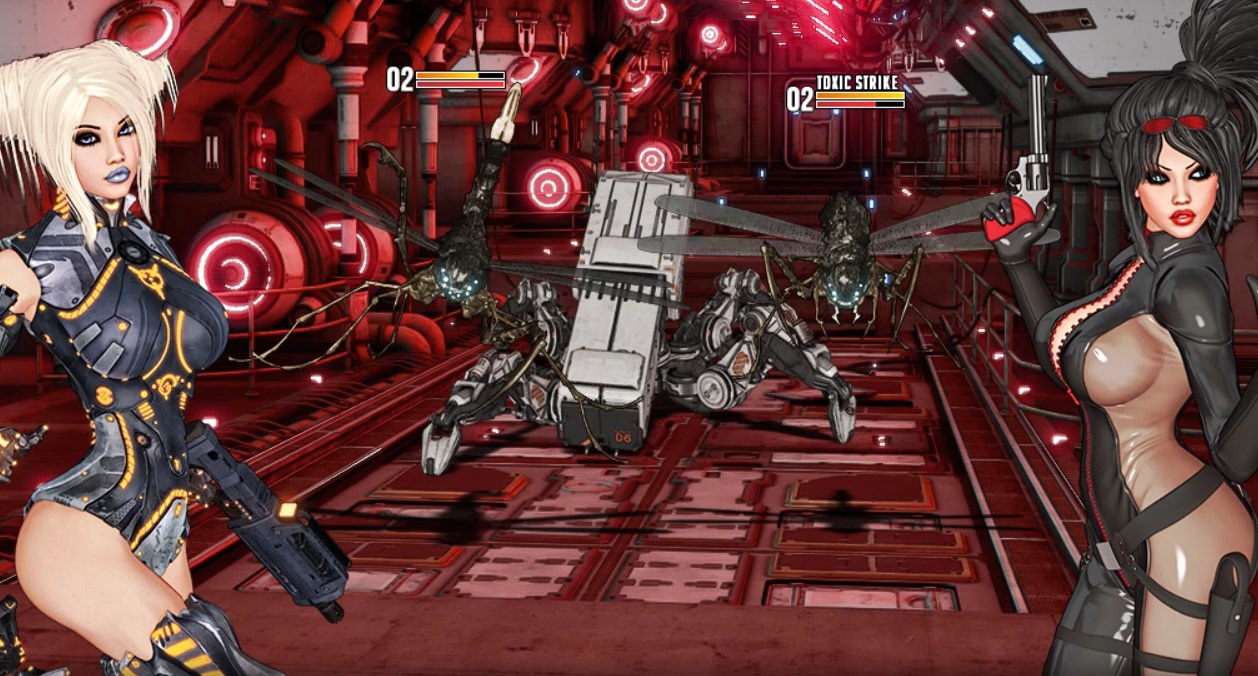 The game I have for you today is Malise and the Machine, an RPG created by Eromancer. It uses an active-time battle system and centers around two characters, Neon and Malise, as they carry out some daring mission in a cyberpunk world. It has all the right ingredients for an intricate story combined with spectacularly drawn art, but everything is pretty much unfinished at the time I played it. Still, the game is accessible for a paltry $3 on Eromancer’s Patreon, so it’s at least worth checking out briefly.

In the latest version of the game, I started in a subterranean setting with just Neon. This busty blonde agent is accompanied by a sarcastic robot that reminds me a lot of Wheatley in the Portal games. His job is basically to inform me of what needs to be done. To the developer’s credit, some of the text is witty enough to be entertaining, so there’s that. Although, the best that the story has to offer is the potential that it sets itself up for. There’s a rich cyberpunk world that Eromancer created here, from the assortment of enemies to the mystery of what you’re supposed to be doing in this mission. But this great setup doesn’t carry itself forward. Probably due to the unfinished nature of the game, but it’s also likely that it will never be finished.

I noticed that the battle system is heavily dependent on cooldown timers. The default system has everything in real time but it is possible to change the battle system to turn-based in the settings. I found that to be preferable so that could I enjoy what I’m looking at. The girls have their regular attacks and their special abilities, of course, plus a defensive stance that’s pretty much useless. Armor damage can occur, and it will leave the agents vulnerable to attacks of a more carnal nature. Speaking of which, these ladies do have an arousal meter that increases after certain attacks. Let this get too high and something called “turboslutting” will occur, which apparently affects the character’s stats and makes them more susceptible to getting sexed up in combat. Heightened arousal is visible on the characters themselves, as well, which I thought was a nice touch.

Outside of battles, the gameplay is pretty much like Pokemon. I’d scurry around in vertical or horizontal directions, and combat phases would unexpectedly trigger. I found the rate of combat encounters to be very balanced: not too many or too few. The first area is a total grind, though. Searching for amp fuses in lockboxes amidst a darkened cyberpunk labyrinth is not my idea of fun, especially since you don’t seem to have a map anywhere. I imagine this turns some players away.

There’s a techno-punk soundtrack playing the whole time. This is rather fitting, since I think Eromancer was trying to create a fast-paced and action-packed RPG. Attacks and special abilities all have their respective sounds, but I didn’t hear any voice acting of any kind. That means you’ll mostly be reading text like a classic RPG.

Now let’s look at the sex! 90% of this occurs in battle, and I only found two sex scenes outside of combat. It’s a lot easier to find these h-scenes when you know the circumstances necessary to make them possible. For example, I noticed that the aptly-named “Pussyreaper” enemy wouldn’t mount me unless my waist armor was destroyed, and that couldn’t happen unless the Vorepup enemy used its “shred” attack on me enough times. So I had to follow a recipe sequence to the scenes I wanted. I had my nicest lewd encounters with the Vorepups, who can swing in to pin the character’s arms and proceed to facefuck her across three phases. Each phase gives you the chance to fight, which damages the assailant, or struggle, which just tries to break free without damage. Your success rate depends on how aroused you are. If you’re “turboslutting” too much, then you might as well select the submit option each time because you won’t find much success with resisting. Overall, combat is pretty easy to manage and the only real challenges arise when there’s multiple enemies to reckon with at the same time. A couple of tentacle monsters and some Assreapers to back them up made me work hard to keep my pants intact, so I appreciated that the developer didn’t make everything a total breeze.

The version that I played is the most recent, official update from Eromancer. There are older versions with different enemies, and it’s not entirely clear why the developer made such a mess with their posted versions. I think they intended to combine all of these different elements into one final release, but that never happened. In fact, the team appears to be working on a new game called Pure Onyx now. Despite Eromancer’s insistence otherwise, Malise and the Machine is probably an abandoned project at this point.

This game has been dead for years. Don’t fall for this review. It has been completely abandoned, for the full history on it. Do a google search for F95 and this games title.