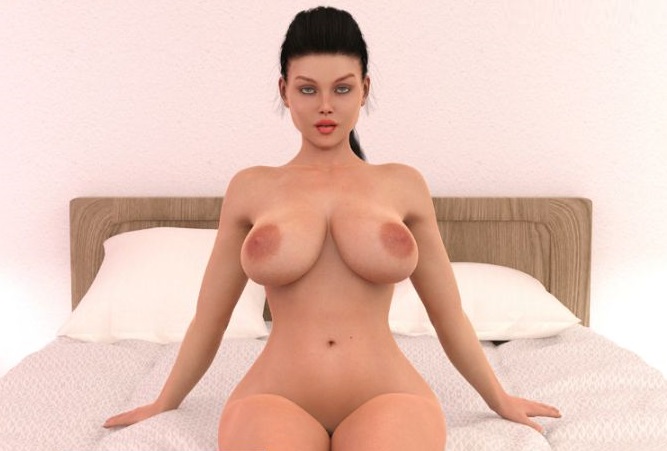 The game is available in multiple languages, but this comes with offsets. The developer designed the storytelling to be simple enough to easily translate into other languages. The content is fine for a first fap, but very boring to return to after you’ve bust a nut.

The story is open-ended. It’s a blessing and a curse. The player has a lot of freedom to progress how they choose, but the story is not cohesive at all. You visit the beach, watch your sisters do yoga, get a part-time job, and occasionally get your dick wet. The story only sets up sex scenes, but offers no interesting plot lines to immerse yourself into.

Man of the House is a visual novel created in the Unity game engine. Click the screen to advance dialogue and make choices. Depending on your in-game location, you’ll be given unique things to do. Gameplay can best be explained as living a second life. Anything and everything you’d expect from a life simulator can be found here.

You have four stats that need to be managed: Sleep, hunger, hygiene, and stress. Manage these stats by taking showers, eating, and spend time at home. Money can be earned from jobs, which will pay more after you get promotions. Whether delivering pizza, or working at the gym, practice makes perfect, and you’ll soon be earning a lot of money to spend at the local mall.

Every character has a daily schedule that varies based on the day of the week. Usually, you’ll find people at home during the morning and afternoon, while they’re out in the world during the day.

To improve your relationship with your stepsisters, compliment them, and stalk them when they attend various events.

You have the illusion of choice as the player. In reality, you don’t have much control over your fate. Go to work, flirt with the ladies, go to sleep, repeat. Good thing there are cheats that speed up the boring parts! Check your in-game phone to use them.

The character models in this game were created with 3D modeling software, then animated for their sex scenes. There are no CGs, all scenes are created with the 3D models and their environment.

The game offers a fairly complex user interface that might scare new players. All your needs and logistical information dot the borders of your screen. Meanwhile, the world is easy to navigate though the “room viewer”. There, you can teleport to whichever room you want. Without that function, navigating the world is a chore.

Each girl has multiple outfits and thousands of positions. This makes the characters seem alive like they’re doing their own things. Sex scenes are fully animated with multiple angles and viewpoints to show all the sexy details when you get a girl in bed.

Man of the House has no voice acting. There are only two sound effects. One is a digital chime when you open the phone. The other is a “dink” sound that plays whenever you click anything. Beyond that, the game is silent.

Man of the House has no music.