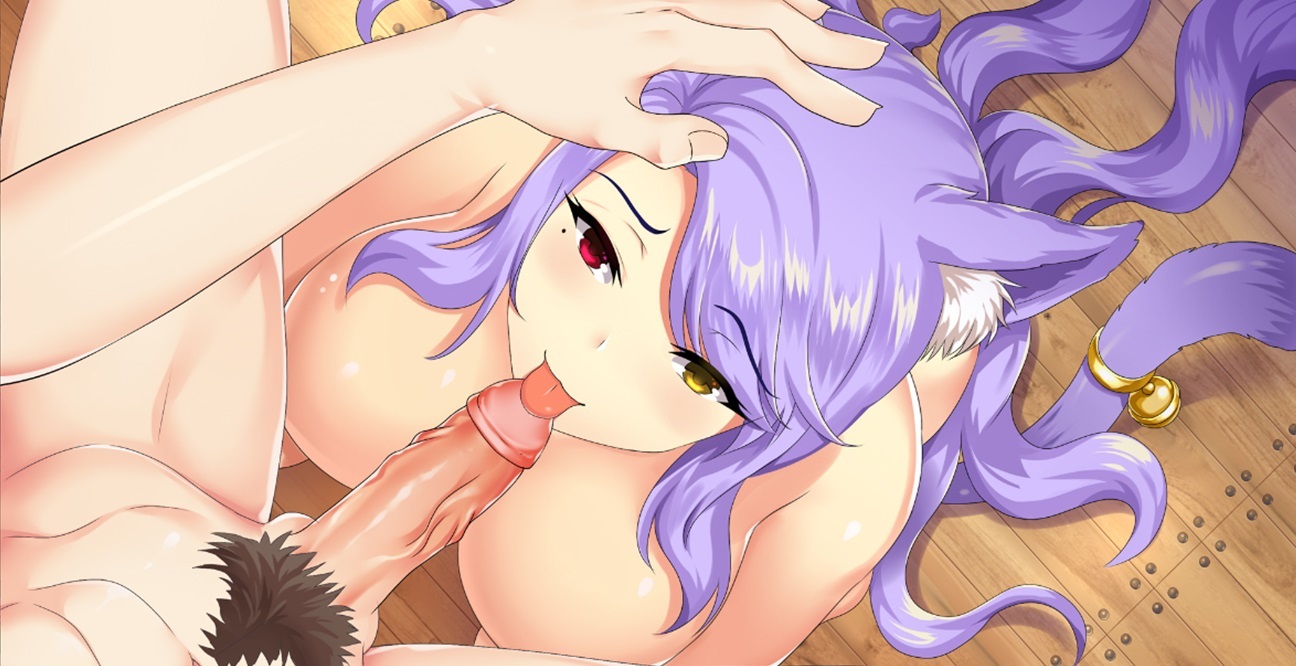 After taking full advantage of Kiara’s wake-up service, you learn that you’ve been transported to another world. You wound up in the middle of a battlefield, but somehow survived with mere injuries. Kiara also tells you that men are in danger of becoming extinct because the natives of this world are killing them. As long as you stay with her, your sperm is protected.

The writing for Kiara Ara Ara is average in quality. The plot is an excuse to fuck smoking hot catgirl pussy. While the story is lackluster, the sex scenes are well crafted. Kiara has a somewhat tragic back story, but neither her or the other characters are explored in any significant detail. The male protagonist is a blank slate of generic niceness. This guy would never get pussy in real life.

The game has limited sound effects. Noises you’ll hear during play include zippers being undone, sexy moaning sounds from Kiara, and soft slurping as she gobbles dick.

Kiara is the only character with voice acting. Her actress has a cute voice. Her line delivery is great with marvelous inflection. She constantly sounds like she is genuinely surprised by what the next line is. During sex scenes her voice stays calm, with a more sensual, flirtatious inflection sprinkled in. Kiara’s hot and heavy moans are stimulating to listen to.

The soundtrack brims with traditional Japanese folk music. Most songs feature soft melodies that ease the player into a state of relaxation. The songs range from mildly romantic to intensely intimate. All the tracks have a unique and entertaining sound. Some tracks are playful, befitting of the casual nature of the events taking place. The music is comprised of original instruments such as piano, various wind instruments and string plucking.

Kiara and My Ara Ara Adventure is a visual novel game with basic functionality. You click the screen to “turn the page”. Throughout the game you are presented with choices. These choices can build or destroy your budding relationship with Kiara, ultimately determining which of the three potential endings you get. There are more than 10 unique costumes to unlock during your interactions with Kiara.

During sex scenes the dialogue box changes form. The game also features a gallery for viewing CG artwork. Use the ‘auto’ and ‘skip’ buttons to fap with both hands. The game has enough save slots to keep track of your progress.

The artwork in the game is exquisite. The CGs have vibrant coloring and they’re rich in detail. Kiara’s sprite design is fabulously cute with an attractive body and huge tits made for fucking. Kiara has a lot of different facial expressions, but sadly, she has no alternate poses.

Background art is limited in quality but beautiful to gaze at. The areas are distinctly Japanese and lovingly crafted by the artist to look realistic and fantastical simultaneously. The artist showcases mastery over lighting and shadows on the background art, which has multiple variants for different times of day. Most of the game takes place at night-time.

That artwork is BEAUTIFUL!