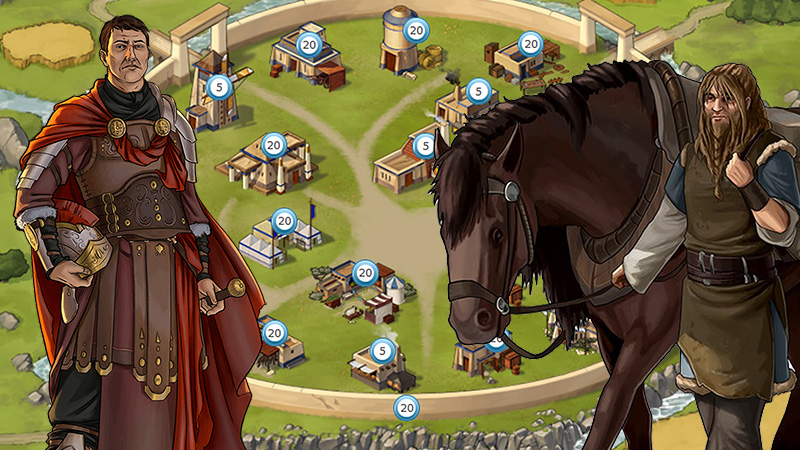 You are the ruthless regent of your own little kingdom of darkness that aggressively grows its military, slaughters its neighbors and plunders them to the bone like a bloodthirsty alien species. Conveyed by an anemic, buggy interface where colors and icons change and disappear randomly, all-out world war has never been less visceral.

The game has multiple races that favor different playstyles from the industrious Romans to the defensive Gauls.

The bulk of the gameplay is spent upgrading various buildings and resource fields in your villages. Nothing upgrades instantly, you have to wait through a timer. If you’re an aggressive player, you can attack other players on their off-hours and steal their resources and speed up your growth. Allowing players to vandalize each other on-demand is what makes Travian such an incredible experience.

Absolutely everything that you spend weeks and months building can be destroyed or stolen by another player. They can kill your army, conquer your villages, steal your resources, even raze your capitol to the ground with catapults!

Building new villages requires culture points. You have a progression bar for culture points on the right side that fills up every day. Once the bar is full, you can start a new village. You can also boost the culture point accumulation by spending resources in the Town Hall. You can have a Town Hall in all your villages. You can also buy items called “artwork” from the auction house, which boost your points.

While the visual spectacle is relegated to your imagination, the war aspect of the game feels exciting, due to the enormous investment of time you spend to build up your kingdom. It pulls on your heart strings just to see that red tick on your screen indicating an incoming attack.

The battles in Travian are simple math equations. The attacking army and defending army clash, all damage multipliers are applied, and shit dies. If your attacking power is greater than the defender’s defensive power, the defender loses everything and your surviving troops loot the village. Then, you can steal resources from your defenseless victim as much as you like.

The game doesn’t end when you lose your army, but it can be difficult to get out of a bad position. I was farmed for weeks by a neighboring player before my kingdom was strong enough and my army large enough to qualify for a local alliance, which provided protection.

Another great mechanic in Travian is the hero. You have a special unit called a “hero” that gains experience in fights. The hero’s power is much greater than the average unit, and he grants an army-wide defense and attack aura. While your army may die to the last man, the hero can be resurrected, now massively leveled up. You can also level up your hero by attacking animals in the nearby unoccupied oases.

The gameplay is very simple, once you can read the interface. It’s one of those games that’s easy to learn but difficult to master. Once you get into the battle mechanics and the alliance coordination, you’ll notice that the game isn’t all build orders and resource juggling, but politics and teamwork.

Alliances are in a perpetual arms race. Alliances can break apart, merge into confederations, split into factions, anything can happen! During my review period, my alliance changed leadership and name multiple times, merged into a massive confederation, we gained and lost members, warred with an enemy confederation, forged a non-aggression pact with a local alliance and broke the pact when it suited us.

This game is as Macchiavellian as it gets. You can be eliminated from the game by a raiding player’s catapult onslaught. Your alliance can be infested with moles and double-agents gathering intel for an enemy. Some do it for fun, others may see their alliance as weak, and use their position to slither into a better organized alliance that actually stands a chance at winning the game.

To play Travian effectively as a team game, you have to use some off-site tools. Gettertools.com is a website where you can post your troops numbers, for easy viewing of your alliance leadership.

In the age of Discord, communications between alliance members is better than ever. Coordinated war campaigns are relatively easy to execute. A war campaign is set up by days, even weeks of “fakes” (19 basic units and one 1 catapult) to multiple enemy villages, followed up by massive attacks on enemy capitols, usually targeting their wheat fields and granaries.

A game of Travian does not last forever. The game ends in a massive harmageddon-style event that lasts for months. A powerful ancient race called the Natars emerge, bringing with them artifacts. The goal of the game is to build a Wonder of the World using Natarian technology. The Wonder is a huge structure that symbolizes the might of your alliance. Competing alliances are also building their own Wonder of the World, while attacking the Wonders of their competitors.

The business model of the game is the usual free to play model. The game offers various perks and boosts in exchange for gold, the premium currency in the game. You can boost your resource production by 25% in all villages for a week, instantly complete buildings, and much more. I personally bought some €60.00 worth of gold, which lasted almost the entire duration of the game world.

Travian Legends is a great game, but it’s a very involved experience. If you’re working on your computer all day, it makes for a great distraction. It’s easy to learn, difficult to master, and very satisfying once you know what you’re doing. All the mechanics are well-designed and let you have a balanced, anarchic war strategy experience. I recommend this app to everyone who enjoys medieval aesthetics and technology.

You can play Travian: Legends for free at the official Travian website.