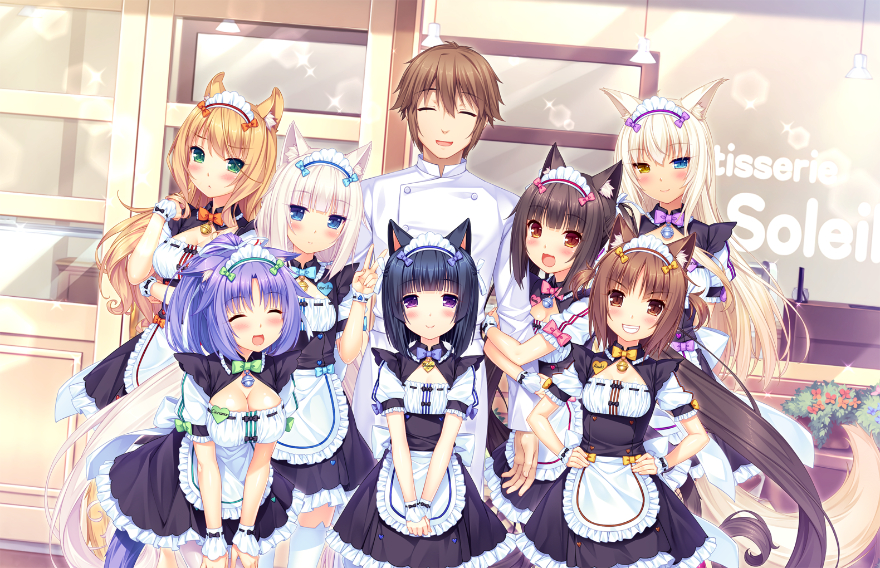 There are currently six games in the Nekopara series.

Nekopara 1 was released November 21, 2014. The protagonist (Kashou) has suddenly left home to start his very own cake shop. He tried to leave his family behind, but his two catgirls followed after! Chocola and Vanilla want to teach Kashou the meaning of family and love!

Nekopara 2 was released February 19, 2016. Business is booming at Kashou’s store! But a sisterly quarrel may soon tear his family asunder! Help Azuki and Coconut reconcile.

Nekopara 3 was released May 25, 2017. One of the family catgirls seems to be suffering in silence. People always call her “that catgirl” and “pretty talented for a catgirl”. She wants to be recognized as an individual! Help Maple and Cinnamon make their grand musical debut!

Nekopara 4 was released November 26, 2020. Kashou’s father doesn’t approve of the cake shop! And when he tries to make a cake to beat his father, he’s completely outmatched. With determination and love, Kashou’s catgirls help him through these troubled times. But what Kashou needs most, is the advice of his mentor in faraway Paris France!

Nekopara 0 was released August 15, 2015. This game focuses on the month before Kashou starts his shop. In this short slice of life game, all six catgirls eat, play, and sleep in one happy household. There is no sexual content or overall story.

Nekopara Extra was released July 27, 2018. This game focuses on the final three months before Kashou started his shop. Chocola, Vanilla, and Coconut are all still young kittens. The plot of this game was adapted into a 20 minute OVA film. There is no sexual content.

Kashou Minazuki is the protagonist of the series. Raised from a young age to inherit his father’s pastry empire, Kashou has always had an interest in baking. Although he’s helpful and kind, he has a tendency to push others away and get caught up in his own thoughts.

Shigure Minazuki is the younger sister of Kashou. She’s still in schooling and is one of the few characters not sexually involved with Kashou. In the first three games, she explicitly says she aims to be his “lover”, but this is toned down in the more recent releases. She raised the six catgirls and runs the blog that has promoted Kashou’s business.

Chocola and Vanilla are the youngest catgirls of the Minazuki family. They are the primary focus of the first game, as inseparable catgirl sisters. While Chocola is energetic and naive, Vanilla is soft-spoken and relaxed. They view Shigure as a close friend, but Kashou as their master.

Azuki is the short brunette in a sailor outfit. She’s the eldest catgirl and generally the most mature. She insults people jokingly to hide her true feelings. Of course, underneath that sarcasm is a heart of gold.

Maple is the tall blonde catgirl with the most ladylike demeanor. She’s the second eldest catgirl. Maple pretends to be arrogant to hide her true feelings. Secretly she wants to be a famous singer, but she never tries until the third game.

Coconut is the tall tan catgirl with heterochromatic eyes and bleach blonde hair. As the fourth catgirl, she’s a bit childish just like Chocola and Vanilla. As a clumsy doofus, she’s vulnerable to feeling insecure at times.

If you want to play the games in chronological order, you need to start with Nekopara Extra. Then you play games 0-4.

Feel free to skip Nekopara Zero, as it adds nothing to the story. I highly recommend playing in order of release. This is because Nekopara Extra foreshadows the events of Nekopara Four.

The story follows the timeline above. We know this due to context clues throughout the series. For example, in Nekopara Extra their sickness is described as “the other day”, implying it happened within the month. And Kashou mentions his plans to start the bakery “next year”.

The Nekopara series was ported to Playstation 4 and Nintendo Switch in 2018. A spin-off dancing game was released in June of 2016. As of 2020, the series has sold over 3 million copies total.

Refer to the Nekopara Wikipedia page for information on the Manga, television show, OVA, and mobile game.