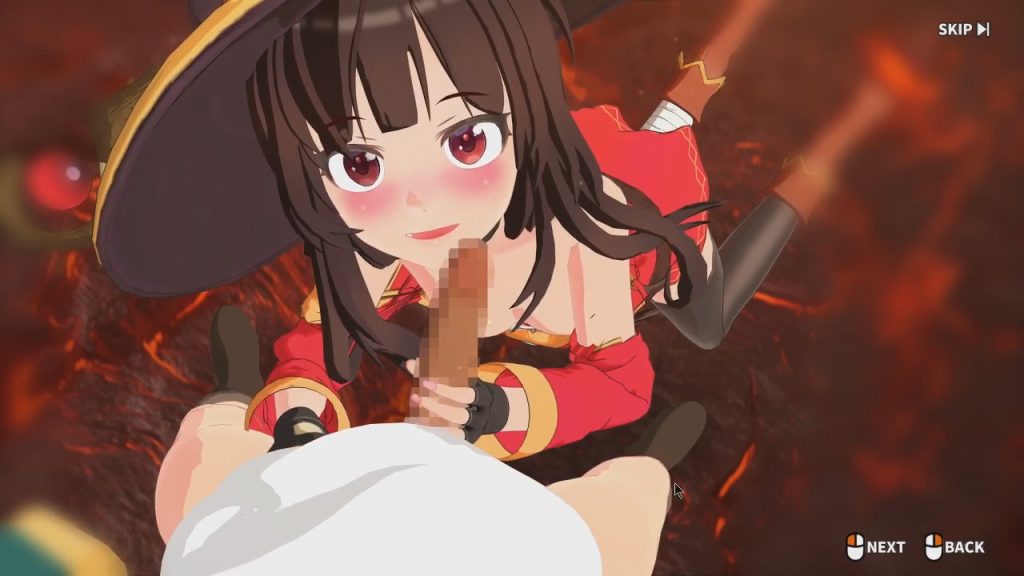 The story is set up via a short conversation at the start of the game. Run away from the headless night to beat the game. There are four levels in total, culminating in Kazuma and Megumin having sex together to celebrate their escape.

Explosion Girl is a side-scroller running game focused on keeping pace and never slowing down. Move with the arrow keys. Press Shift to run. Press Space to jump. Press Q to charge and cast your explosion spell. Press ‘up’ to climb vines. Rapidly tap left and right to escape when grabbed. Rapidly tab Space to grab and climb a ledge.

Like in the show, Megumin has a long speech before casting her explosion spell. Also like the show, she becomes extremely weak after casting it, making her vulnerable to fondling and fucking. Assuming you never cast it, you should be able to beat the game without ever getting fucked.

There are four levels in total, with few if any checkpoints. The jumping can be unresponsive at times, but overall the game is pretty fun. It should take an hour to beat, and two hours if you plan to track down and view all the scenes.

Where bugs can occur, is during the gameplay. The collision detection on certain surfaces is off in often unpredictable ways. Sometimes you can stand on thin air, other times you fall without warning. This is especially problematic on the last level where lots of climbing and jumping are required. It becomes hard, not due to strategy, but due to the unpredictable collision of your surroundings.

There are 30 scenes in the gallery. In the zoomed out sex between character models, players can customize Megumin’s outfits in four variations ranging from fully clothed to fully nude.

There are only four stages. The first is a forest run, the second transitions the forest to a cave, the third is a dark cave where you can barely see in front of you, and the fourth is the lava stage. Naturally, the lava stage is the most exciting and iconic, because it’s so different than all the rest. Still, I wish there were at least ten stages in total.

Although the game is available in three languages, the voiced lines are all in Japanese. While Dub fans of Konosuba will find this wonderful, fans of the japanese subtitled version will likely notice that this voice actress is different from Megumin’s anime counterpart.

But that’s weeaboo shit. It’s a hentai game, performance matters more than likeness! And in this case, the female voice actress did a fantastic job, perfectly conveying shock, fear, and pleasure all throughout her scenes. Each scenario is a little different, and so too are the performances. Megumin sounds extra scared in the lava zone, but more lustful and overwhelmed with pleasure in the forest zone. For a short indie title, this actress put her all into her performance and it shows. I applaud her for both the quality and the quantity of lines she delivered. Even knowing it’s for a small developer, she still gave a fully professional, fantastic performance.

The sound effects in this game are largely focused on climbing, running, and explosions. Naturally it doesn’t sound exactly identical to the anime, but these sound assets were still damn good!

There are under ten tracks in total. Even for such a short and simple game, the developer had great attention to detail by putting unique tracks in each stage and varying background music for the scenes. For example, heavy use of violin enhances the drama of the lava stage, while soft and quiet piano emphasize the loneliness of the dark cave stage. This is great sound design, even if the game is limited in scope.