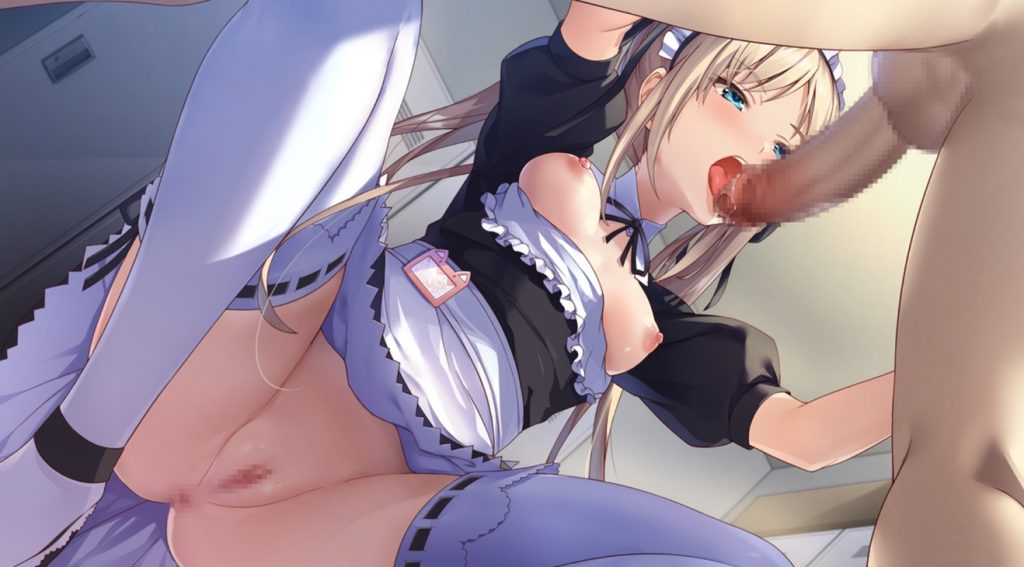 In this final installment of Fantasy Tavern Sextet, you come face to face with Anzu, your colleague from Earth. You have to find a way to return home, have sex with Anzu and pop the cute nun Plumeria’s cherry before you go. Time to get busy!

Also check out our review of Fantasy Tavern Sextet Vol. 2.

Postlude Days picks up twenty minutes after the previous title. Your junior from Earth, the bitchy tsundere Anzu, reveals that she has been transported to this world too, but has been here for over a year. She berates you and manages to stir things up with your harem.

It’s not long before she scores a job at your tavern and attracts all kinds of trouble. There is a really shady customer that keeps harassing her, but Anzu refuses to tell anyone what’s going on until it’s too late. Elsewhere in the story, you accompany Plumeria to a new city where a library holds the key to returning you home.

Unfortunately, most of the other girls in your harem are pushed to the background. It’s fair since all four have had their time to shine, but Postlude Days has several opportunities where Dahlia could have been more integral to the story. I would have liked if the issue of being separated from you was explored in more depth with the remaining girls as well.

The game’s main girls are fully voiced. Rin Mitaka and Mochi Morisawa return to play Lupine and Daisy. Dahlia and Veronica are sidetracked to give more focus to Prumeria and Anzu, played by Konoe Yuzuko and Tsubakino Nao. The actress for Anzu steals the show by playing the most adorable tsundere. Prumeria also excels as the shy girl. Both actresses have good range and can easily make you feel for the girls.

The game features a surprise guest appearance by a character from another one of the studio’s games. The actress also gives a sharp performance for the little screen-time they have. Sound effects include cutting ropes, thuds, magical sparkles, hits, rain, water and loads of impact and abstract anime noises. The ambience in certain scenes can be a little too loud sometimes.

Fantasy Tavern Sextet is a visual novel game. You click the screen to “turn the page” to advance the story. Throughout the game you are presented with choices. Depending on your decisions, you will build a healthy or alienating relationship with Plumeria or Anzu. If they dislike you, you get no pussy. If they love you, you get two more girls to worship your dick.

Like previous installments, there is a Gallery to view unlocked CGs, as well as multiple save slots to ensure you can get all the endings. There are three endings to get. You can use the ‘Skip’ and ‘Auto’ buttons and fap in between scenes.

The game reuses backgrounds and sprites from the previous title. Character designs remain top tier. The lack of new poses is disappointing. The game makes up for this by using clever camera trickery like placing one sprite further away in the background. Plumeria and Anzu have a variety of facial expressions.

This game uses the 2.5D animations to give characters a 3D feel to them. Sprite bodies will idle slightly, heads will tilt, lips and eyes will open and close and breasts will jut side to side.

The game’s artwork is top tier CGs rich in detail. The colors and lighting are beautifully captured and pop when you look at them. Carrying over assets from previous games means this installment can afford to splurge on fantastic artwork. There are one or two newly added backgrounds that live up to the high standard of the other titles. Background art is large and the camera will rotate during sweeping shots.

The entire soundtrack from the previous titles are carried over. Songs use original instruments like the xylophone, flute and keyboard.

In this title, your goal is to charm, fuck, and add Plumeria and Anza into your harem. I liked charming Anzu more because seeing tsunderes melt as I fuck their brains out is more gratifying than dominating a shrinking violet.

Sex with Plumeria feels kinkier by comparison. The lord has imbued the girl with the sacred holy knowledge of how to suck a dick and not some cheap two-dollar whore. The artwork is stunning with nice camera angles and exquisite facial expressions. Later sex scenes feel more mundane but still managed to make me wet.

Fantasy Tavern Sextet, Vol 3 wraps up the series in a neat little bow. The increase in your harem size does mean you get to spend less time with your favorite girls, but the high production values, attention to detail and story and the wonderful voice over more than make up for it.

We can recommend this game. Download Fantasy Tavern Sextet, Vol 3!