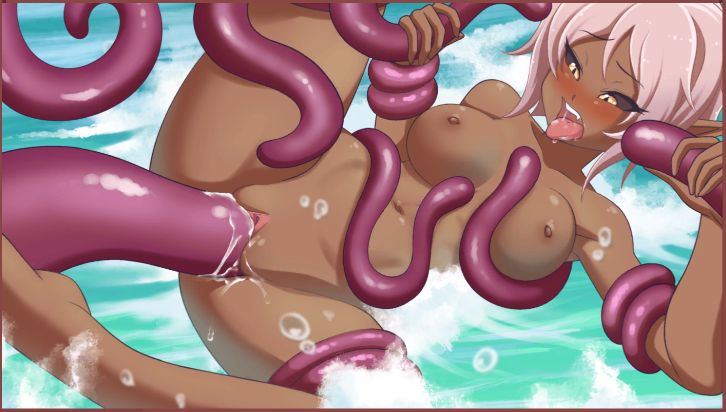 You unlock and level up women from the five factions in the game and fight enemies while getting cock-teased into perpetual grinding for sexy scenes. In Eros Fantasy, you will enjoy a long journey filled with boobs and battles!

This game barely has a story, but I’ll write something. You don’t play as one specific character, you level up each of them. You get new characters as you progress. You travel around fighting enemies to create peace. You meet on your journey humans, beastfolk, demons, and mermaid warriors. The one main male character in the story is the prince and you travel around with him. So basically the prince is surrounded by only women from different races. As you can guess, you eventually have sex with your little entourage!

You move through a large map by completing each level. Each level has two parts and each part has multiple battles that you need to win. And as a reward for completing each level, you get a sex scene with one the girls. These sex scenes themselves do not have animations and are just pictures. These pictures can feature anything from basic sex to tentacles.

One specific detail you might notice is that Alexandra has a crush on the Prince and is a shy person. Adding to that, Audrey is the first person to have sex with the Prince and Xenia also had a past relationship with him. The character interactions are engaging while you play, but not much to write about.

Your battle harem heavily relies on magic when fighting. Rachel for example is a muscular busty beastfolk woman who has an affinity for plants and consistently uses her magic to increase her defenses.

The gameplay consists of picking your best characters fit for the battle during the ‘town action’. You then go around clicking enemies to lower their health bars. You can also click your own characters to increase their energy bar. When your character’s energy bar is filled, you are able to use their special move. Some characters are a defensive type, so their special move will involve them increasing their own or the group’s defenses. Other characters are the aggressive type and they will make a big attack inflicting lots of damage once their energy bar is filled. And finally, there is the healer type. But wait, there’s more! Each character will either be a fire type, water type, or plant type. When preparing for battle you will need to keep these things in mind because each type is stronger than one of the other types.

Going into detail on the characters’ powers, Ivy is a fire type and attack type, Xenia is a water type and a defensive type, Gabriela is a plant and attack type. In this game you will see more combinations of types and races. You will need to strategize the you play.

This being a free to play game, there is an in-game shop where you can buy different items and skins. You can also get a chest using gems which give you cards of your characters, and if you get enough of these cards, then your character will get a star which makes them more valuable and stronger.

There is a daily mission section where you can collect your rewards after completing a daily mission. There is an idle rewards system that generates coins, gems, and EXP when you are not playing. And besides the story, you can play in tournaments, dates, journeys, and in events.

The art is well done. The characters have unique designs and their clothing gets more revealing the more stars she has. Some of the characters start off with armor, dresses showing a bit of cleavage, or clothes mainly showing their bellies.

As for the gameplay graphics, they’re decent. The models look different compared to the ones outside of the gameplay. The characters are in fact chibi versions of themselves. The setting changes as you progress through the levels. You might be fighting in a forest, inside of a kingdom, or at night.

Due to the different factions, you get many cool and unique designs. The characters even have different body types from muscular to thick and petite. And because of that, when you unlock a girl, you feel satisfied and rewarded.

There is no voice acting and the sounds during the gameplay are only decent. You hear basic clashes and attack cues, not much else.

The game has three decent tracks. The music on the screen has an upbeat feeling, same with the music during the actual gameplay. As for the music on the homescreen, it is peaceful. The songs have an adventurous feeling to them. It all fits very well into the context. And if you want to, you can turn the music and/or sound off in the game’s settings.

You grind and once your character has a certain amount of stars, their clothing gets more revealing. You unlock pictures when you complete each level. And after you complete a level, you might get a sexy picture showing dick sucking, vaginal action, and more freaky things. So you will be curious as to what the next scene will be.

You get scenes with every race, but keep in mind that the mermaid race for example comes later. There’s a healthy amount of content to plow through, many girls in enticing clothing and sexy situations to finish them off.

The game overall is an entertaining romp, but having voice acting and animation in the sex scenes would have for sure made this better. And adding a bit more depth to the story. The gameplay can get repetitive, so I’ll make a case for adding variety as well. Overall I was happy with the experience and recommend you give it a try! Start playing Eros Fantasy.