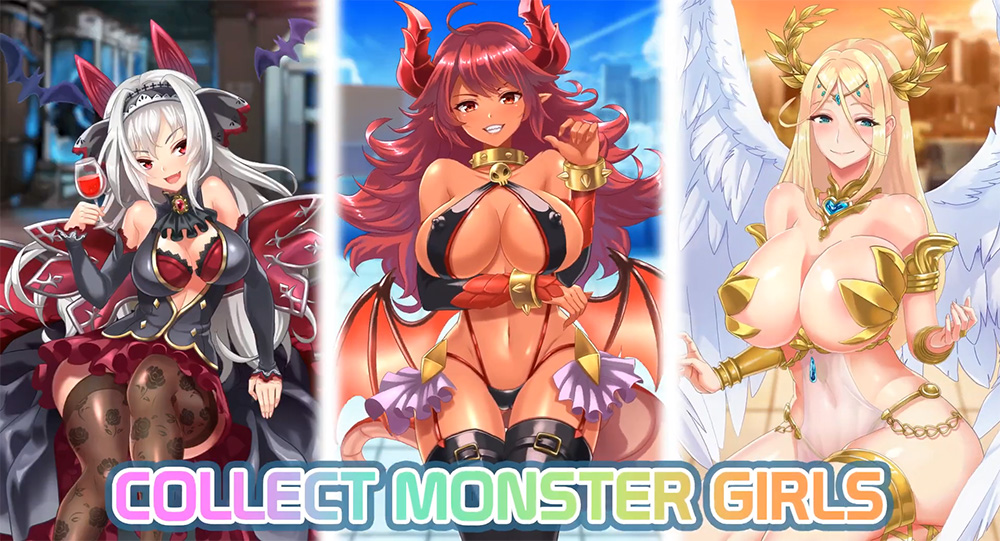 Before the events of the game, a top secret black hole experiment in the Arctic went awry. A gateway leading to a different dimension was opened. Strange monsters are now pouring to Earth, collectively referred to as ‘a space virus’, seeking to destroy humanity. Now it’s up to you to save humanity and contain the spread of the infection by using sexy women known as ‘Summons’.

The writing for Project QT is very limited. The game is primarily about battles and recruiting cute girls into your party. None of the girls are very developed as characters. After a while all of your Summons just feel like they have the same personality, with their sexy appearances being the only thing to differentiate them.

The game has average quality sound effects. Whenever you select something from the menu, you’ll hear one of several notifications ring. There are also abstract sounds that play throughout the game. During combat you will hear a lot of battle noises like thuds, blasts, explosions, swipes, slashes, chainsaw grinding and other magical sounds. The audio clips are professional quality.

The music in Project QT is good shit. The soundtrack rocks some juicy battle music and menu music. Menu music is slow and calming while battle music is fast-paced. The songs loop effortlessly, and are a little too short for my tastes. The songs feel limited but thankfully entertaining to listen to. After a while you don’t even notice the battle music because of how many other things you have to concentrate on. Song change overs are noticeable.

The menu music uses a combination of synthetic and original instruments. The keyboard is the most frequently heard instrument. The battle music employs drums and an electric guitar and keyboard to create a catchy rhythm that you can shake your head to.

Project QT is a JRPG and puzzle solving adventure game. You win the game by traveling to different points in the city and fighting hordes of monsters. During battle, you play a match-3 game, to charge up your party’s in-battle attacks. Each character has a different element that requires its own tile to be matched. The battle is turn-based but can be set to play automatically without player input.

You create a party of allies by Summoning new characters. You level them up by winning battles, and collect Fragment pieces which boost their abilities even more. You can also evolve your party by collecting certain items and meeting unique conditions. You can give your girls gifts and seduce them to unlock their kinky videos.

Each level has at least several stages that need to be cleared before you can move on. Expect to face a tough boss at the end of every level. There is a lot of grinding, so expect to redo several stages. Each battle has a certain number of challenges to overcome for bonus rewards. Some of these challenges include not healing yourself, utilizing combos, or winning the battle in a certain number of rounds.

The game has a ton of features. You have a bag where you carry around items you collect after winning battles. Project QT has an achievement list which you can use to earn more coins and stars to use in the store. The Arena is hard as fuck with super strong opponents designed to crush your spirits in one-on-one battles that are far worse than any in-game boss battle.

You can buy more girls inside the shop or wait for a special event to get one for free. You can spin the Wheel of Fortune for a chance to win one of a number of different prizes. There is a VIP room where you can get discounts on in-game items if you fork over the cash and become a member. The game is overall not reliant on in-game transactions.

Project QT has amazing graphics. The battles use chibi versions of the fighting girls, making the game look super cute. Each girl has just enough detail to be unique on her own with a different colour scheme, hair style, outfit, and more.

The backgrounds are limited. The map of the city that you navigate during stages and the Japanese school classroom where battles take place are the most frequently seen areas. The backdrops have deep detail with rich colour schemes. The lighting and shadows are beautifully realized. Character artwork in Project QT is three-dimensional. The sprites heave up and down and side to side, like they are moving. Proportions remain consistent with each girl competing to see who has the biggest rack and the sexiest smile. When you level up a character, they reveal more skin.

Project QT also features several fetishes. There are slime girls, cow girls, succubi, monster girls, and geeky girls. The more levels you clear, the more videos you can view. The 3D sprites move, their breasts bounce up and down. Their pussies get rammed by cocks. These scenes barely have dialogue with only one or two lines uttered by the characters. The game makes up for this with incredibly lewd moans every time you tap the screen.