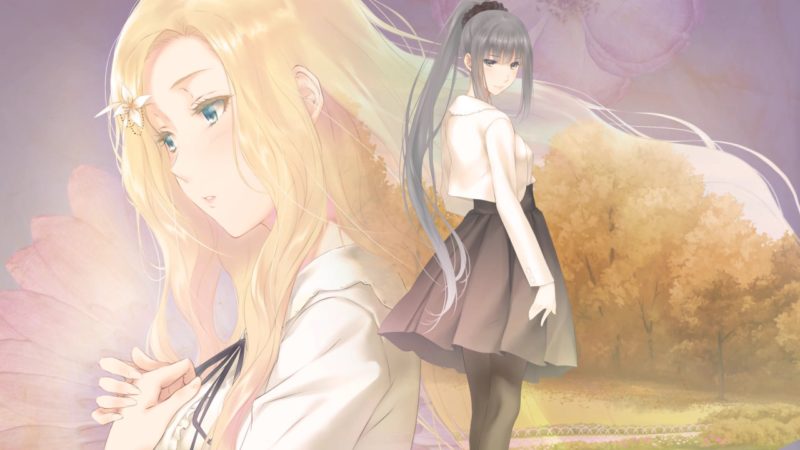 July 4, 2018 — Flowers -Le Volume sur Automne- is the third part of the Flowers series by Innocent Grey. The story picks up in Autumn, after the events of Flowers -Le Volume sur Ete-, focusing this time on Yuzuriha, the seemingly perfect girl who is trusted by all students at the academy; and Suoh comes closer to finding the answers on about disappearance of her friend. Kimi to Kanojo to Kanojo no Koi, is beautifully ethereal story from Nitroplus told through the artwork of Tsuji Santa, that follows the developing love triangle between three classmates. It’s packed full of humor, character depth, and multiple endings that will make you question the meaning of choice.

Togainu no Chi changed the landscape of BL titles forever. Now, thanks to JAST BLUE, English-speaking players can finally find out why. Nitroplus CHiRAL’s debut title has been enormously popular ever since its original release and is sure to draw in a new generation of devoted fans with its tale of desperation, loyalty, betrayal, and survival at any cost.

The hauntingly beautiful Lamento -BEYOND THE VOID- takes the popular anime trope of nekomimi – humans with catlike ears and tails – and uses it as a starting point for an incredible fantasy adventure of prophecy, evil, music, grief, and love. Few visual novels attempt anything close to the epic scope of Lamento, and even fewer accomplish it with the level of delicacy and richness found here.

JAST BLUE’s forthcoming first title, the cult hit sweet pool, will mark the first time that a Nitroplus CHiRAL title has been available to English-speaking audiences. JAST followed up on the announcements of last year with official release dates for two titles: Trample on Schatten!!, and Flowers -Le Volume sur Été-. Both of these titles will be available this month on July 16, with their physical package versions currently available for pre-order on jlist.com. Those attending AX2018 will be able to purchase early-release physical copies at the JAST USA booth. JAST also announced their partnership with Dual Tail on their upcoming English release of Venus Blood Frontier. This epic RPG title will be self-localized by the Dual Tail team with additional assistance from JAST on its translation quality and distribution. More information can be found on their Prefundia page.

And finally, JAST announced their new portal for visual novel developers and publishers to release their games onto the JAST store. Earlier this year regional pricing was added to jastusa.com to give international fans a more fair way to support VNs, then in May of this year JAST opened its store to 3rd-party VNs. They hope to create a storefront that can connect VN developers, both large and small, with their fans without the censorship and restrictions seen on other online stores.