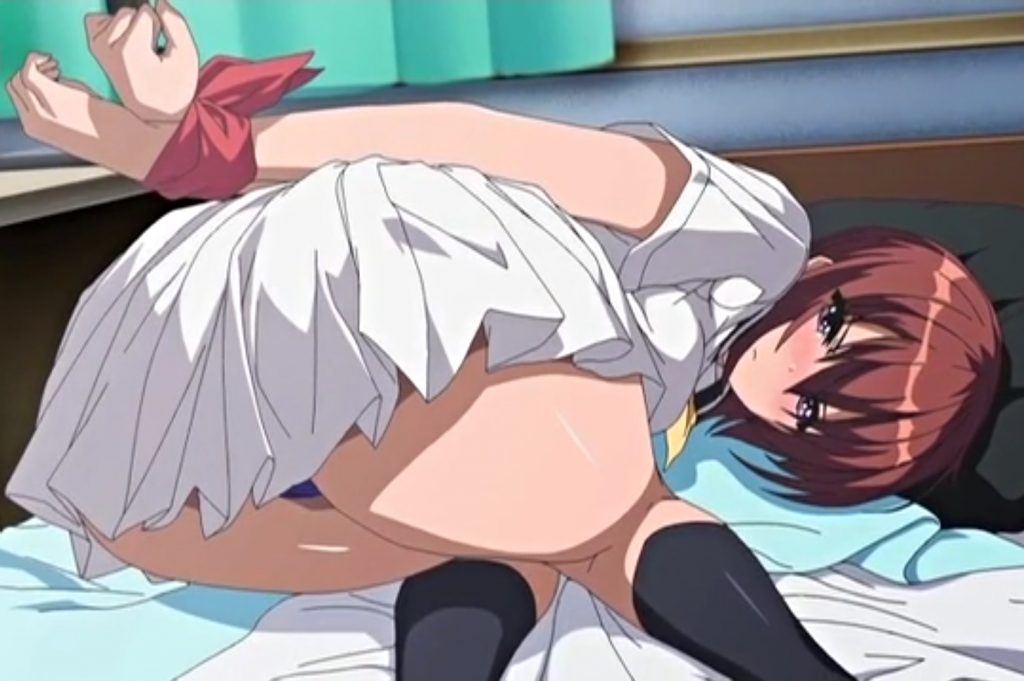 Several days later, Kioki cooks a meal for Hamoaka before he lures her into blindfold play. She goes underneath a work desk and sucks Hamoaka’s cock like a paid slut.

That night, Hamoaka finds Kioki in her room using a rope to pleasure herself. The scene is steamy as is, but Hamoaka levels up by binding Kioki with her swimsuit on.

This title is almost completely devoid of music. There’s a short jingle that plays during the title screen. The only vocals in the sex scenes are dialogue between characters. The series gets away with the lack of music because it adds to the sense of realism. I never noticed the music was absent.

There’s a particularly sexy shot of Hamoaka’s dick growing larger inside of Kioki’s pussy while they’re in danger of being caught. Kioki’s expression on her face afterwards is amazing.

The character designs are pretty basic, not very impressive. The backgrounds during animation are quite dull. Some scenes look duller than they should, but you’re not gonna pay attention with Kioki’s sensual presence distracting you.

In the first, Hamoaka plays the dominant, while the embarrassed Kioki is the sub.

Hamaoka and Kioki’s encounter in the school’s locker rooms is less sexy compared to the foreplay scenes. Seeing Kioki react with tsundere embarrassment at Hamoaka tying up her breasts and playing with her body is more arousing than the actual deed. Kioki’s lust-filled commentary throughout the events heightens the enjoyment.

There’s a moment where Hamoaka asks the fully bound Kioki to ‘insert it’ herself. That one got me. The scene is enhanced further by Kioki’s commentary and the camera which shows Kioki’s plush, youthful body from every possible angle.

If you’re a fan of S&M, I highly recommend this anime. The scenario is consensual but hardcore with great focus on the right things. I had a great time with this show.

You can watch this anime at several shady streaming sites. I recommend watching at Hentaistream, or Muchohentai.