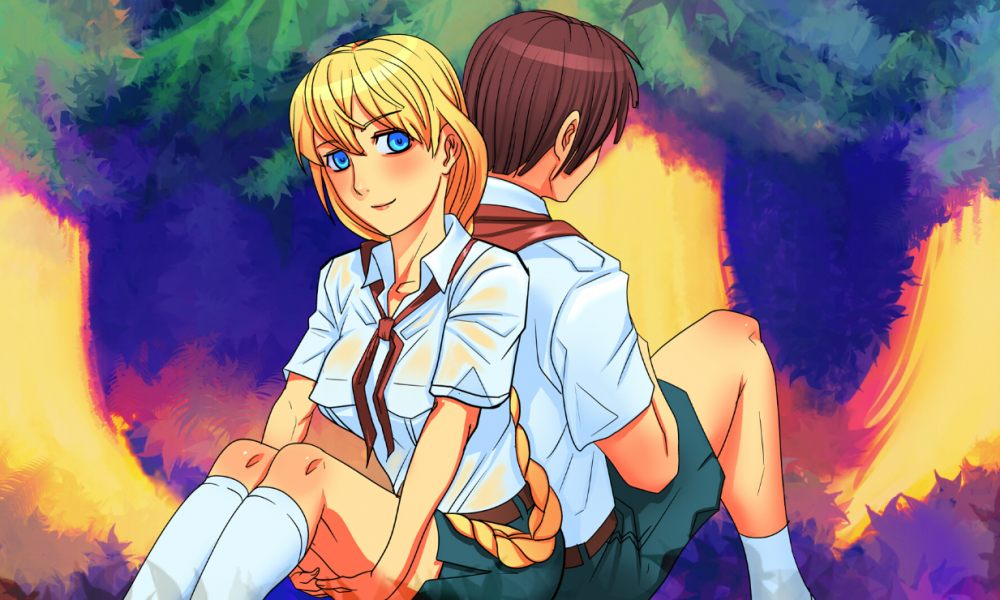 Written by PaleSnail, edited by Trapmaster.

Developed by Soviet Games, you can play this on Nutaku.net on your web browser.

Everlasting Summer is a personal tale of a reclusive Russian protagonist reminiscing over his life and failures. He gets transported back in time by a red bus into a communist youth camp. In other words, it’s a typical afternoon in modern Russia, right? The previous dreary winter scenes of a hollow city fade. The realm is replaced by the scorching rays of the sun, a secluded countryside, and an era in history that’s long gone. The camp seems to be otherwise normal (minus the whole communist and time traveling thing). Its inhabitants are outwardly friendly and seemingly oblivious, but this outward posterior leaves questions; ones you’d rather not ask, lest you break the fragile, pleasant illusion you are now stuck in.

You share most of the time in the camp with other young pioneers such as Ulyana (Bolshevik Pippi Longstocking), Slavya (a straight-edge blonde), Lena (a demure bookworm, and full on trash waifu bait), and Alisa (a tsundere who may or may not be part of the Red Guard). Other non-conspicuous characters are there to make the camp feel like it’s not actually trapped in a literal purgatory.

As the days go by, you and the pioneers partake in various camp activities. Surprisingly, these activities have nothing to do with the gulags or the execution of political dissidents. Your time at the summer camp consists of eating, hiking, dancing, swimming, playing cards, sports and other summer activities that bring back nostalgia of days gone by. From the serene sounds of nature, to the glistening afterglow of a rainy forest, to the bustle of a canteen, the sounds create their intended atmosphere perfectly. Even when the sounds are stock and the loops are easily noticeable, it doesn’t detract from the overall experience.

The story feels genuine, as if it were a personal one. Even if the events and feelings were pure conjecture of a writer pretending, they do hit a chord of true longing for purpose and dreams of a life worth living. Like in other stories contemplating the meaning of it all, the answer comes back to love and friendship. While that’s rather cliché, it’s still a message that doesn’t hurt to repeat. It isn’t presented like a cop-out either.

All choices have an effect in Everlasting Summer, with the most notable being the secretly tracked relationship scores that affect what endings you can unlock.  The first time can be played blind, as there are no true premature ”dead end” paths that require reloading. However, the choices and their ramifications are not always clear, which makes parts of the game’s multiple choices a matter of trial and error. You might need a walkthrough after the initial experience, if you want to complete Everlasting Summer. Due to the multiple branching paths, the plot itself is slightly fragmented. There are still certain story elements that stay the same regardless of your choices, so the game’s story manages to stay cohesive, even with its differing paths.

The writing describes emotions through the mechanisms of biology that try to wrestle control over the rational mind. Such naturalistic narrations are without high prose, yet they work in molding the surreality of the situation to feel more plausible and grounds the unreal world in a palpable, human reality. The dialogue is usually quite casual and flows naturally from scene to scene with minimal contrivance to its events. The story is quite existential, but it doesn’t become overtly metaphysical or navel gazing, despite the subject matter’s inherent philosophical implications. Everlasting Summer does not force itself in trying to make a concise moral statement. Instead, it’s more interested in creating a believable atmosphere in the moment to moment story telling. All of these aspects help in creating both a believable and surreal experience that keeps you invested.

The artwork is very nicely detailed, with vigorous colour and technique. You can tell that the character assets and backgrounds were done by different people, though. It can be distracting at times. In a way, the patchwork style of mismatching artists coming together tells a story of its own. A group of people got together to create a project they were obviously passionate about, regardless of budget or professional training.

What really sells the game though, is the expertly crafted horror and mystery story. It understands the importance of contrast and the slow corrosion of safety and trust that occasionally lulls you to let your guard down. When the creeping sense of unease hits, it hits hard.  The scares do not rely on the grotesque, cheap jump scares, or noise, but the narration, atmosphere, and buildup that is planned from beginning to end. It’s odd that such a classic understanding of a genre is lost on so many other supposed professionals. Anticipation in horror is key, and Everlasting Summer nails it here.

It would be easy to try and keep the reader engrossed with just flashy lights, violence, or sex right from the get go. However, the game is enough competent to trust the reader’s curiosity to wait for the payoff. Unlike many other visual novels of this nature, the voyeuristic pleasures are kept to a minimum. That’s unfortunate, because Everlasting Summer had a lot of potential in that aspect. Maybe indulging in complete smut all the way through would have cheapened the experience. Either way though, a Leninist summer camp full of horny teenagers without shameful, total debauchery simply isn’t quite as marketable.  Everlasting Summer’s mystery is left ambiguous, which does give it a timeless feel. This also lends itself to personal interpretation at the cost of a unified moral epiphany. For some, the lack of answers, ham-fisted political messages, and poignant allusions might make Everlasting Summer feel anti-climactic or devoid of true artistic merit. Then again, one might wonder how exactly the themes and events would be interpreted if it were given any extensive literary interpretation.

Everlasting Summer is like a fun summer vacation with communism, paranoia, and the constant fear of death. For a free browser based visual novel on Nutaku, it’s truly worth the time.