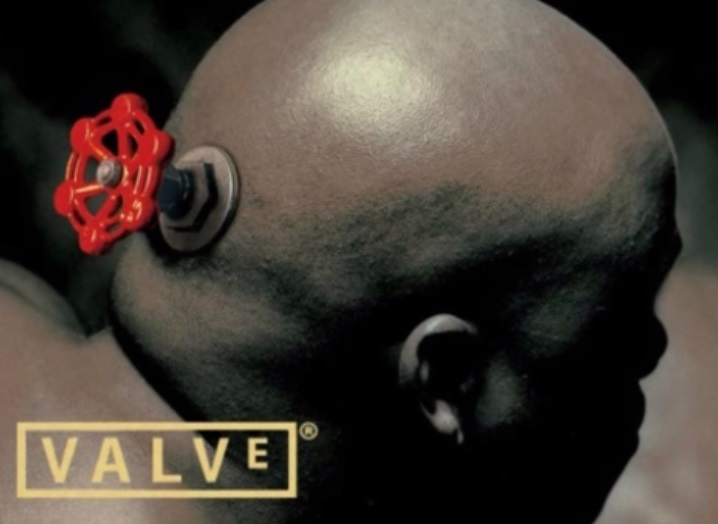 Before we dig into this article, I want to share my thoughts about workplace abuse. I worked for several sociopaths in the hentai industry before establishing my own business. To me, nothing about this news is shocking. The reality of every industry is that the people most motivated to climb the social hierarchy are manipulative pieces of shit who either had abusive parents, or something else traumatic happened to them. Experiences of abuse and rejection ignited a suicidal rage in them that drove them to work insane hours in the pursuit of excellence and power – that’s your manager. He has issues.

Never trust employers who give you promises. Your boss doesn’t care about you. Managers make decisions based on numbers, in service of their own self-interest. If you don’t want to get stuck in a relationship of financial reliance to some emotionally violent retard with mommy issues, your only option is to pursue financial independence.

I’m sick of people pinning these problems to vaguely defined concepts like capitalism. This is reality, this is detault human nature. If you want to avoid getting abused, your game is to take the money, connections, and experience from the hustlers, and build your own shop on the side.

Below is the unedited article from PCGamer, written by Tyler Wilde. Tweets by Rich Geldreich. 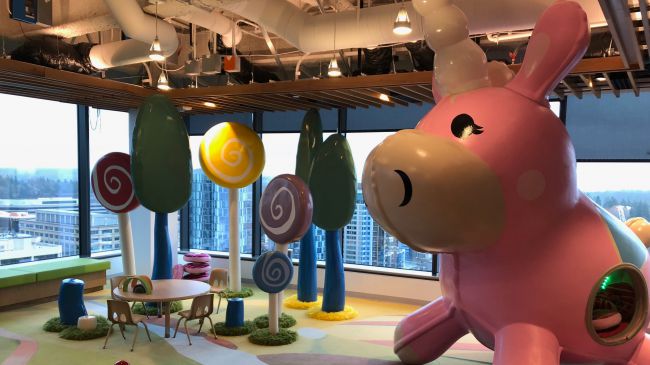 Former Valve employee Rich Geldreich, who worked at the company between 2009 and 2014, has spent the past several days tweeting detailed accounts of the internal politics at ‘self-organizing’ companies—one of which he says is based in Bellevue, Washington, where Valve is headquartered. Some of Geldreich’s comments could be about any self-organizing company (that is, a company without a traditional hierarchical management structure), but other, more specific references suggest he is largely talking about Valve. For instance, he comments on mass layoffs in 2013, and we know layoffs occurred at Valve that year.

While Geldreich says that he still prefers flat company structures to hierarchical structures (he’s now moved on to discussing the latter on his account), many of the politics he describes at ‘SelfOrganizingCo’ don’t sound pleasant. According to Geldreich, the company in question leaked its friendly employee handbook as a PR move, but was actually a stressful, difficult place to work, full of backstabbing and manipulation in pursuit of bonuses and job security. 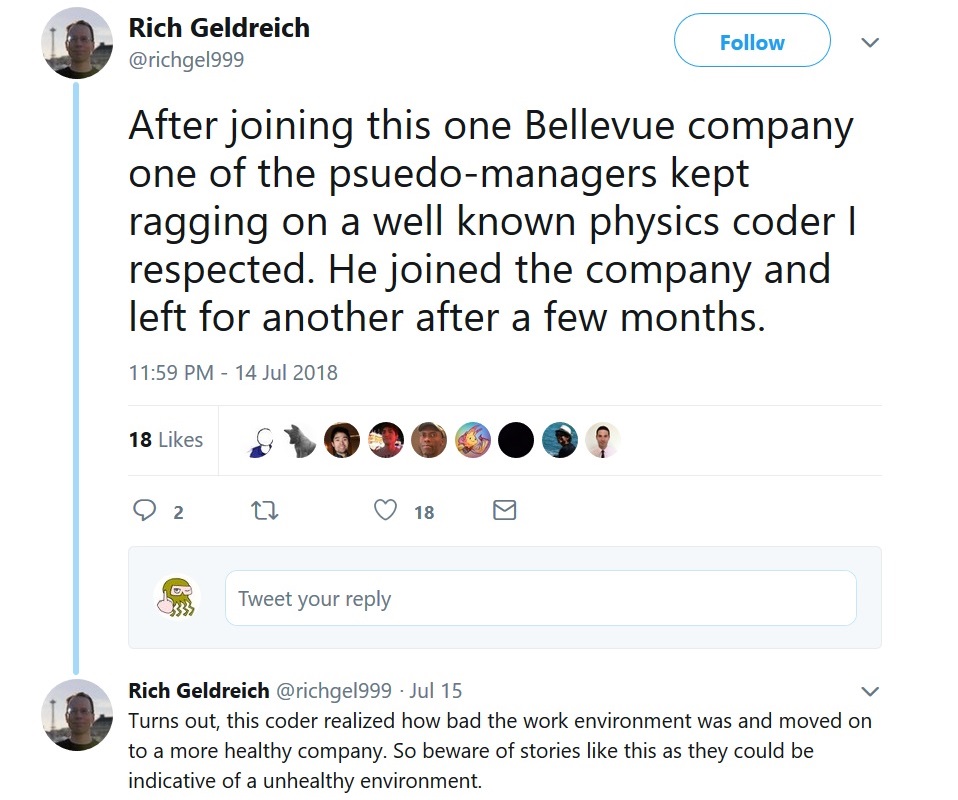 Here are a few excerpts from Geldreich’s long series of tweets, and what leads us to believe they are primarily about Valve:

“At a self-organizing company with bonuses: Once you modify a project you’re on the hook for anything until it ships. The team will hold your bonus hostage and claim your work broke something. It’s basically company-legalized extortion.”

(In 2013, former Valve economist Yanis Varoufakis explained that bonuses are a major part of Valve’s employee compensation: “The payment mechanism is to a very large extent bonus-based. So the contracts usually have a minimum pay segment in it, which is more or less established by tradition. And then the interesting part in this contract is how much is left to the peer review process, which is very complicated. It involves various layers of mutual assessment.”)

“The company was moving into a new field. They made the temp strategic hire then fired her a year later with no warning after they had hired up her friends and their friends.”

(During Geldreich’s time at Valve, the company axed its augmented reality development, firing developer Jeri Ellsworth along with others, though he may be referring to someone else.)

“Another type of temp strategic hire you can make is to recruit a well-known author, a famous dev, or a person with specialized skills (like an economist). Have them write gushingly about their amazing experiences at the company. Once you’re done with them quietly let them go.”

(This seems to be a reference to economist Yanis Varoufakis, who is quoted above regarding bonuses, and who did write blog posts for Valve. In 2015, Varoufakis was appointed Greek Minister of Finance.)

“All legit self-organizing firms have to ‘leak’ an official unofficial Company Manual. It’s got to be slickly made and fun to read. Developer Marketing gurus create these productions to sway new recruits into the Hiring Funnel. Insiders laugh at these things.”

(Valve’s employee handbook was leaked in 2012, which was during Geldreich’s time at the company.)

Some of Geldreich’s comments are similar to comments Ellsworth made after being let go by Valve. “…There is actually a hidden layer of powerful management structure in the company and it felt a lot like high school,” Ellsworth said in 2013. “There are popular kids that have acquired power in the company, then there’s the trouble makers, and everyone in between.”

Geldreich similarly describes ‘barons’ who are in with the executive arm of the company in question, and a culture in which employees must curry favor with influential ‘sponsors’ to enjoy stability. 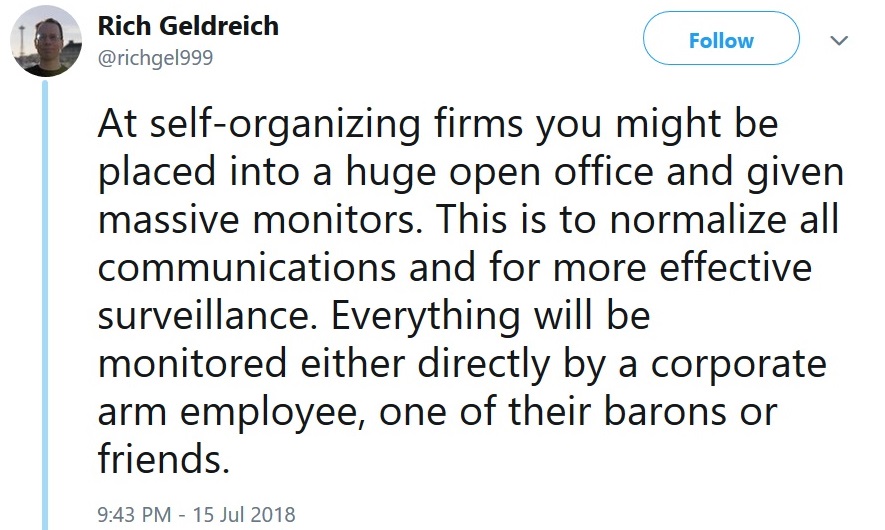 While Valve has some glowing recommendations on the anonymous employee review site Glassdoor, the testimonies of certain self-proclaimed ex-employees also mirror Geldreich and Ellsworth’s comments. One Glassdoor reviewer calls Valve’s employee review process a “popularity contest,” and another says that the “opaque approach to compensation and retention breeds a culture of paranoia,” despite leaving an overall positive review.

“If you buy [Valve’s] rhetoric, you’ll hear that there are no bosses, no managers, no supervisors and that there is a flat structure where everybody is so smart, so cool and so intelligent that they can work completely autonomously,” reads an especially negative Glassdoor review. “That is only a facade … In order to succeed at Valve, you need to belong to the group that has more decisional power and, even when you succeed temporarily, be certain that you have an expiration date. No matter how hard you work, no matter how original and productive you are, if your bosses and the people who count don’t like you, you will be fired soon or you will be managed out.”

This account sounds similar to the “purging” described by Geldreich’s tweets, as well as his claim that the lack of structure is illusory, and that company politics are actually influenced by executives and their baron confidants. 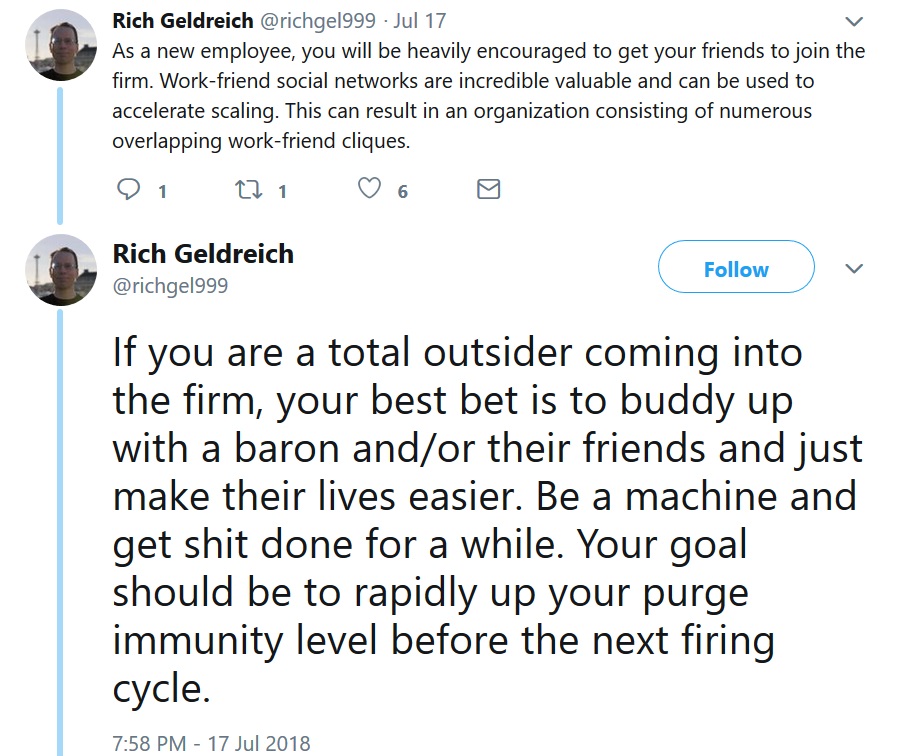 Valve has a reputation for being a mysterious company, where creativity and people flow between projects without restriction, and the CEO happily responds to fan emails while still maintaining an elusive and capricious persona. That mythical quality makes it difficult to get a clear picture of what it’s like to work at Valve, which of course only fuels curiosity, making Geldreich’s comments stand out.

Many have had positive experiences at Valve, or have at least said as much, and that is also reflected on Glassdoor and in other accounts of working at the company. In 2012, Michael Abrash praised the transparency and freedom he experienced at Valve, saying that the lack of hierarchy produces “remarkable results, things that would never have seen the light of day under normal hierarchical management.” (Abrash left Valve to join Oculus in 2014.)

Criticism we’ve seen from ex-employees, however, suggests that while Valve works for the in-group it can be alienating and anxiety-inducing for others. Multiple ex-employees have now said that Valve’s non-hierarchical structure is not what the company says it is, and that projects and people are subject to power dynamics and executive decisions just as they are in any other workplace. 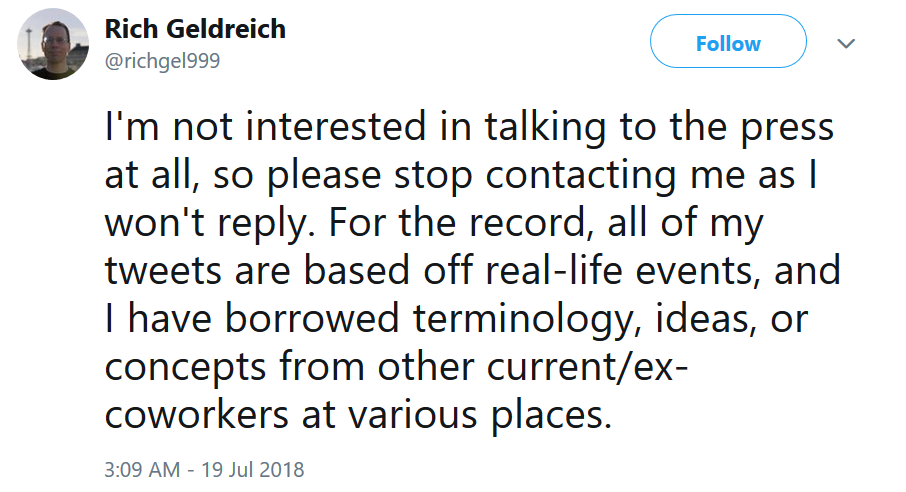 I contacted Geldreich earlier this week in an attempt to clarify his experiences at Valve, but he has not responded. On Thursday, he tweeted that he will not speak to press, and that his comments are about “various places.”

On why he’s chosen now to reveal these abuses in the games industry, Geldreich says that “nobody apparently else has the balls, the principles, or the means to push back” and in various ways accuses the press of being pawns of corporations. As for why he does not name Valve directly, Geldreich tells one person that he did not use “the V word” specifically to avoid press. He has criticized Valve by name in the past, however, calling his time there the “worst experience” of his life.

Geldreich’s tweets cover many other unsavory practices at ‘self-organizing companies,’ all of which are unnamed. For instance, he says that at a certain company, the “president/CEO” held a meeting to talk about “how he manipulated the press.” He also accuses the industry of “illegal wage collusion” and blacklisting. You can read his tweets in full on his public Twitter account.