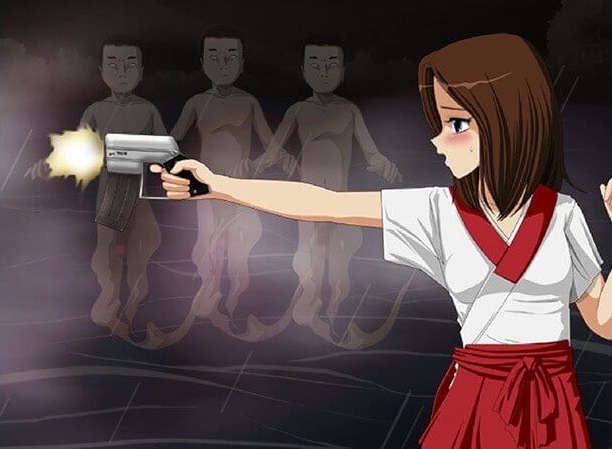 From the makers of Shinobi Buster Mizuna, Ghost Town Gunsweeper is an adventure game that follows a team of ghostbusters! Hoping to find the soul of the GEC director, these ladies will have many sexual encounters on their journey through the ruins.

A team of four ghost hunters are exploring an abandoned ghost town. They’re searching for the soul of their boss, the GEC director. They’ll have to collect lots of semen to defeat the enemies ahead! There’s no time to delay, for the GEC director’s soul will be gone forever if they fail. The ghost hunters battle grim reapers in a grand quest to resolve the mystery while having buckets of casual sex along the way.

This game can go from silly to serious in a matter of seconds. One moment, a ghost stamps you with a label that says you’re worth $1. The next moment, you’re fighting Satan and lose your soul to him.

The story of Ghost Town Gunsweeper about tracking down the source of the ghosts and battling Satan. There’s nothing incredible about the plot, but the dialogue is where the story shines! Each character is full of personality, from the humble shrine maiden to the pervy nerd guy. The unique interactions are a joy to watch.

The only real issue is that the story segments are badly paced. For example, after you resolve the issue of the super-market ghost, you’ll play the next hour without reading a line of dialogue!

Moyoko is the school girl newcomer to the Ghost Hunter task force. She’s insecure with herself, but always willing to fight for her friends! Her personality is balanced, she’s neither a complete introvert nor an extrovert. Moyoko’s mother and father are key characters in the main story.

Rei is the sexy blonde of the group. She’s a veteran ghost hunter who dominates in conversations. She was the hero of the previous game in this series. She’s a fierce extrovert and most comfortable at collecting semen.

Tomomi is the temple maiden and healer of the party. She’s very introverted, and hates the semen collection part of her job. She worked alongside Rei in the previous game. She sells charms to Moyoko that can repel, or attract ghosts. She is the sister of Eiichi.

Eiichi is the beta male pervert of the party. He handles item crafting and maintains the equipment. His character is most often used for comic relief like when he gets slapped in the face by a random ghost. Even though Tomomi is his sister, he still fantasizes about her and the other girls all the time!

Ghost Town Gunsweeper was created with RPG Maker. You move with the arrow keys and press spacebar to interact with objects and people.

The gameplay is almost pure exploration. You search buildings for items and fight enemies for valuable semen. The shopkeeper and crafting person are party members, so there’s no need to visit a friendly NPC town for your town action. The entire game takes place in the ghost town. There are no friendly villagers.

You can choose your character in the beginning. The choice only effects dialogue. The differences in the story are important enough to justify at least a second play-through.

The girls’ clothing is damaged in combat, and repaired by speaking to Eiichi. The damage is reflected visually in the character sprites, and will change their expressions and dialogue.

The combat is turn-based. Despite being an RPG Maker title, the experience is unique. You only have a set amount of bullets to use for attacks. You have to reload at the end of your clip. You can jerk off ghosts in the middle of a battle to collect their semen. There is no status menu, so you’ll never know how far the next level-up is.

In the pause menu, customize your battle commands to use new techniques in combat. Keep an eye on your quick-select abilities. The priestess for example has a fantastic healing spell that you’ll definitely want to use frequently! You need to collect ‘Maca seeds’ to extract more sperm from your opponents. These seeds can be found by interacting with drawers and kitchen sets. More buildings and areas become available when you acquire a shotgun. Shoot through crates and other barriers.

The game can be hard to learn, but everything becomes intuitive after the first couple battles. By the end of the game, you’ll have fully mastered the combat system.

The art is traditional Japanese anime style, similar to many 90s cartoons. The main girls have a significant amount of art devoted to their luscious feminine bodies. Their in-game pixel sprites are beautifully crafted to look just like their character art.

The game has a small world map, with at least 50 different interiors to explore. Most houses are empty, but many have loot and a unique interior design for players looking to immerse themselves in a ghostly experience.

Many of the events in this game have matching animations that bring the characters to life. In the opening sequence, fierce wind blows on their hairs as Moyoko looks through her iron sights and fires her gun. The numerous images and animations are rigid but gorgeous, and make this indie game an engaging experience.

The visuals are full of personality. Enemy attacks are hilarious, with great attention to the script. For example, your undead enemies will pelt you with clumps of smegma, which debuffs your girls.

Almost every aspect of the visual presentation in this game is executed seamlessly. For example, you can go up the stairs of an apartment complex to explore different floors, all without the screen ever fading to black! It’s cohesive and seamless. It’s impressive work by the developers.

The sound effects are unique recordings that fit perfectly with the visual presentation. You can hear the awkward sound of an inexperienced girl clumsily groping a penis. You hear the sound of your bullets as they penetrate your foes. The audio is realistic and does not use any standard RPG Maker assets. It stands apart as great sound design, without ever being repetitive.

There are 75 songs on the soundtrack. The majority of them are never used.

Most songs are short loops, less than one minute long. You hear instruments like the electric guitar, and woodwind piccolos. The songs will get repetitive fast if you actually stop to listen to them. When you battle grim reapers for example, the background music is a 28 second loop. It’s far too short and repetitive. The piccolos and other instruments used in more atmospheric pieces sound great, but even they get repetitive.

Ghost Town Gunsweeper has nearly 30 sex scenes in total, ranging from standard handjobs to ghostly gangbangs. Most scenes have at least 3 variations with different dialog.

The recollection room lists 19 sex scenes in total, but there are 30 in truth, because each girl has her own unique variation on a scene. For example, each girl has a unique scene and animation when penetrated by the enemy ‘ghostly custodian’. Even though the sex partner is the same, the scene is different.

The dialogue during sex scenes is short and to the point. You read only a few lines in between the animated fucking. Fetishes range from non-consensual to yuri and futa. There’s a bit of everything for everyone.