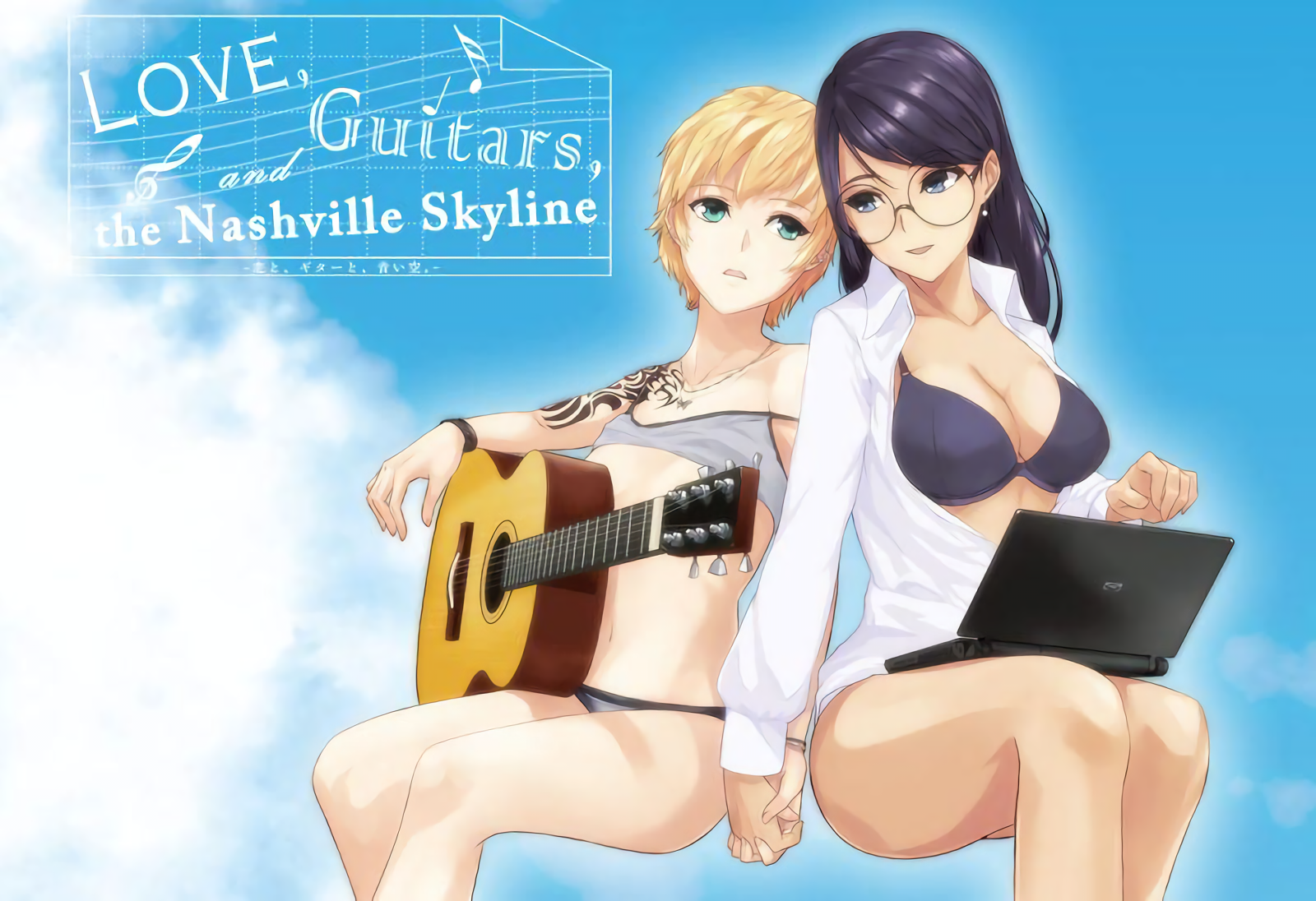 Amanda is a workaholic. She’s also a closet lesbian, and hails from a town that isn’t quite as accepting of gay folk as she’d like. She’s responsible and mature, if a bit stuffy.

Love, Guitars, and The Nashville Skyline, is a visual novel developed by Cosmillica. programmed in Ren’Py. Released in 2017, published by Denpasoft. Compatible with Windows and Linux operating systems. The game is available for download at Nutaku.net.

Amanda is told to take a vacation by her boss. She hears a country song on the radio and immediately chooses to go the Nashville, and while there she catches Juliet playing in a bar. Juliet is a rambunctious, free-spirited musician, who’s traveled state to state with nothing but her guitar. Coincidentally, she’s also a lesbian, and her family also seems to have less than ideal views on homosexuality.

Amanda gets blackout drunk, and wakes up the next morning apparently having fucked Juliet hard. In fact, she fucked her so hard, that the young rock star fell in love with her. Amanda, of course, remembers none of this, and she also doesn’t remember wasting her money away and destroying her cellphone. She is stranded in Nashville. Totally fucked. 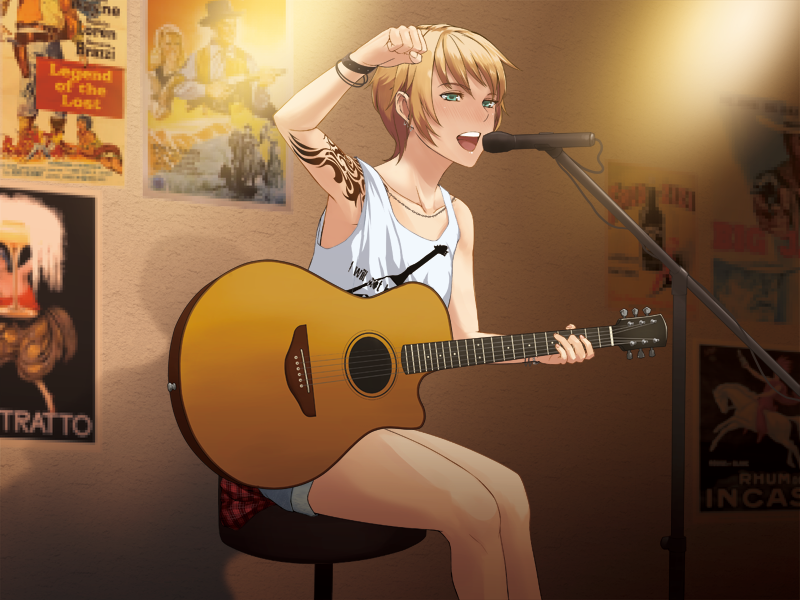 Not all is lost, though, because Juliet is there. Despite being about a decade younger, she has the street skills Amanda lacks, and quickly takes the lead as they hitchhike their way back to Amanda’s home in New York. Juliet finds local venues to play her music at along the way, making enough money for food and a motel room, and the two spend their time taking in the sights and enjoying each other’s company. They bond primarily over being lesbians, and how their respective families don’t really dig that.

If it wasn’t apparent already, this is a game about lesbians being lesbians. Most of the dialogue between Juliet and Amanda that isn’t about their broken home lives, is about their lesbianism. The characters they run into along the way include a lesbian used car dealer, who has a lesbian wife in the military, and Juliet’s younger sister, who brings forth the climax of the story because she isn’t a lesbian.

However, more important than all that is Juliet and Amanda boning.

They bone almost every night, apparently. For a game this cheap in price, these are some surprisingly tasty yuri h-scenes.

The art has some crisp lines. The shading is decent, despite a few splotchy parts, and most importantly, the anatomy is pretty damn realistic. The backgrounds are not so impressive. Like many other visual novels, LGN has photographic backgrounds edited with filters. It’s fine, except that they seem to have used stock photos. As such, there are brand names in them, and because they can’t show logos, there’s an awkward mosaic censorship in some of the backgrounds. 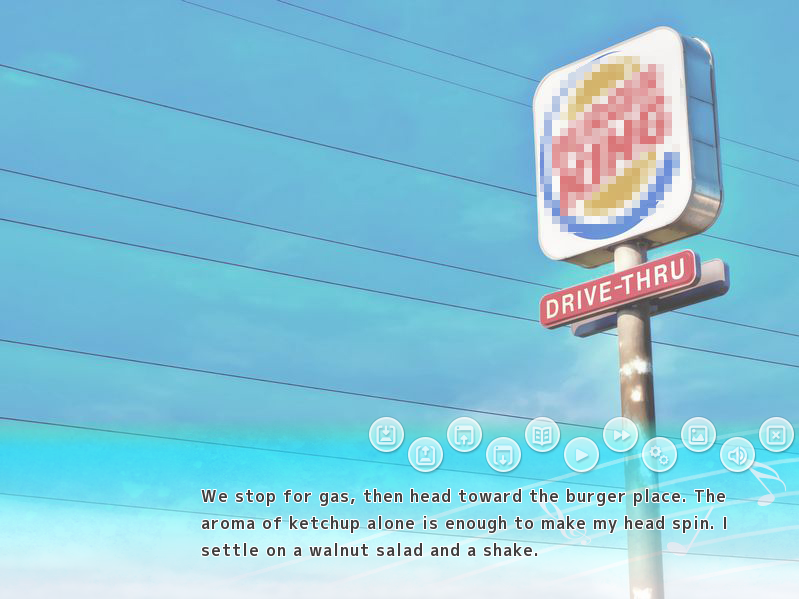 The censored backgrounds threw me off at first, but they weren’t the only thing. For instance, Amanda is Hispanic. There’s also side plots about how cops are bastards, and scenes with Amanda being catcalled. All of these, combined with the American-anime artstyle, Ren’Py, and the fact that it takes place in the States, made me think it was an American game.

No, this game is Japanese, but I was convinced otherwise until I heard the voice acting. The game is fully voiced, and voiced well, with the actresses’ voices matching the personalities of the characters, but it’s still odd to hear names of famous American landmarks uttered in Japanese.

The music is pretty meh. It’s some generic rock and country shit, almost certainly thrown together like all the other shitty visual novel music, with nothing terribly exciting going on. If you do happen to like it, you can play songs in the menu, and view the CGs. 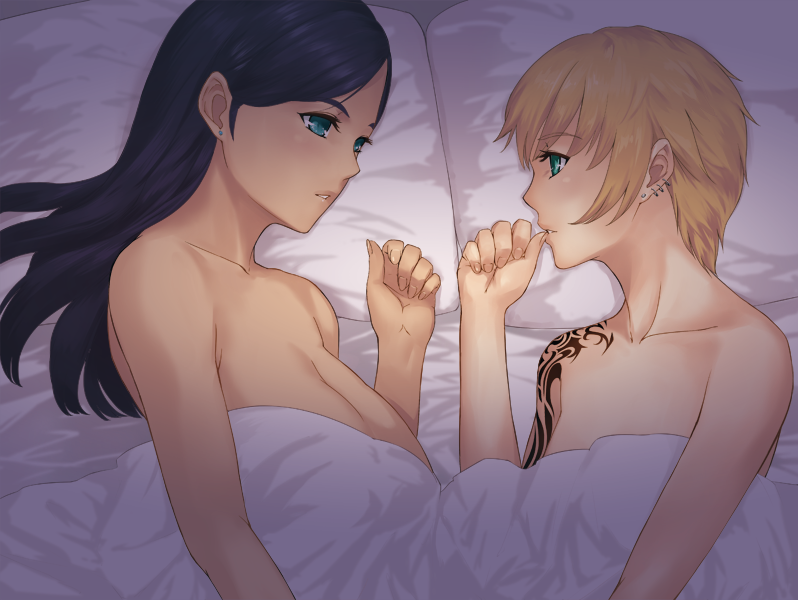 So what do I actually think of Love, Guitars and the Nashville Skyline? Well, besides hating the lack of an Oxford comma in the title, I like the game an awful lot. It’s short and sweet and not bloated with unnecessary plot points or anything. Being a kinetic novel, it’s pretty much a one-time deal without much replay value, and the ending isn’t the greatest. It’s semi-predictable if you’ve got half a brain. However, playing the game through can be a lot of fun because of the characters. It’ll be a mixed bag for some people, but in my case it was worth.