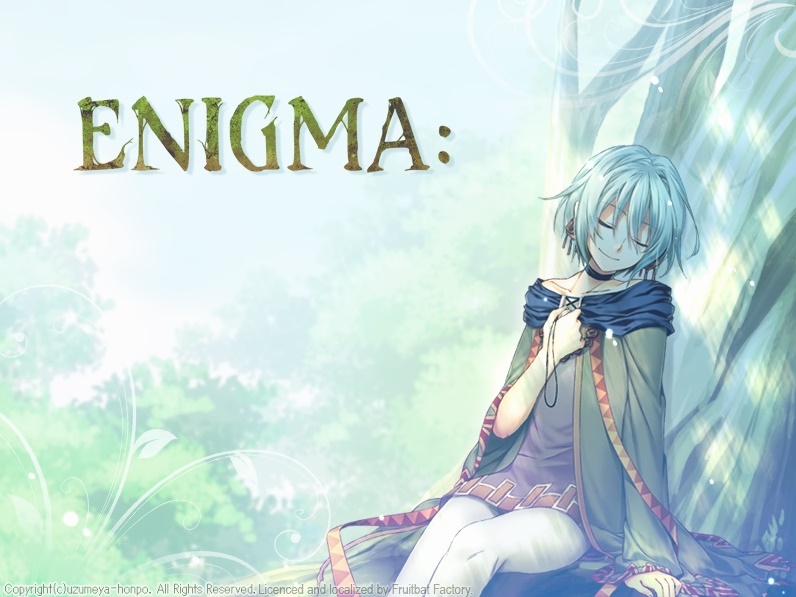 Fruitbat Factory released a new title under developer Uzumeya on November 15th of 2016. Localized by Fruitbat Factory, sold at Mangagamer, who usually only publish pornographic Japanese games. On occasion they make an exception, as seems to be the case with this title. Enigma has no sex scenes or any real lewdness aside from what is implied. Instead, Enigma is triggering, heavy on story, and a real heart mover.

I didn’t think much when picking up the visual novel Enigma. I figured it would be the typical love story built around a random quirky trope. I soon discovered Enigma had much in store for me. Firstly, you have to discover the five main endings before the game allows you to even continue on to other routes. I had to discover these routes, which took up much time. I couldn’t even cheat by googling this information, since this is a fresh release, that very few have played. I actually had to test out each combination of choices, to access the full story. Once that was done, the introductory cutscene changed and I was able to gather hints for how to start on a recently unlocked route. Once I got that route, I had to complete that the correct way to unlock the next. After plowing through these, I finally reached the true ending of the story.

Chester came from the mainland of Lysnia to the small island of Carlyle after his boat crashed. He is dying, and left his home due to complications with his condition. He did not want to stick at home dying, having never explored the vast world outside. Ironically, there is not one route where he doesn’t die. There’s nothing you can do to change his fate despite how much he may grow on you. Chester’s insides are slowly rotting away due to a strange disease called Enigma. However, Chester is not depressed about this. He has completely accepted his fate and tries to make life easier for others even though he’ll occasionally cough up blood and pass out.

A young woman named Colette and her younger brother Lauro find Chester washed up on the shores of their island. Colette seems like a fine cute girl at first but… Well, you’ll get to see why she has no happy endings. Her brother is a gay carpenter. That’s not an innuendo either. He protects his sister from a man named Tai who fits the role of the idiot everyone hates. Tai wants to have Colette as his wife and will not take “NO” for an answer, even when it’s spelled out for him.

There are three characters that don’t really seem to have any reason to be included in the story. Every time they appeared it seemed like just a waste of time. There were no branching choices you could make involving anything they said or did. These characters were a middle-aged man named Genius, a well-endowed widow named Lyona, and another gay teenager named Zezae. They only added a tinge of emotion to some scenes, like when one of them revealed something shocking. But the feeling didn’t stick with me, like it did with the characters who have big impacts on the story.

The self-proclaimed village “doctor” with herbs, Greta, is a child with almost the mentality of an adult. Later in the story you learn why she hasn’t aged in years. She gives Chester advice, but she doesn’t do much, even in her own route. It honestly felt like that route was dedicated to explaining the history that’s left out in other routes. You know, to add a sense of mystery, to encourage you to continue playing and discovering why something happened the way it did. Anyway, Greta has an apprentice named Ignis who lives in the infamous white forest.

Ignis is very anti-social, as you’d expect from someone living by himself in the forest. His character really was this game’s turnaround point. As soon as you meet him, the story gets mysterious. Ignis is a white-haired near-mute character. His route really brings to light a lot of the rumors about the townsfolk involved with creepy life-stealing dolls. I won’t spoil his origins or his backstory, but he creates dolls for Enigma. Envirio, the mysterious blue-haired girl featured in much of the game’s art, is directly related to Ignis, making her quite an important character. Envirio is also the game’s final route and possesses the true ending. She desires to help the forest and Enigma regain their “color”. I won’t spoil the good parts of the story. That’s your enigma to unravel.

The three main routes in this game are with Lauro, Ignis, and Envirio. I mentioned before that you have to go through five different endings in order to actually progress. Well, all five of these endings are almost the same, with you and Lauro being all buddy-buddy up until the end. Don’t worry though, it actually goes somewhere eventually. Once you complete those five endings, you have more options on the same story choices you had before. Certain combinations of choices set you down a certain character’s route. You replay the same scenes, with the help of the fast-forward feature, to access the new scenes. This really gets you used to all the characters. When you finally get to progress, it doesn’t feel like you didn’t know enough about those who you suddenly leave behind.

I’m not sure why they decided to completely do away with opportunities to have more happy endings with the other more interesting characters… Take Greta for example. A cute girl trapped as a young girl until she is released from her role as “The Bride of Enigma”. Her supposed route was an explanation of why things happen a certain way, and what she should do in the future. Not much else happened in the route, except you building up trust with her. I think that there could have been more interesting scenes with Greta than just her talking while picking herbs.

There’s a lot of great characters in this title, but Colette for example, seems to be just a contrived crazy bitch for no real reason at all. I was very disappointed with how they handled her. It’s implied that Enigma possesses her randomly… RANDOMLY. She’s basically just this bullshit character that ends routes when the player makes the wrong choices. In one route, she actually murders you.

I don’t mind spoiling Collette, because I hated her. Everybody else was more interesting than her. It was really weak, how the routes where you happened to get too close to Colette, just ended on a brick wall. Why include a character as a seemingly sweet love interest, but make her not available in that way? Even if you go down the route to get Chester with her, and you choose to stay with her, she goes crazy when Chester dies. Should you choose to fuck away from her, she refuses to believe your sickness is real and kidnaps you… and then few days later, you are dead, and she’s weeping on your corpse, going mentally insane from the sad.

Collette is one crazy bitch I wouldn’t want to stick my dick in.

The music was very gentle in this title. It really made me feel like I’m on a strange island. There were light tunes that captured the essence of being in the jungle, and there were light tunes relaxing at the beach. Even during tense moments where you aren’t sure if you’ve chosen incorrectly in your route, the fight music is still got an air of calmness about it. Much like how Chester views his own disease, with a sense of tranquility and acceptance. Very creepy gentle music plays during the scenes where you guide Chester into a bad end, so you won’t have to worry about cranking down your volume for unexpectedly loud music. But, you might want to adjust the sound effect volume scale. They’re seemingly not optimized it correctly. I shat myself when two characters were playing in the water, trying to catch a fish, because of how loud the splashes were.

Sadly, Enigma is not voice acted. If only it was, then I could have burned Envirio’s voice into my brain. She’s a tough one to describe without explaining the entire story. She’s a mysterious girl with a deadly intention since she is directly related to Enigma. She doesn’t seem to know much about anything besides this strange “color” she speaks of and helping Enigma regain it. That’s all I’ll say about that young beauty, just to keep the suspense of learning about her yourself. Envirio is best girl.

I think this visual novel was very detailed and serious with its art style. There  are no mile wide gaps between characters’ eyes like in the Winged Cloud Sakura series. The sprites had individually drawn faces for different emotions. For example, when a character says “…!” it means that they’re shocked about something and every character has their own shocked expression to go along with this. I liked it a lot. That sort of attention to detail is something that some visual novels don’t seem to really care about. There’s also some cutesy shit like a couple scenes with chibi style characters. The art style really brings out just how dark this game gets with its bad endings. It captures that balance between creepy and edgy very well. However, the game is locked at 4:3 and the best resolution to play it is 800px by 600px, so it’s really pixelated when blown up on full screen.

Enigma’s title describes its content. A lot of things are a mystery that you love to unravel. In this review, I skimmed over most plot points on surface level, so that you can experience this puzzle of a game for yourself. The fun is trying to figure out what’s really going on. So, if you enjoy a good mystery story and quirky characters, Enigma is for you. Download this game on Mangagamer.com.