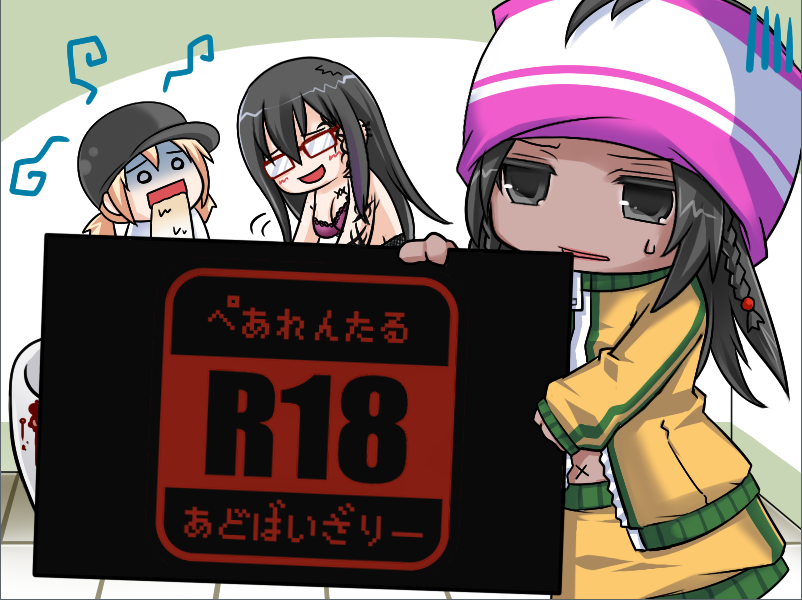 Made by studio Cosmillica, this PC kinetic novel is satirical, packed with crazy dialogue, violence, and the story told in a non-linear narrative. Now, say what you will about game descriptions being misleading as shit, but the one for this game is spot on.

ATOM GRRRL!! has a story so non-linear you’d swear it’s one of Tarantino’s wet dreams, but lucky for you this review isn’t. Jessica L. Hustler is a flat-chested American back on the West Coast after being stuck out in Yamato thanks to the head of the Hustler family, her gramps. For an old guy the family head is a very, very influential person with the right connections, and knows how to get shit done. That’s one of the reasons he won’t pick just anyone to be his successor, and that is his reason for sending Jessica overseas (an odd requirement to be his successor if you ask me). While she was gone her BFF Anna ran their gang, “The 99th Floor”, which has grown in both members and reputation.

Unfortunately for Jessica not everyone agrees with ol’ gramps, especially her brilliantly named cousin Very. Determined to show that she’s a better person to choose than Jessica, Very becomes successful in the two areas of business the Hustler family stays out of – drug dealing and gambling. She even takes out a hefty loan in order to open up a casino as a means of earning even more money, despite her father Vince telling her just how bad things will be if shit hits the fan.

Unfortunately for everyone, shit does hit the fan, and real fast too!

Big E, Jessica’s old female business partner, calls for a visit as soon as she grows aware of her return. Next to the Hustler family, Big E is a big-time mafia boss with a big reputation. The only thing Big E. has that’s got a bigger reputation is her craziness. She has no issue going to every possible extreme against anyone that tries to cross her. So you can imagine how she feels after finding out that a member of the Hustler family sets up a casino in her turf behind her back. Not wanting a war to start out between the family and Big E, Jessica agrees to deal with the situation before Big E decides to massacre some bitches.

If you’re a fan of branching storylines, ATOM GRRRL!! doesn’t have one. You’re simply here to enjoy the ride and watch the events unfold. Because the events are given to you out of order, it’ll take a second to understand when things happen. This is easier, and makes more sense, once the plot starts heading towards the climax. The game does feature an opening movie, which was a surprise to me since the few VN’s that I’ve played never had that. At the same time, if you’re like my you’ll easily skip the movie with how anal Renpy is. Press a single key on your keyboard, any key at all, and it’ll take that as a cue to skip the movie. Thankfully you can catch that and the closing credits in the Addition section of the main menu.

ATOM GRRRL!! features a varied voice cast, something that’s found in a lot of movies done by Tarantino. Shinna Amane voicing the role of Big E was well done, and it was unfortunate that many of the other voice actors haven’t had a single credited role in another work. Their performances were great and this game will hopefully boost their careers. Unfortunately not every scene has great voice acting. Certain scenes have less emotion expressed than what the scene demands, such as speaking in a calm voice when you’d expect some anger or yelling behind what’s being said. For me those instances really killed what probably would have been an enjoyable scene.

The characters themselves are unique in their own way. Very is the opposite of her cousin Jessica in about every way – they both yield from two different cultures too, America and Japan. Where Jessica is more reluctant to have the processed and artificial delights that make America what it is, Very doesn’t give a fuck and likes to indulge her sweet tooth. The fact that Very goes against the rules set by the Hustler family and gets into drugs and gambling help with the American stereotype. After all, this country was founded by thieves and killers.

Anna has a scene where you’d swear she’s giving some sort of sermon, something that seems to happen a lot whenever there’s a black woman around. She’s also the more mature one when compared to Jessica, which can’t really be helped considering Jessica looks like a total brat. Their relationship is one you could probably call cute – two friends who were there for each other until one had to move away for a few years. They are now back together as friends and fuck buds.

Big E though, she’s the crazy bitch you’d probably like to have as a friend. Or not. Jessica helps Big E out in a big way and still has to deal with making sure she doesn’t get shot for saying the wrong thing. Impulsive as fuck and unpredictable as hell, Big E. is someone that wouldn’t think twice about cutting off your dick and shoving it up your ass so far you’ll have to shit from your belly button. And she would do that just because the sky is blue that day. I would dare say she has the most entertaining dialogue between all the characters in ATOM GRRRL!!, and every scene that involves her usually has some sort of bad news to accompany it.

The choice of music used in the game’s opening and closing (as well as the voice-over in the menu) have a good helping of Engrish, but it fits the game. The scenes have music that goes along with what’s going on. Unfortunately there is one sound in particular that gets annoying if you don’t get through the scene fast enough, and that’s the effect for whenever someone starts shooting. It’s loud and sounds more like some laser than a gun going off, especially in a scene where there’s a lot of people supposed to be shooting. Thankfully you always have access to the game’s options menu, so you can adjust the volume of not just the characters, but that annoying sound effect as well.

That’s cool and all, but can you fap to it?

Now for the most important part, which also happens to be what ATOM GRRRL!! lacks the most. While the voice acting and artwork for the fuck scenes are mostly good, the quantity is disappointing. You can easily count the number of fap scenes on one hand, and dialogue in two will kill the mood for some. I suppose you could call those specific scenes “cute” considering the two involved don’t really know shit about lovemaking. Ultimately I’d consider the scenes something you’d use for foreplay rather than to rub one out. Then again I know people that get off to things stranger than explosives sliding out of a woman’s cunt. You can always fap to the scenes in the gallery once you have finished the game.

ATOM GRRRL!! has a good thing going. If you’re someone that doesn’t like non-linear stories or comedy in their VN then this might not be for you. The same holds true if you’re just looking for something to fap to. Unless you’re into a girl crying out “Puss in boots, noooo!” during sex.