This morning I rubbed my eyes in disbelief. As I opened Gmail, the chilling words of the new email from Nutaku, sent a proverbial icicle sliding down my spine. The shittiest game on Nutaku, is being shut down (EDIT: I misunderstood. All affiliates were asked to stop promoting the game. This game is still playable on Nutaku’s website. It’s confusing, because they’ve been shutting down games every few months).

Studio Kinkoid’s Harem Heroes, is being shut down. Where is the outrage from the fans? Won’t anybody think of the children?

Studio Kinkoid has been making fucktons of money with their product. They have been adding content, without improving basic gameplay. I haven’t played Harem Heroes in ages, because the game frankly hasn’t been able to fucking boot. Last time I did play, the combat system was still an RNG simulator. You clicked “battle”, and that was it, numbers happened. Kinkoid should have been smarter, to start adjusting their product to improve their standing in the hentai game market, instead of relying on the low-as-fuck standards of the customers. That shit is not gonna last, the standards of customers are bound to grow, as better games enter the market. The better services cannibalize your customer base.

I don’t know if they hired any new people, to improve any aspects of the game. They sure as hell made enough cash from it. Whatever the fuck they were doing with their hundreds of thousands in revenue, competing in open battle field with superior products, is not viable. Your game sucked. 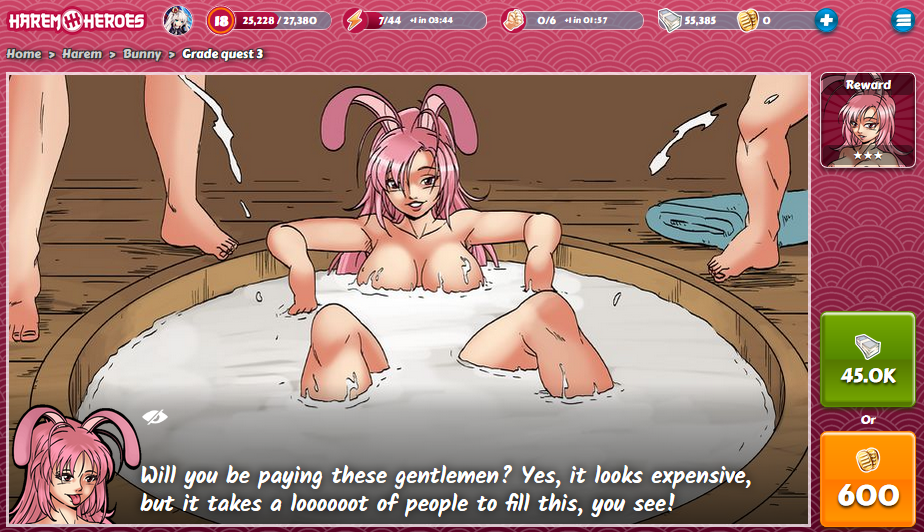 What I personally realized mid 2017: Just because the standards of the customers are low, is no excuse not to do things better. Shooting as low as you can, doing the least effort for maximum profit, is only going to get you so far. Eventually, you have to improve.

FUCK the developers of this game, they are little thin skinned bitches that use classic F2P mobile game tactics to take your money and cheat you. You will come to hate the game from all the problems and issues that you experience because they see you only as a wallet.

I think most of the F2P design decisions are based on expected return of investment. Designing anything like a fully fledged combat system, takes tons of development hours from people whose salaries run in several thousands a month. With so much competition in the gaming market, it adds tons of financial risk. It’s easier to rip off existing concepts with a proven track record.

Game is still up and running just fine.

I know. I updated the article when new information emerged. If this stupid text wasn’t getting traffic, I’d delete it today.

This game sucks further now. game mechanics makes no sense,it’s a essentially pay-to-win, and after 5 minutes of idleness you have to refresh. Because I’ve nothing better to do than click buttons all day between the 30-90 minute wait between things. Spread the message of their suckage so their company dies!

They’re already branching out into other business fields with the revenue from this hustle. They also seem to sponsor Newgrounds. I don’t believe the company is disappearing anytime soon.