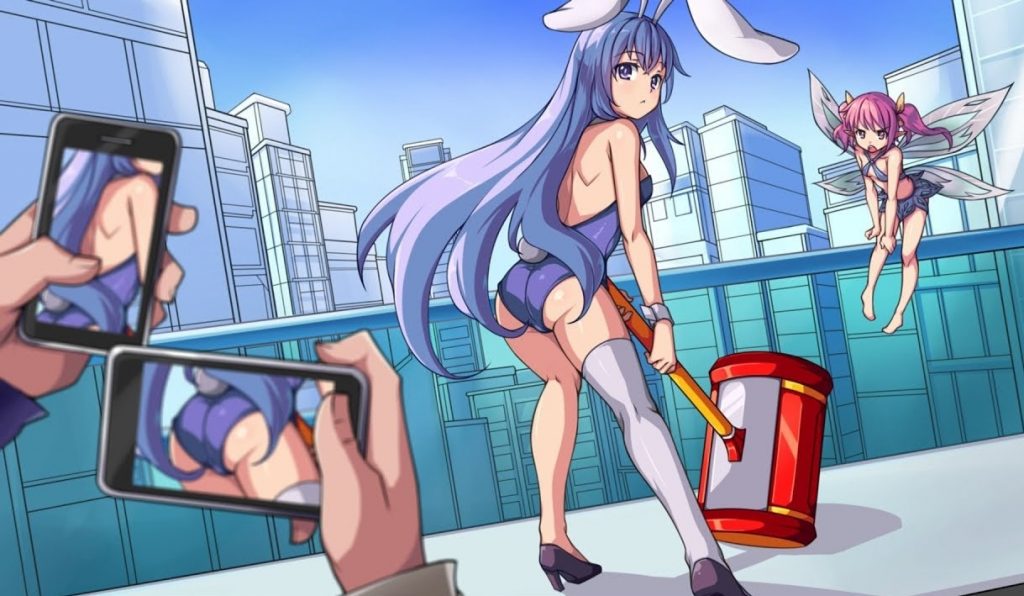 “Rabi-Ribi”, developed by CreSpirit, published by Sekai Project. A cute and ecchi 2D platforming Metroidvania game starring an adorable bunny girl with lots of skin to show. Released on the 3rd of May, 2014. Available on Steam for $17.99.

In Rabi-Ribi, you control Erina, a rabbit who was separated from her master. She was turned into a human, which she gets adjusted to surprisingly fast. After first awakening in a cardboard box in a dark building, she encounters a familiar face before drifting into unconsciousness again. Sometime later, Erina is awakened in a forest by another mysterious girl, who leaves her to survive on her own. After that traumatic experience, she decides to venture back home to reunite with her master.

The story in “Rabi-Ribi” is more complex than the above synopsis. Putting things simply, Erina meets Ribbon, a half-naked fairy girl. They team up to help one another. While cutscenes are prevalent in the game, they don’t contribute much to the overall narrative until towards the end. Much of the story is inconsequential, filled with Erina and Ribbon’s interactions with other characters on the island. The dialogue between is charming, if a bit cliché at times, poking fun at how contrived certain videogame tropes are, like how Erina and Ribbon always fight a boss when they meet a new character. The comedy was cool, so it was jarring to see the game start taking itself super seriously towards the end.

The game is a standard 2D exploration game like Metroid. The areas have enemies and environmental hazards you won’t be able to overcome without upgrades. You must thus go out to explore the world and power yourself up for future challenges.

Erina’s first three weapons (the Piko Hammer, the carrot bomb, and Ribbon herself) aren’t very versatile. By continuously defeating enemies with one of the three, however, you level that weapon up, increasing its attributes. While I was initially horrified of grinding enemies, just to level up items, Erina’s primary arsenal gains levels quite fast. Beyond that, scattered throughout the 10 different areas of the world (including sub-areas) are power upgrades, just waiting for Erina to grab them. These upgrades make traversing the world much easier. You gain the power to swim underwater, reduced damage from spikes, a slide, a high jump, and more. The world in Rabi-Ribi is large, full of hidden passages, and secret items. Erina’s melee attack is assigned to one button while Ribbon’s projectiles are assigned to another. Both run off their own power meter, which depletes with each successive attack. You can’t spam attacks recklessly, due to limited SP and MP gauges. All upgrades to Erina’s hammer and new magical spells for Ribbon use these gauges. The enemies you’ll be hopping past aren’t very varied, but they are entertaining. For example, you are chased by an extremely obsessed group of bunny-loving girls that want to capture Erina at all costs.

The artwork overall is soft and easy on the eyes. The character portraits are slightly too static for my liking, with only characters’ expressions changing during conversations. The sprite work you’re seeing the bulk of the game ranges from alright to good. Every character is super deformed outside of dialogue. Much like living breathing real-life rabbits, the game is too cute for its own good. Everything is smooth and pleasant to look at, except that things tend to get crowded during normal enemy encounters. When there are streams of bullets flying everywhere and Ribbon is firing a screen-length laser of bunny-based destruction, it can be a challenge to see oncoming bullets. Sprite overlap when Erina is too close to human enemies also obscures their sprites, making it hard to see what attack they’re queuing up next. The areas in the game were given more or less equal care, though the tilesets in a few areas aren’t fully detailed, making those areas feel kind of bland. The music is worth mentioning since four different composers contributed to the score in the game. It’s overall a very upbeat soundtrack that can be appropriately tranquil, mysterious, lighthearted, or energetic when the situation calls for it. Some songs are definitely better than others while some are good, yet repetitious, and some are simply passable. It’s entirely possible this is due to different composers creating different songs for the same game, so it’s only natural to notice small patterns like that. Overall, the presentation in Rabi-Ribi feels professional, polished, and adorable.

Rabi-Ribi has no voice acting.

For a cutesy platformer, Rabi-Ribi contains every sound effect you would expect. Happy boings accentuate Erina’s jumping, all the projectiles appearing on screen come out you with bubbly, pleasant noises and even the explosions provide a level of sugarcoating to the whole package. Rabi-Ribi is a charming, adorable experience full of large-chested girls, and flat-chested girls in skimpy outfits. Glimpses of panties, lingerie, and the ever-present bunny suit make this an adventure for your genitals. There’s also a teasing, dominant succubus who insists that Erina refers to her as a big sister, many cute things like that.. In closing, Rabi-Ribi is a title that surprised me with its thoughtful design choices. While the story is more or less totally absent throughout the game and the lewd content is lacking, the gameplay more than makes the package worthwhile. Download Rabi-Ribi on Steam.