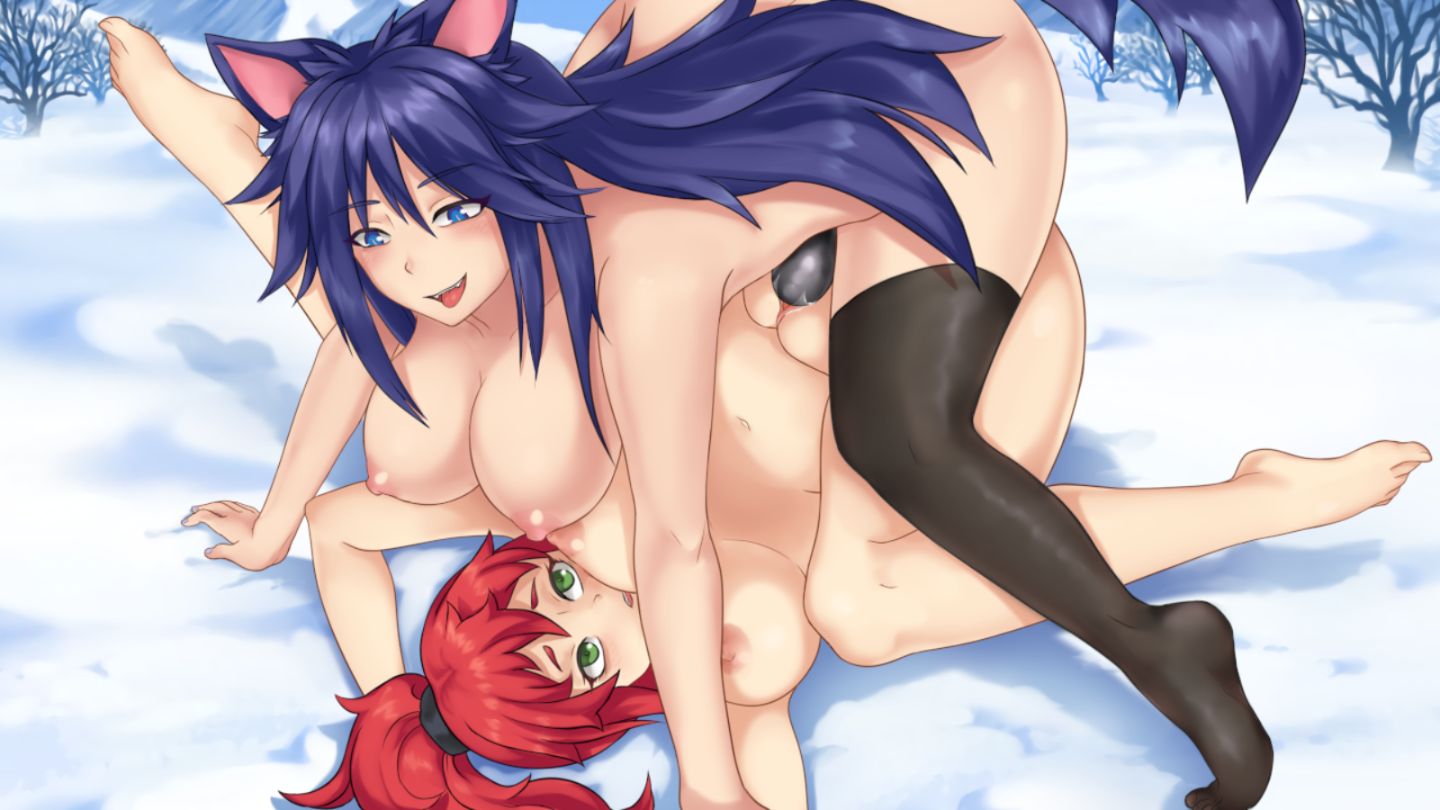 After her sister is kidnapped by lust demons, Ada has no choice but to go after her! The search begins as she explores the hidden dungeons in search of her sister! Hopefully she won’t be corrupted along the way!

As a Patreon title, the story was developed piece by piece in a methodical fashion. Meaning, the story progresses in much the same way. Play the game one dungeon at a time, defeat one boss at a time. Everything is very linear.

The plot is average at best. You need to find all the “monster girls” so you can use their magic. Then you need to master all the magic gems to grow even stronger. Then you need to save your sister and defeat the final boss. It’s predictable, but it works.

The game itself provides no setup to your adventure. You simply arrive at a castle and are told to catch monster girls. The opening cutscene shows a girl named Serena get kidnapped, but that’s it.

You are Ada. Your sister is Serena. You are part of the house of “Grey Casters”. Your mother lives on a different continent. You are a prodigy mage. The first problem is, none of this is explained in game. I had no idea that Ada and Serena were sisters. I thought they were just close friends. And I had no idea my character was a noble-woman. The opening made it seem like she was just a traveler!

The second problem with the story is that it breaks the fundamental rule of story telling: Show, don’t tell. You are told that Ada is a prodigy royal mage. Unfortunately, that has no impact because she seems average and only knows one spell.

Another rule of writing is, don’t include unnecesary information. Its bores and confuses readers. It damages the flow of the work. The writer includes tons of content that you only read once and never hear about again.

At the beginning you hear about the Moira Forestlands, the obelisk of Rivendale, the geomancer’s magic, and many more topics. All of these ideas are dropped and forgotten about shortly after.

The game was created with the RPG Maker MV engine. You move with the arrow keys, and press the spacebar to interact with objects and people. You can also click to move, and hold the enter key to skip dialogue. Press Shift to hide the text box.

The game cycle is simple. Leave town to fight enemies and make gold, then return to town to purchase equipment and items. The pause menu has a “Help” button that serves as your quest tracker.

Players can purchase treasure maps from their home base, then dig up gold and items in their spare time. There are multiple NPCs that want to play cards with your character. It’s basically blackjack.

Each dungeon has a slight jump in difficulty. Will you level grind your way out of the problem? Maybe wear a lewd outfit to enhance your abilities? Or will you find a new weapon from a treasure chest? The choice is yours!

The game allows you to prostitute yourself, but you barely make any money, so there’s no real temptation to do it.

Many puzzles in this game require a lot of concentration and are more frustrating than enjoyable. Especially late in the game, some puzzles will make you want to rage quit. Players can purchase upgrades for the castle, including a garden to gather ingredients.

The crafting system would have been great, except that it costs gold to produce potions. Even when you use your private crafting table, you have to pay a hefty fee to produce a simple healing potion. You feel punished for relying on crafting.

The anime style art is gorgeous but inconsistent. There’s over a thousand art assets of varying levels of quality.

As a western variation on anime art, many art pieces are far more detailed than standard anime. You see this inconsistency especially in Ada’s hair-style and facial features. Sometimes she’s drawn with heavy detail and tons of shading, while other times she is drawn hastily and in a more cartoonish fashion.

The character sprites are all very similar. Lady Serena and her sister Ada both look nearly identical. It’s like the artist used an image search engine for “Anime Body Base” then changed the color schemes between characters.

There are 17 outfits for Ada to wear. Each has unique stats and unlockable abilities, and they’re spread out evenly throughout the game. One outfit might be geared towards magic while another is focused on critical strikes.

Because the game was created in RPG Maker MV, players can customize their window resolution and navigate via the mouse button. This means you can have multiple tabs open, in case you want to listen to music while playing. It’s a nice quality of life feature.

Many regions of the game have unique textures that create a truly foreign-feeling environment. There’s even a winter white ice zone! It’s genuinely different and fun to explore!

The main problem with the visuals are the use of some generic RPG Maker assets that just look wrong. For example, “Helper Helena” in the weapon shop looks like a dude. And the matron of the church sure doesn’t look very feminine.

In spite of these minor flaws, the CG images are spectacular, even if inconsistent.

The sound effects are primarily standard assets from the RPG Maker library. Sounds are often used in conjunction with puzzles to indicate player success. This auditory feedback lets you know you’re on the right path. Altogether the sound effects fit well, but never really impress. A couple of unique or unexpected sounds would have made this game significantly more exciting.

There are 18 musical tracks in this game. They tend to fit well, but not all the time! And when it comes to video game music, bad music can be a killer! For example, when your home and castle get completely destroyed, the shock and horror reflected in the dialogue is not matched by the music. Instead, various chordophones were playing a soft tune! Harps and other string instruments do not convey fear! Even if other moments were great, the bad music choices stick out like a sore thumb.

Overall this game is vanilla in every sense of the word. There is no deflowering or impregnation. This is very strange, because some scenes actually mention impregnation in the dialogue! The protagonist has to use magic to protect her womb from unwanted sperm. Yet in other scenes, she does not use magic and the text clearly states her womb is filled.

Sex stats are tracked from the pause menu, but they don’t really have any purpose, because sexual content is never placed in your path. You actively have to lose battles to have sex. Why track the stats, if you never have a chance to raise them?