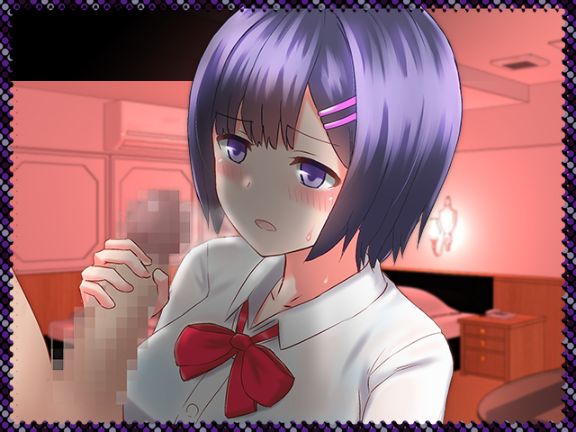 After his soul was sealed away by an exorcist, the mischievous demon named Vice has been stuck in a glass vial. A clueless school girl named Natsu finds that vial. Vice manipulates her into releasing him.

With the last of his power, Vice curses Natsu! She will die in 20 days, unless she frees him from the vial. And so, they sign a contract. She will free him from the vial, and in exchange, he will lift the curse!

And just when you start getting comfortable, you learn that an exorcist has come to town! If they find you, they’ll destroy the demon, and you will have no way to lift the curse!

The writers do an excellent job at foreshadowing. You hear rumors about the pervert teacher, you see mixed bathing is available in the residential zone, and you see strange items available in the men’s bathroom! None of these things are accessible at first, but they leave you excited for the future, and ready to play more.

There are 12 endings in total. Five are good, four are bad, and three are neutral. The true ending is called “Anthesis”, where your character decides to live a happy whore life for all time. The term “Anthesis” describes a flower opening up its petals to take in sunlight. And so the true ending of the game, is for your shy schoolgirl to open up and fully express her sexuality.

Once Vice is freed, he offers to erase all memories of what happened these past 20 days. After that, the game enters infinite mode. Everything is exactly the same, just no time limit! There’s at least six hours of content, but you can complete the game in three.

The game was created with RPG Maker, but has minor scripting that makes it unique. You move with the arrow keys, and press the spacebar to interact with objects and people.

There are five stats and three currencies to track during play. It sounds scary at first, but it all flows naturally and easily. I have a terrible memory, and even I managed to understand it all.

The five stats are energy, lewdness, charm, popularity, and infamy. Each of them does what you think it does. Eat food to recover energy. Raise lewdness to unlock new scenes. Train your charm to get payments. Increase your popularity on the internet to get more payments online. Increase your infamy so that people will treat you like the town slut.

With 110 scenes and only 37 base CGs, the developers had to be creative to avoid making the content feel repetitive. One of the many ways they did this was by devoting a scene to Natsu finding out a man took video of her having sex.

The world design is very advanced. As days pass in game, more locations will be unlocked on the map, such as the academy, the park, and even a witch’s Workshop! Every region has different NPC placements dependent on the weather. You can purchase an item to trigger rain to unlock new events, assuming you’re going for a whore playthrough. This makes the world feel more alive.

Anthesis has no voice acting.

There are 28 musical tracks in the game. The majority are stock RPG Maker music tracks. The developers drew from a wide variety of tracks, with no two songs sounding alike. Whether it’s smooth jazz with piano in the background, or a techno digital beat, each song conveys a different emotion. If not for how unoriginal they are, the songs in this game would be perfect.

There are 110 sex scenes in total, and 37 base CGs. This may sound incredibly repetitive, but there are so many variation images, you’ll never notice. Adding blindfolds and handcuffs and all sorts of accessories, these variations change the meaning of the scene entirely. While the base image may feature vanilla sex, the variations turn it into a humiliating public exposure scene!

There are too many scenarios to count. You have massages, peeping toms, train molesters, blackmail, and even sex with your teacher! This game is vanilla content done right! Better still, it dips into other fetishes along the way! If you become a total whore, you can actually call your best friend while having sex with her man! It’s called the “Bitch Ending” for a reason!

Players can decide just how lewd they want to be. Deviants may want to publicly prostitute themselves to everyone in school, but not me! I worked as a waitress while giving handjobs for money, but stayed a sweet innocent schoolgirl.

Thanks for the review!

I’ve purchased the game and downloaded the english translation from the ULMF link provided. Do you have any advice on how to apply the translation?