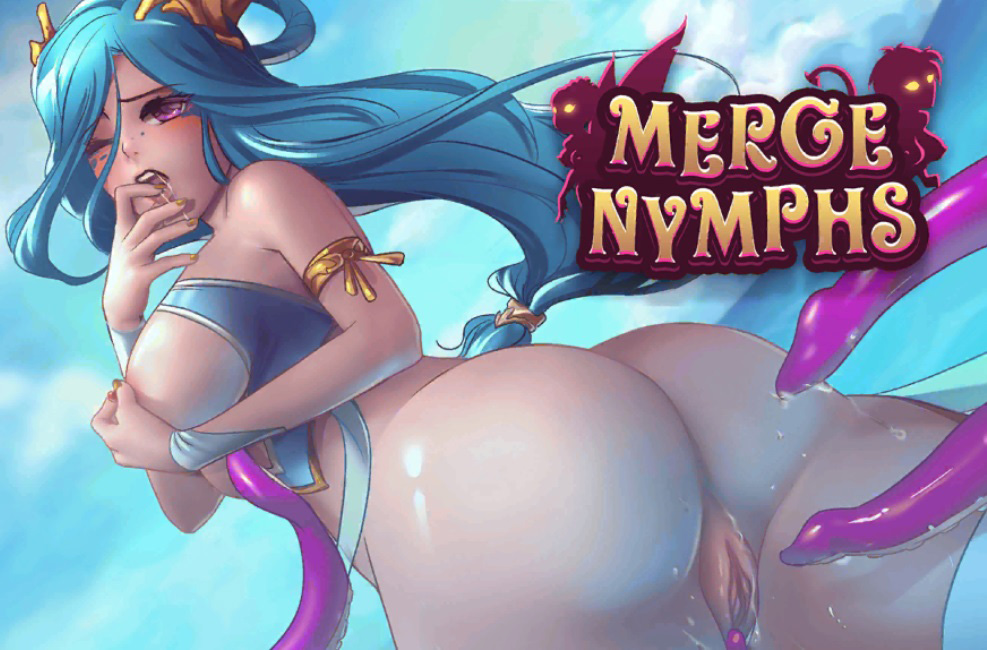 “In order to heal the planet from evil golems and pollution, gamers recruit a squad of seductive nymphs, whose magical skills transform collectibles into mergeable products.” – Official description on Nutaku.

The storytelling in this game is terrible. The sex scenes have some writing, but overall, there is very little story being told. There weren’t any spelling or grammatical errors I could spot, although I wasn’t really reading. After a few days of playing I haven’t come across a single actual story sequence. It’s a let down, because without a story, I can’t really get attached to the female characters. Without an emotional connection, the titillation is purely visual.

Merge Nymphs is a strange variation of a classic match-three game. You clean up patches of pollution by harvesting yellow heart tokens from “dick candles”. You click the yellow hearts and they heal up the land, revealing objects. You move these objects on the screen, matching three of a kind, to merge into larger objects. You seldom have a time limit, or turn limit to complete the puzzle. Once you’ve completed the Statue of Fertility, you beat the level.

Each level has various objects that you unlock by “healing the land”. You can extract collectible and usable items from these objects. Sometimes you will get attacked by enemies, which the nymphs shoot down with magical projectiles. I have not met enemies yet who would attack my nymphs specifically – they destroy your objects.

The lack of challenge-inducing mechanics doesn’t force the player to think strategically during most levels. There’s no way to fail a level unless it has a timer. I would like more challenge than this. The game is fun on a superficial level, but I couldn’t find any mechanics that would let me feel a sense of accomplishment.

The animations are very basic, but make the game come alive. The game guide girl tilts her head and winks at you, objects sparkle, the nymphs hop around merrily on the screen. The world map and levels have a very simplistic overall design, but detailed enough that the visuals don’t feel cheap.

The character art mimics the Japanese anime style well, though you can feel the western influences in minor details, like the noses. The girls’ saucer eyes are big, and their boobs even bigger!

The soundtrack is limited, but cute. You hear a handful of tracks with playful, dreamy melodies that somewhat get you in the mood for solving puzzles. The music fits the forest nymph theme of the game. The instruments used sound real and physical instead of digital, which I personally appreciate.

The sound effects are cute, but limited. Some sounds are unrealistic and strange, like when you’re “working” on an object. The mechanical clip is out of place when humping a tree with boobs. Yes, the trees have boobs.

Forest Nymphs is free to play.

There’s a stamina system; playing a level spends “crowns” which recoup over time. If you want an immediate re-up of crowns, you can buy crystals. You can also buy loot crates, to unlock new nymphs and level up nymphs you already own.