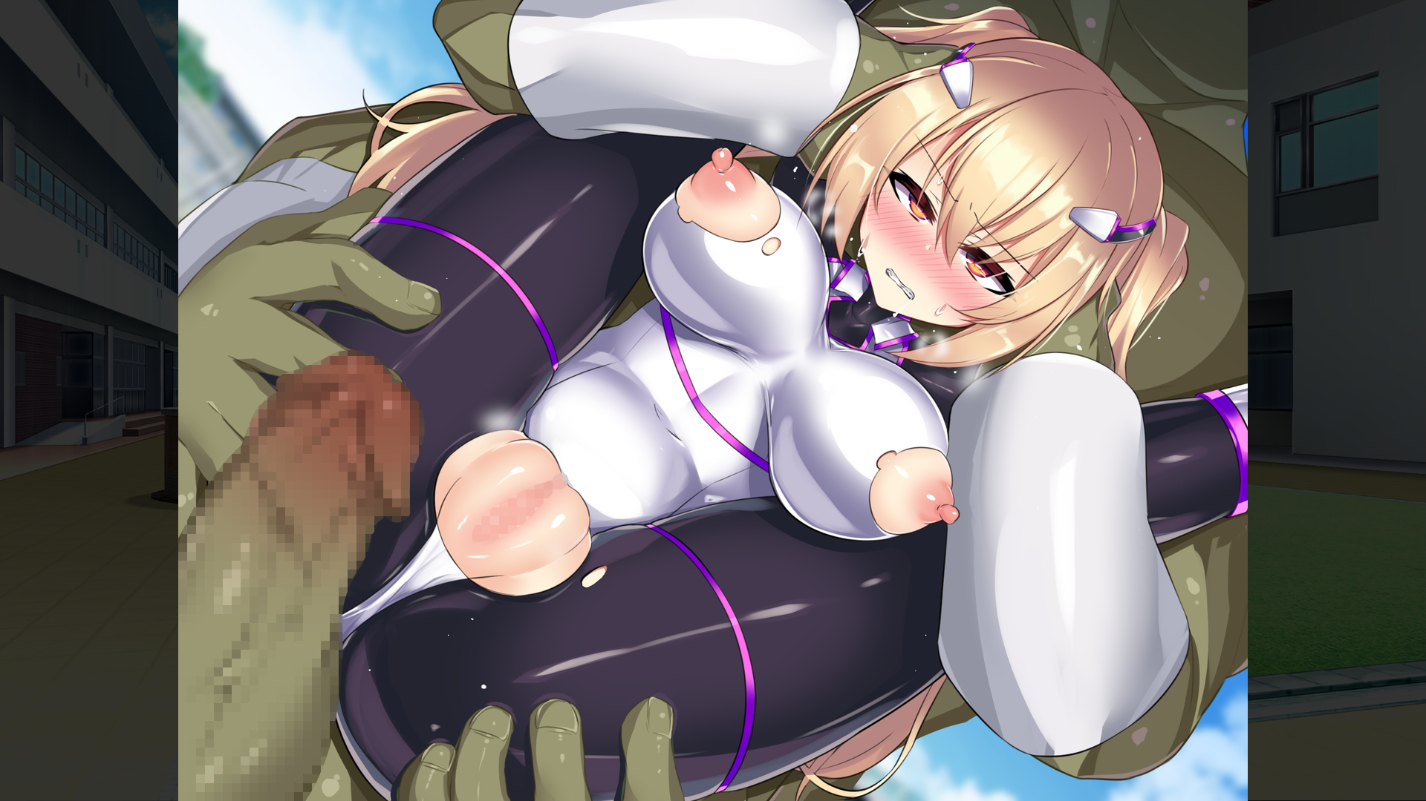 Two gorgeous hero babes are going to defeat the army of evil! The twist is, you play as the villains! Upgrade your troopers, pillage the city, and do your best to defeat the heroic beauties working against your nefarious agenda!

This game has no official English translation as of time of writing. Segments showcasing English language have been machine-translated using ReiPatcher software.

An evil organization called “Ganzita” is plotting to take over the world! Using fighters and spies dressed as civilians, this cult of evil has been planning the right moment to strike. The only ones with the power to stop them are the heroes, Kanade and Miya!

Kanade is your average blonde Japanese girl, while Miya is a silver-haired fighter from the future who brings advanced technology to help stop Ganzita before it’s too late! In her timeline, they’ve nearly conquered the world. Kanada and Miya are the last hope for humanity to drive back the Ganzita threat!

Kanade and Miya form the “Anti-Domey” faction alongside their friend Shiroko to help battle Ganzita forces. You play as “The Doctor”, a high-ranking member of the Ganzita faction, focused on using monsters and mind control to subjugate humanity. The time has come for a face-off between the Ganzita and Anti-Domey factions!

This game is a lot like Beat Angel Escalayer, except told from the perspective of the villains. You can still see how the heroines upgrade their technology over time to match the growing threat against humanity, the main difference is that the threat, is you.

The story happens in five parts. First, the Ganzita faction begins kidnapping women and imprisoning them to create dark energy. Second, you deflower the two heroines who learn they must work together to succeed. Third, you gather resources to create mind-control technology to use on the two heroines. Fourth, you test the technology and refine it by making the girls have tons of unprotected sex. Fifth, you permanently mind control the girls and bring them under your complete control. Then the game ends, because there’s no one left to oppose you.

Heaven’s Armament was created in the Unity game engine. Although it appears to be hyper complex, the game is surprisingly easy. And since things are unlocked slowly and over time, you never feel overwhelmed by the addition of new game mechanics.

Your faction has five stats, but don’t worry about that. They have no effect on gameplay and function more as bragging rights. Your stats raise in tandem with your five resources, those are what really matter!

Money is pillaged from town and used on research. Intel is gained by spying on women and is used on research. Female prisoners are gained by kidnapping them in town. Women are used to create dark energy, which is vital to leveling up your monsters. The fifth and final resource is AP pills, which give you more skill points to use in battle.

Basically, pillage everything and kidnap women. This will allow you to spend your resources on research that will increase the five primary stats. Military power for example, is dependent on the strength of your monsters. As long as you keep stockpiling resources, you’ll be unstoppable!

The sad truth is, by the time you master these mechanics, you’ll already be level 20, which is the max level for the game. I maxed out way too early and was super disappointed. Sure I could keep researching things, but I wanted level-ups as well.

Since plundering town is the primary focus of the game, it’s balanced with an “alert system” that raises over time. If you plunder a location too often, the heroines will appear to try and stop you. Fight them off and you can run away with the loot. After mission 2, you can upgrade your plundering bases to increase your earnings.

When you’re done grinding for cash, story mode missions are available to unlock new research opportunities and sex scenes. Usually, the mission has a special requirement like “finish her with your tentacle strike skill”. It’s generally a good idea to grind resources in between story missions since they advance in difficulty over time.

The game is 4-6 hours minimum. The pacing is fantastic at first, but takes a nose dive around Chapter 3. Press CTRL to skip text. The backlog and auto-mode are available in the corner menu. Battle difficulty can be changed in the options menu, though I found the default medium setting to be the most balanced. Steal resources, level up, upgrade your monsters, and destroy the Anti-Domey girls once and for all!

The game comes in 32 bit and 64 bit editions, so gamers on older systems can play in peace. Although the game was created in Unity, I only experienced a single crash, which is pretty good for the engine.

There are over 100 sex scenes in total, conveyed through 90 base CGs. The problem is, both of these numbers are inflated. Yes, there are 100 scenes, but at least a third of them come from repeated scenarios like tentacle gropings and brainwashings. And yes, there are 90 CGs, but some are nonsexual like Shiroko with the sniper rifle, while others are only part of a larger scene, like a syringe full of semen being shoved up someone’s ass. Adjusting for this inflation, I’d say there are 50 unique scenes and CGs. Anything beyond that is repeat and duplication. In fact there are over 1250 variation CGs in total. The bulk of scenes in this game are repeating or building on previous scenarios.

The writing in this game exacerbates the problem. Scenes often happen with little to no buildup, meaning they all blend together in the player’s memory. I would rather have 25 unforgettable scenes, than 50 random fuckings.

On the bright side, animations are used when your sex slaves are fucked to create dark energy. Players can determine which of the 9 possible women will be fucked, and in what position. This would have been a much greater way to set the game apart from its competition. The sheer variety of possibilities is fantastic, and far superior to fucking the same two heroines over and over again.

The artwork in this game is gorgeous but it’s often a step away from perfect. For example, a few scenes have small dicks. The dialogue says “it’s so big it’s stretching me”, but the visuals make it seem below average. There were many moments like these where it felt like the artist and the writer were not working perfectly in tandem. This is part of the appeal of smaller developers, that the art always matches the intention of the writer because they’re done by the same person. In this case, they weren’t and it shows.

This game is the perfect example of why the hypnosis fetish can be so hard to handle. Other games can use vivid character expressions and clearly reluctant women to build up the tension. But as you’ve probably noticed, the scenes in this game use a lot of expressionless faces due to the hypnosis focus. While in context it can be hot, on its own the artworks lacks personality and character.

Heaven’s Armament Heroines AntiDomi features full voice acting for the four primary waifus. The two main heroines get the most lines while the two side MILFs get fewer. According to the DLSite page, there are approximately 5000 voiced words in total, that’s about 10 pages of lines.

The sound design is fantastic, with unique assets used for a variety of attacks. A strong punch is distinct from a tentacle strike, and those are distinct from stat boosting moves. Outside of combat, the audio cues for kidnapping women and stealing from bank vaults are super impressive. It felt real and unique, you could hardly tell if stock assets were ever used. While the voice acting in this game was just good, the sound design in general was fantastic!

There are at least 15 unique tracks in-game. The main menu theme is a bouncy anime style theme that doesn’t exactly match the violence and terrorism you perform throughout the story. The main base theme is a track used in many simulation style games, because it’s a casual electric piano track that lets you focus on resource management. Creating dark power has a digital synth version of the electric guitar. Sex scenes use a beat similar to the drum loop from Queen’s “We Will Rock You”, with synth music on top. Of course the focus is the voice acting so you’ll hardly notice. Overall the music is good and enjoyable, but never used for the sake of dramatic or sad moments. The game is not an emotional work, so the music isn’t either.

There are over 100 scenes but only 50 are truly unique. All scenes are fully voiced with an emphasis on the ahegao pleasure fetish.

The biggest appeal to this game would be that, playing as the villain, you get to constantly embarrass and expose the heroines in public. The helpless civilians are all forced to watch as the heroines get fucked and their reputations crumble! However, this fetish is fulfilled after only an hour of playtime. After that, all the public fuckings are standard and expected. And since the game lacks a reputation system or sex stats for the heroines, it never feels like your choice to fuck them has any consequences.

This game is hottest when it’s new, but slowly declines in quality over time. The first time a stranger fucks and creampies Kanade, it’s shocking and exciting! But with over 100 scenes of that, the finale showing them get fucked in front of their classmates felt super underwhelming.

Heaven’s Armament has some of the most addictive gameplay in an adult game on the market today. Upgrade your forces, unlock new regions, and bring the two main heroines under your complete control! The story needs polish, and too many scenes look similar to others, but the game is still a super enjoyable experience.

Download Heaven’s Armament Heroines AntiDomi. If you like strategy simulation games, you’ll love our review of Leane of Legitimate Crown!