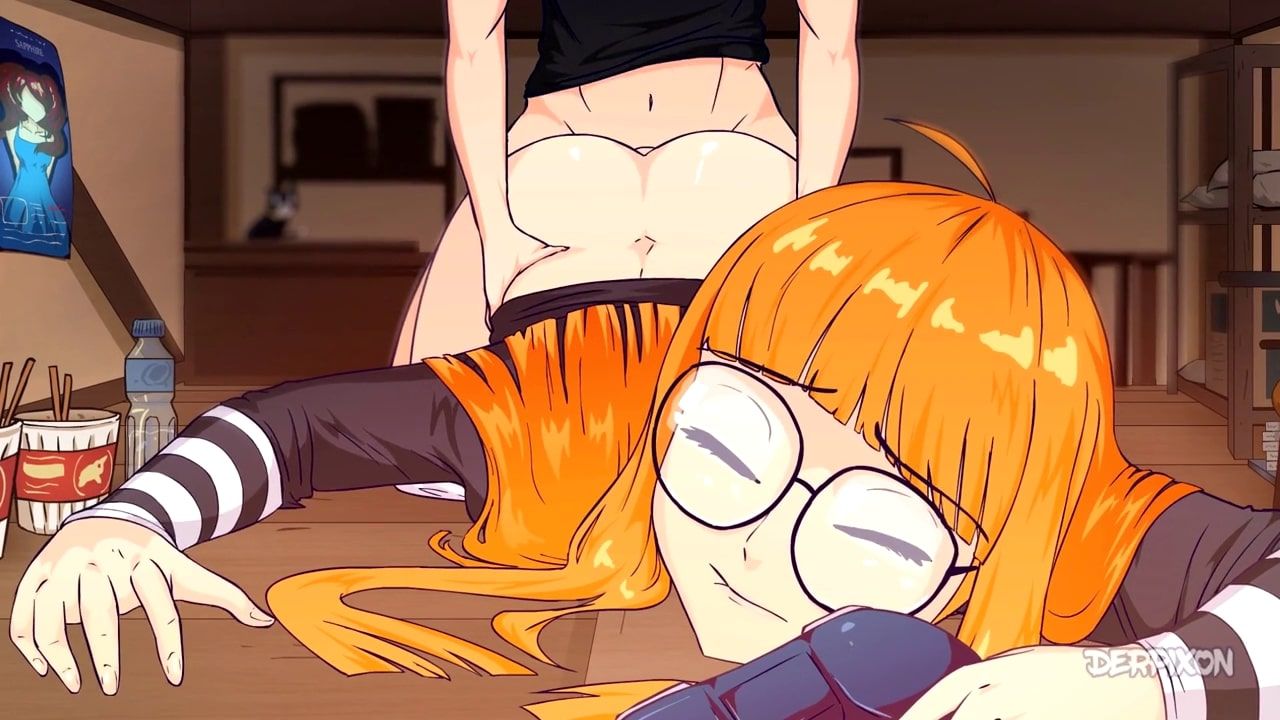 Joker and Futaba are hang out in his apartment. Futaba is waiting for a game to load while Joker eats out her pussy. Eventually the game loads and Joker starts pumping his phantom rod into Futaba’s lady hole while she plays the game. After the game ends, she discovers Joker still fucking her and suggests they call the other Phantom Thieves and train in Momentos, a fantasy realm. Once there, the other thieves put up a great fight against a monster but Joker is too busy fucking Futaba. She pleads with Joker to stop having sex and join the fight only to discover that the guy whose pumping baby juice into her is an imposter… oops!

The animation is excellent with great frame rate and fluid motion. Characters are beautifully hand drawn. Lighting and shadows are well done. Sharp colours make the episode feel livelier. The artwork uses thick lines which gives the art a comicbook-feel.

The background animation is equally good with a lot of attention to detail. Momentos is filled with sharp detail that makes every camera shot stand out. Futaba’s hikikomori room looks like a giant hub from an Iron Man movie with writings littering the background.

The fight choreography is fantastic, featuring rapid motion that doesn’t feel disjointed. Lighting is especially well used in these scenes with glowing auras and light beams. Joker’s cock size is normal size, just like Futaba’s breasts, the proportions of which stay consistent.

Most of the episode is dominated by the most well-known musics pieces from Persona 5. The most played song is a casual tune that doesn’t always match the action taking place on screen. For its credit, the song doesn’t feel intrusive. The music helps put the viewer in a relaxed mindset as Futaba’s NEET pussy receives the sexual attention it deserves.

There are musical pieces in the episode but they are far less prominent. The animators pay additional homage by playing a small segment from the official Persona 5 theme near the beginning of the episode.

Once the couple is inside the Momentos, Joker thrusts into her pussy so hard she has to hold on to the sides. Futaba’s growing annoyance is a point of highlight in this episode. The angles show Futaba in a lot of sexy positions, but the overall sex is limited in both positions and screen time and comes off as repetitive.

Persona 5 – Heart Switch is worth a watch. The sex isn’t as creative as in some of Derpixon’s other works, but the sharp animation, witty and humorous dialogue, and great musical score make it worth any fapper’s time. If you’re a fan of Persona 5 and have always wanted to see the female cast put in their place, check out this animation.