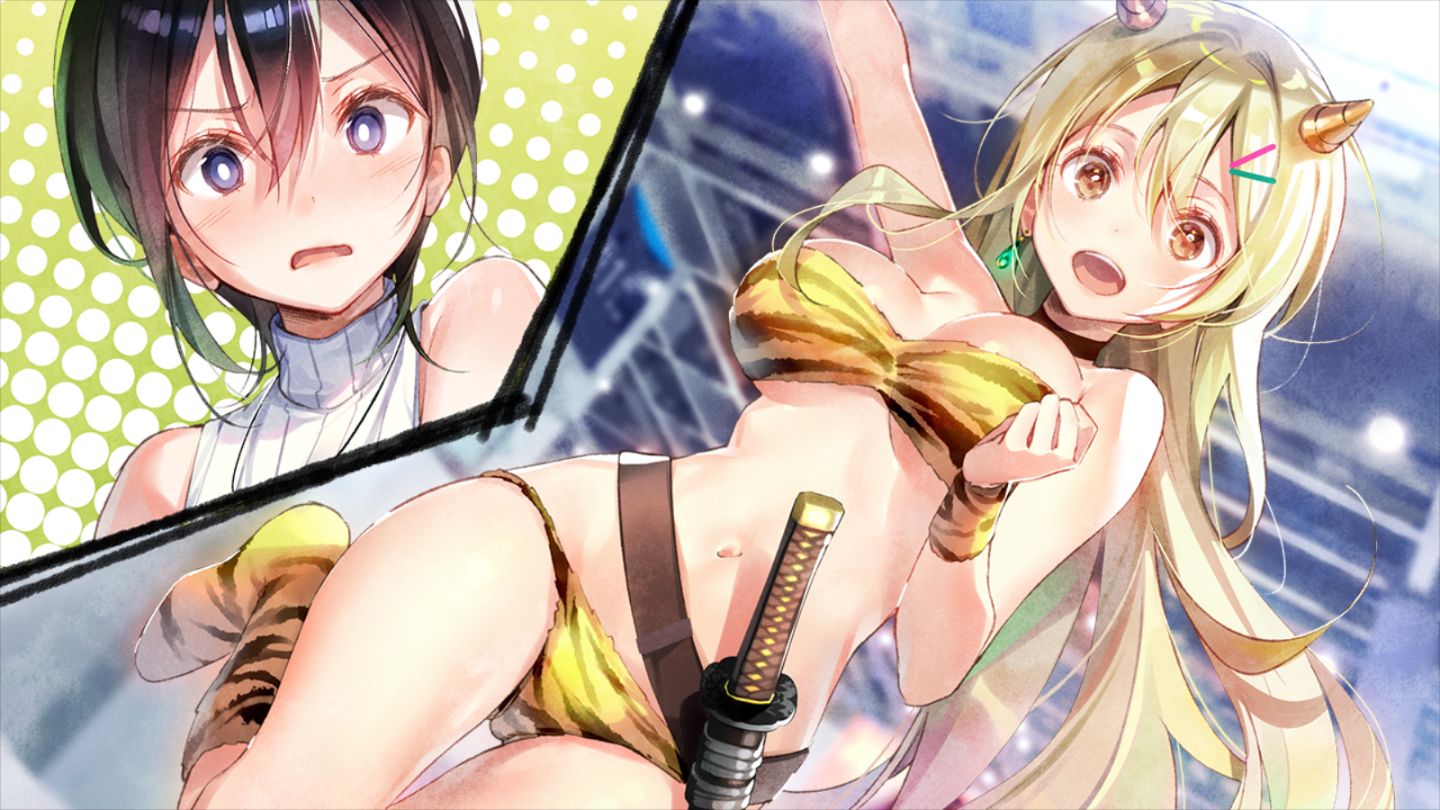 When Akeru confesses her love to her cell phone, it starts a ton of homosexual drama she never expected in a million years! Live with the cute blonde Ren, endure her advances, and learn to love waifus over husbandos!

Akeru is a complete otaku. She’s a tall brunette in love with virtual husbandos in her favorite phone game. This all changes when she meets a cute girl who steals her heart.

There is no overall plot. Every day, Akeru and her blonde female companion walk and talk and live normal lives. The entire game is very down to earth, with no magic or action whatsoever.

Akeru is not a very likable character. She spends thousands of dollars on virtual loot boxes, and cares about them more than anything else. Even when her female friend Ren tries to have a conversation, Akeru ignores her completely. At first it was funny, but after a few hours of that happening, it got depressing. Their relationship is very dysfunctional.

The protagonist, Akeru, is straight. But her blonde companion Ren, refuses to accept that and keeps flirting with her relentlessly. The story is focused on the topic of liking someone with a different sexuality. It gets hard to watch at times.

The writer is hilarious. There are many moments that make fun of popular culture and made me smile. Like when Akeru is in love with a little boy character, but says it’s okay because he’s actually almost a hundred years old and a mystic samurai. These moments were super self-aware and funny.

There are a handful of endings, with the true ending being revealed in the extra scenario. There, we see that Akeru and Ren have finally committed to each other. This was sweet, but I wish it was part of the base game.

Waifus Over Husbandos is a visual novel GAME with numerous features standard to the genre. Click the screen to “turn the pages”. Press CTRL to skip dialogue. Scroll back on the mouse to view the text log. Right click to hide the text box.

This would have been much more user friendly if it was made with Renpy. For example, there is no keyboard shortcut for the pause menu. Pressing escape will only minimize the game.

There are a handful of choices in the game, but they are greatly spread out and don’t have immediate consequences. Honestly, you can play this game for hours without ever making a decision.

The common downside with slice of life stories is the repetitive locations. These include the mall, the bedroom, and the city streets. If the game was shorter, this would be much more enjoyable. Instead, you’ll have to stare at the same backgrounds for hours.

The character designs look nice, but lack depth. For example, Akeru has a cross around her neck, even though she is not religious. And it seems like Ren was made blonde to emphasize she’s a stereotypical clueless bimbo.

Most of the game is visually bland. You watch two characters on screen, their dialogue as they speak. On occasion their eyes might widen or eyebrows will move, but overall the visuals are very basic. Thank goodness the voice actors bring life to the characters, because the visuals alone get repetitive fast.

The user interface is idiotic. Rather than a pause button on the keyboard or screen, you need to drag your mouse off the side of the screen and click a hidden icon to pause the game. I actually had to look this up online because it was that obtuse.

On the positive side, there’s a fully animated opening movie with a song that plays after Ren has moved in with you. And between big events, anime style transitions are shown, which really provide structure and personality to the presentation. This doesn’t remedy the repetitive artworks and other flaws, but it’s still a damn good video.

All characters in the game have voice actors behind them that fit their personalities.

Ren’s voice is a bouncy, spunky, high-pitched squeal. Meanwhile Shino always sounds nonchalant and calm. These performances embody the characters, and make the game so much more lively and enjoyable. The voice actors carried the project.

Considering the anime opening and transition images, this game was already visually appealing to anime fans. The voice performances as well, seem like they could have come from anime. Laughter, drama, sadness, the audio is always expressive and believable.

Sound effects are used in conjunction with voice acting to break up long conversations. For example, when a character starts cooking, you can hear a pan sizzling. The sound design was wonderfully done.

There are 11 music tracks in total, all of which can be enjoyed from the extras in the main menu.

Horn instruments and drums are commonly used in the bouncy tracks, while harp and piano are used in the emotional tracks. None of these tracks are particularly memorable, with a soft and sad track bearing the name “music box” in the title. All tracks are digitally synthesized to sound like real instruments, which is how they were able to emulate music box chimes so effectively.

Waifus over Husbandos is mostly an ecchi title.

There is kissing and caressing, but actions such as oral sex are the minority of scenes and only available late-game. Dialogue usually indicates shyness and a desire for intimacy, without crossing into outright lust. Variation images show changing facial expressions as the characters speak to each other.

All artworks are available from the main menu gallery. From cosplay to nude hugging, these lesbians have some juicy sexytimes. My main complaint is that all truly sexy content is restricted to late-game. You’ll have to play for hours before seeing any action.

Waifus Over Husbandos is a cute little yuri game with lots of content. The voice acting is downright perfect, and the dialogue is funny when it wants to be. The music and artworks are passable, the latter due to a lack of variety, but the overall presentation is enjoyable.