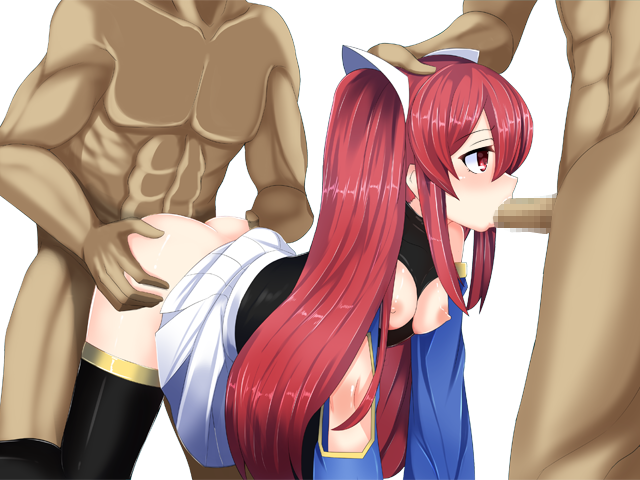 The plot of this game is basically from the anime Sword Art Online. Keiko is trapped inside a video game and needs to level up a bunch to escape. Her gamertag is “Hina”, so that’s what she’s called by most characters.

In the real world, Keiko’s brother is groping her while she sleeps. This doesn’t go anywhere, which was very disappointing. Similarly, the two endings were pretty basic. Either she stays in the video game forever or she escapes and lives a normal life. Both endings are under a minute in length, which left me feeling dissatisfied after my journey.

Considering the empty building and unused NPCs, it feels like the developer wanted to do more. The game is called the “SIE Program”, which stands for sexual intercourse ecstacy. It has tons of features like containing sex to certain zones and only allowing consensual sex. Since there aren’t enough women playing the game, male characters can purchase NPC sex slaves.

I was hoping the developer would give a long speech about his little utopia and perfect society, but he never did! When you meet him, he’s fallen in love with Keiko and only has a few lines! This was a totally wasted opportunity.

Some of the dialogue in this game is funny, but there’s not enough of it. For example, Keiko comments that this game “is a lot more advanced than my Wii U”. It made me chuckle and made me wish for more moments like this.

Kill enemies and return to town for items. There are no inns and enemies do not drop gold. Instead, you find items like silver ore, which you sell for gold.

You’re never told this, but a virgin route is impossible. Completing the game is totally random and requires sex. You need to recruit Grigals to your party, have sex until his invisible friendship stat is above 20, become a free-use whore at the sex shop, and eventually meet him there. Without this knowledge, it is impossible to complete the game, so most players are screwed.

The game has tons of features that never get used well. A crafting system is available, but never necessary. Players can upgrade unique character classes, but most of them are never needed. Although you gain new abilities until level 40, the game can be completed easily at level 25. The game will last four hours if you travel alone. If you recruit a partner, you can complete the game in two hours.

The art style is the Japanese anime style. There are nine unique images, and 14 sex scenes. These repeated artworks are the reason why the men never have faces. All of the focus is always on Keiko.

Keiko is always drawn as a gorgeous babe. She has B-cup breasts and great hips to complement her pigtails, scarlet eyes, sexy boots, and a cute white skirt!

Standing art is occasionally used, but only for Keiko. She only has one expression. I wish her standing art was more varied! It would make for a more lively experience.

Stock assets are used throughout the game, making for a visually plain experience. One dungeon is ice, another is fire, and there’s never a reason given as to why. Stock assets are fine when used well, but this developer used them in the most generic way possible. There is no way to tell this game apart from any other, except for Keiko’s unique character sprite.

All sound effects are stock RPG Maker assets. From sex to combat, all assets have been done to death already. Whether its a sword strike or a fireball spell, there are no unique assets to be found. While other indie titles may use these sound effects in unexpected ways, this one goes the distance with safe and predictable sound design.

The soundtrack has 150 songs in total. The developer dragged in the stock RPG maker library, but didn’t use most tracks. In fact, all four dungeons have exactly the same background music. Four hours and four dungeons, all using one track.

A fast violin establishes the tension of a scene in battles. This doesn’t make up for the fact that the main menu is completely silent with no music whatsoever. The fact is, you’re better off muting this game entirely, and that’s sad.

There are 14 sex scenes and nine unique CGs.

The recollection room can only be accessed by talking to the sign in front of the tutorial building, 21 times. Do not save game! There is no way to leave the scene room after you access it.

Download Hina’s Online Adventure. If you love this developer and his work, check out our review for Mellow Pink!