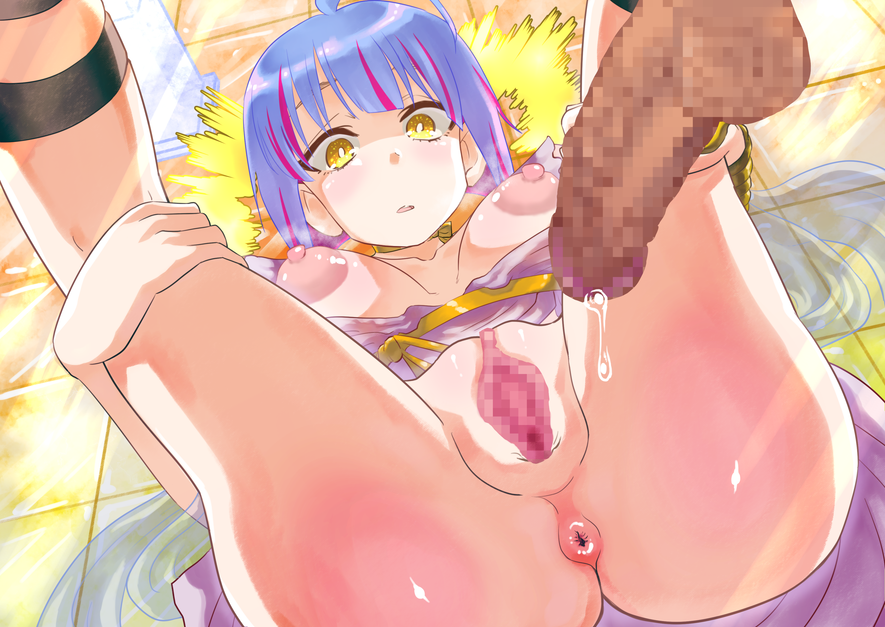 You were hit by a truck! Instead of dying, you’re being reincarnated into a new world filled with sexy monster girls! Stop their races from going extinct by impregnating them all!

Your name is Bontaro Hirano. You were assigned to this fantasy world due to your powerful fapping abilities! The six races of this land are in danger of going extinct and need some fresh semen. It’s up to you to provide it!

The game is a super linear experience. Yes, you can visit the races in any order you want, and dialogue changes if you reach the women without being harmed, but that’s pretty much it. Beyond that, every playthrough is the same and there is only one ending.

The amazonians try to fuck you before you find their queen. The elf uses hallucination magic to knock you out before reaching her. The Dragon-Newt princess is the only fertile female of her kind, but doesn’t want to be treated like a whore because of it. Each girl has some unique shtick to separate her from the rest.

At the end of the game, Bontaro fucks the goddess that reincarnated him to another world. From now on he has free access to fuck any of the girls he’s met. The credits roll immediately after and suddenly it says “they lived happily ever after”. What?! In other words, enjoy the journey rather than the ending.

Although this is an official translation published on DLSite, it was very poorly done. I suspect the developer simply used google translate. Instead of “infertile” it says “no longer fertility”. And there’s an overall lack of punctuation and grammar indicating this translation was not done by human hands.

A Nerd Who Has Sex With Girls in Another World was created in RPG Maker MV. This worked to the advantage of the developer since MV will not crash when it detects missing files.

There is no text log or ability to hide text boxes. Hold Z to speed up the game and dialogue. There are no battles or game mechanics beyond talking to NPCs and choosing sex acts.

The art is Japanese anime style, but the monster girl focus ensures a wide variety of visuals. Like the skull worn by the amazonians, the horse legs of the centaur, and the cartoon-inspired fox girl.

There are seven girls in total, each with four unique CGs. These artworks appear during sexual encounters with them depending on your actions. Will you be passive, aggressive, skilled, or drop the load?

There are 28 base CGs. This is important to mention because the developer claims “a total of 178 illustrations”. Many players have felt misled into thinking there are that many scenes, but the developer was talking about all variation images and art assets in general. In reality there are only 28 unique images.

Besides the goddess and amazonian races, which appear human, there are five unique character designs in total. The centaurs have a woman’s top but a horse’s bottom. The elf girl has pointed ears and tons of freckles. The demon girl has a third eye and horns atop her head. The fox girl has big ears, a small snout, and six tits! The Dragon-Newt race is a hybrid that looks similar to lizards with claws and fish ears.

It’s honestly surprising how many unique sprites and how much world design went into this game. Like the multiple centaurs farming carrots, because horses love carrots. And how Bontaro’s character sprite looks like Frisk from Undertale, and has buttery smooth diagonal movement not commonly seen in RPG Maker titles. And the fact that each of the seven waifus has her own unique sprite! If not for the use of stock assets for the setting, the visuals would appear flawless!

A Nerd Who Has Sex With Girls in Another World has minor voice acting for the amazonians and the demon queen. These are usually standard moans, but not always. Nonetheless, the use of voiced lines is too rare to make a fair judgement on them. The game would be virtually identical without them.

Sound effects in this game come from the stock RPG Maker library. Due to the lack of battles or puzzles, the sound design is entirely focused on menu chimes and sex scenes. Even then, stock assets are used without any focus on realism. The sound design overall is very bare-bones.

There are 26 tracks in total, all of which are stock assets like “Ship 3” and “Dungeon 2”. Thankfully, the author uses a good variety of tracks, so they can still be enjoyed even if you’ve heard them before. Like the dramatic soundtrack that plays when you visit the goddess in the realm of reincarnation. I know it’s going to end in a sex scene, but the violins and percussion instruments still fill me with a sense of accomplishment.

There are 28 CGs in total spread across seven possible sexual encounters. All scenes must be viewed to complete the game, but this is easy since they’re all obvious to find.

Horse pussy! Technically she’s a half-horse, but still, that was a wild time! And the petite tsundere demon girl was hot too! Of course, the game can be hit or miss. Fucking the lizard woman and the fox girl did nothing for me. Actually, seeing that foxes have so many nipples was pretty disturbing.

A Nerd Who Has Sex With Girls in Another World is a fun little harem game about fucking and impregnating every girl you meet. The graphics are gorgeous and the sex scenes are hot, but don’t expect much of a story. This is a game about cute monster girls.

Download A Nerd Who Has Sex With Girls in Another World. If you liked this game but want to enjoy a harem of human girls, check out our review of Introducing An Apprentice Incubus.