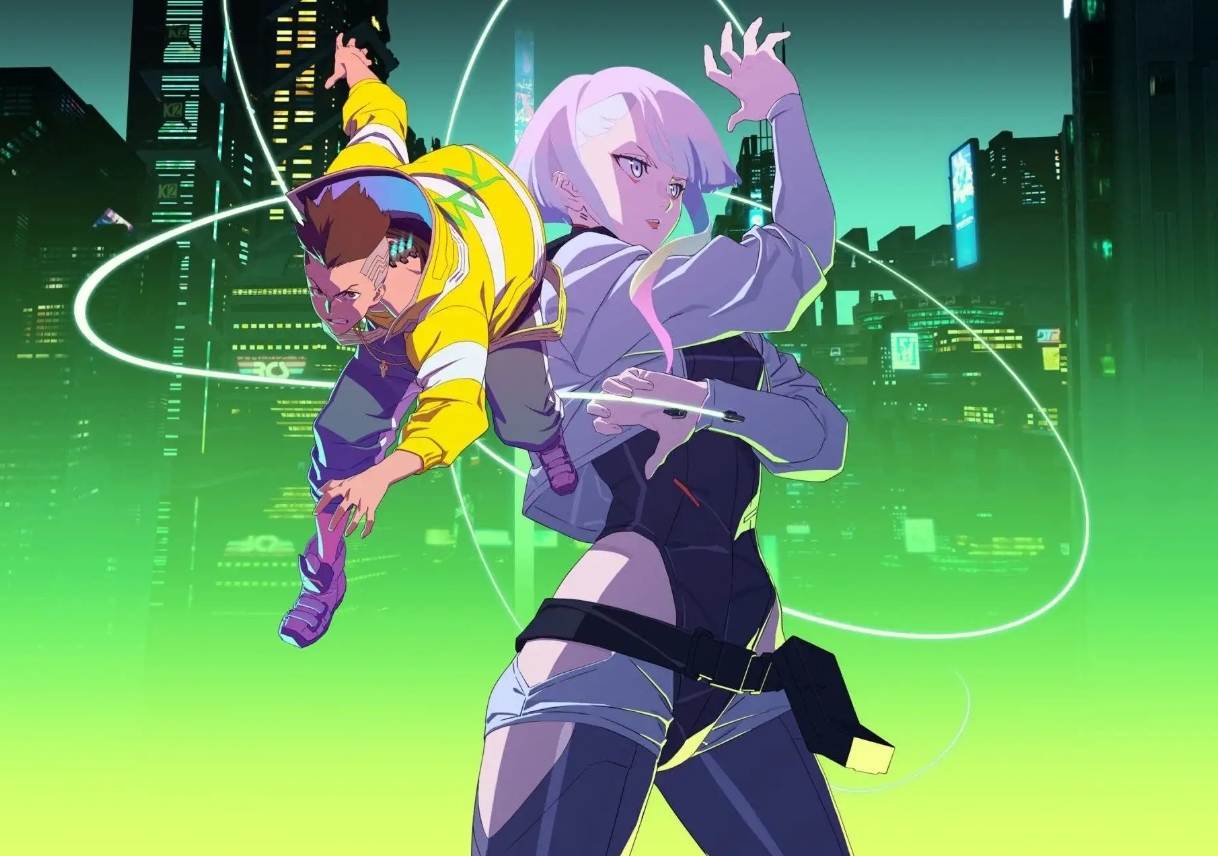 If you haven’t watched the new Cyberpunk anime, stop reading now and go. Go! It’s fucking great, the hype is warranted, go! This review assumes you already saw it, and it’s more of a discussion of the interesting stuff going on.

This story, in my view, is best understood as a critique of transhumanism. It’s a very poignant assertion that none of the shitty social dynamics in society will be gone with a higher level of technology.

If and when people can begin enhancing themselves with cybernetics, strife between social classes is still there, school bullies aren’t magically disappearing, income inequality will still be there, social problems may even be exacerbated, organized crime and violence will continue to exist. Why wouldn’t they?

Everything that’s currently dysfunctional about society will be made worse by enhancements that allow bigger mass killings than any guns we have now. Competition over social status, academic achievements, sex and resources, will practically require cybernetics, because how else will you compete?

It would be the same crap fest if doping was made legal in sports. Everyone would have to get doped, to be on a level playing field with others. Only problem is, and the show plays on this speculation, enhancing your body with too many cybernetics will tax the human nervous system to a breaking point, also called cyberpsychosis.

The spoilers begin after this point. Exit now and join the discussion after.

The first act shows David’s life as a normie. He has a single mom who works hard to put him through school, but school is shit and he gets his ass kicked. We meet all the major characters, and things quickly start rolling. David’s mother dies to a botched surgery, which awakens him to the harsh reality> You either make the dough or you’re toast yourself. He accidentally gets his hands on a military-grade cybernetics and has it installed in his spine. He meets a cute pick-pocket girl, falls in love, tries to impress her by becoming a thug, and it’s all downhill from there.

The “second act” of the show begins after the leader of the edgerunners gang, Maine, dies in a gun fight. He got cyberpsychosis and caused the death of his lover and many others before getting mowed down, leaving the gang without a leader, a task to which David rises up to. What’s unfathomable is that David learned nothing from Maine. He even repeats the same lines he did before he died, “can’t downgrade now”. David goes even deeper with the chrome jacking, becoming a successful edgerunner.

David is just an average guy. He begins to rise in the social hierarchy, not because of his talents or virtues, but because of a high tolerance level for the new tech. He replaces his lungs, his spine, his arms and legs with metal. This makes him a very effective corporate hitman. The bulk of the show, he steals and kills, helping a ruthless corporate man gain edges against his enemies, abetting his rise in the social hierarchy. It’s a symbiotic relationship.

My one gripe with the show is that many of the decisions David makes in the second act are just nonsensical. It’s like he has a death wish, which makes no sense when he has a girlfriend and a relatively good life. People tell him to “go light on your chrome”. If that’s an option, and he knows the risks, why doesn’t he?

His obsession with completing the last gig in full gear is insane. What was so special about that gig aside from the payout it would bring? Did he genuinely believe he could escape cyberspychosis, despite showing strong, worsening symptoms?

If you have a plausible explanation as to why David chose to go down the deep end, please share it in the comments, because I did not buy his motivation. If the message was to poke at the “I am special” mindsets of the average millennial, then fine, whatever. But regardless, shit has to make sense in the contexts of the characters, and I don’t feel it did.

This story is very grim, but it has great energy and the execution is amazing. The style of Studio Trigger is supremely human, making the dystopian sci-fi world feel like something you’d almost want to experience. I especially enjoyed the jab at corporate culture in the very beginning, with David being asked to submit an official form to get an exemption from the dress code at school, for one day!

There’s so much to enjoy about this show. The character designs, the art, the waifus, the voice acting and overall audio, it’s all just slamdunk awesome. Some scenes were just breathtakingly visceral, with shit exploding and people’s guts flying. The technicals are spot on, I felt immersed in the world. The action is best described as a total bullseye, drawing power from the stellar production values.

Let’s talk a little bit about the main waifu. Lucy reminded me of 2B from Nier Automata: Tight ass, short hair, sharp features, coupled with her competence and mystery, plus the sexy quiet girl vibe, everything about her just made for a compelling female character you can both respect and fawn over. She had a fantastic arc of her own, which was plenty alluded to in earlier episodes before the big reveals. I was left hungry to learn more.

And let’s talk a little about Rebecca. I have little to say about her. She barely did anything interesting, existing mostly as a source of controversy and clickbait for the show. Seriously, she was in such a minor role overall, I felt nothing for her. What was her backstory, her tragedy, her goals? Did I miss some scenes? She was also a total psycho, completely unfazed by all the carnage around her. Even Kiwi was more interesting than her.

A couple things I am still thinking about. There were some strange scenes leading up to David’s rescue mission of Lucy. For a long time, she was in a trance of some kind, her cybernetic eyes seemingly in downloading mode, or something. But she immediately broke out of the trance when she wanted. In the last scene of episode 10, she saw David, like a hallucination?

Could it be that Lucy downloaded David’s consciousness? When everyone has literal cyberbrains, is that not possible? I keep thinking whether that’s possible. It would be so awesome, because I hated the ending. It was cheap and dumb, even if romantic. I was expecting some kind of twist, but no, it was the most obvious shit in the universe.