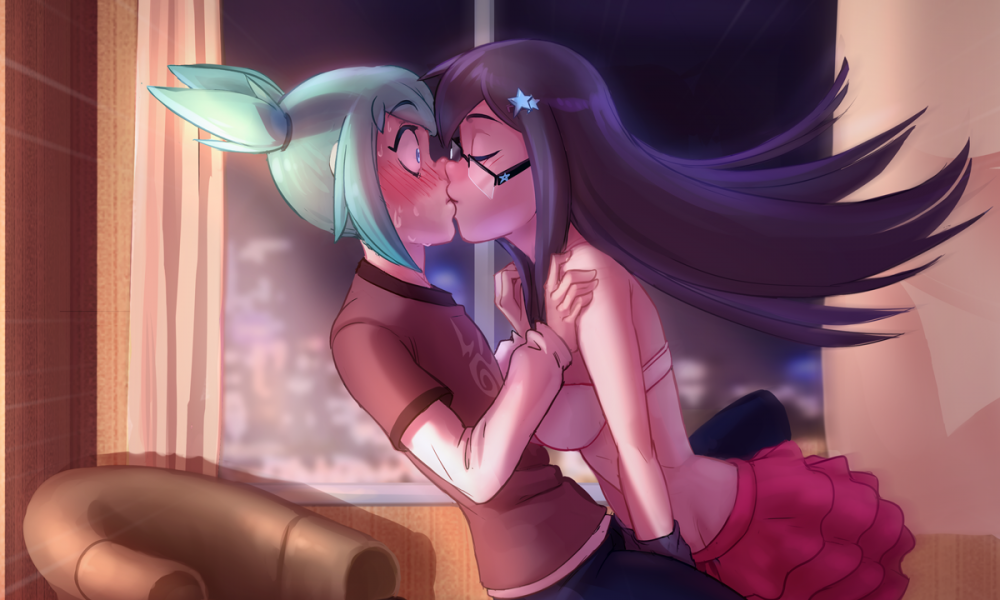 Dharker Studio’s Highschool Romance, a short but cute “all ages” western visual novel with a trap protagonist. Highschool Romance is the story of a boy named Shoji, who has the (un)fortunate fate of transferring into an all-girls school for his final year of high school. To his initial dismay, the poor bastard has to crossdress his way through his final year without anyone finding out.

But wait, how the fuck did this even happen? Well, Shoji’s parents work for the government, so he hasn’t had a permanent home. His mom enrolled him at the school, and even marked his gender as female on the form. Shoji’s mom also used to attend this same school. At that time, it was a co-ed institution. Policy has changed since then, and for various reasons, the school became open to girls only. Unfortunately, Shoji never gets any communication from his parents anywhere in the story, so we’ll never understand their reasoning here. 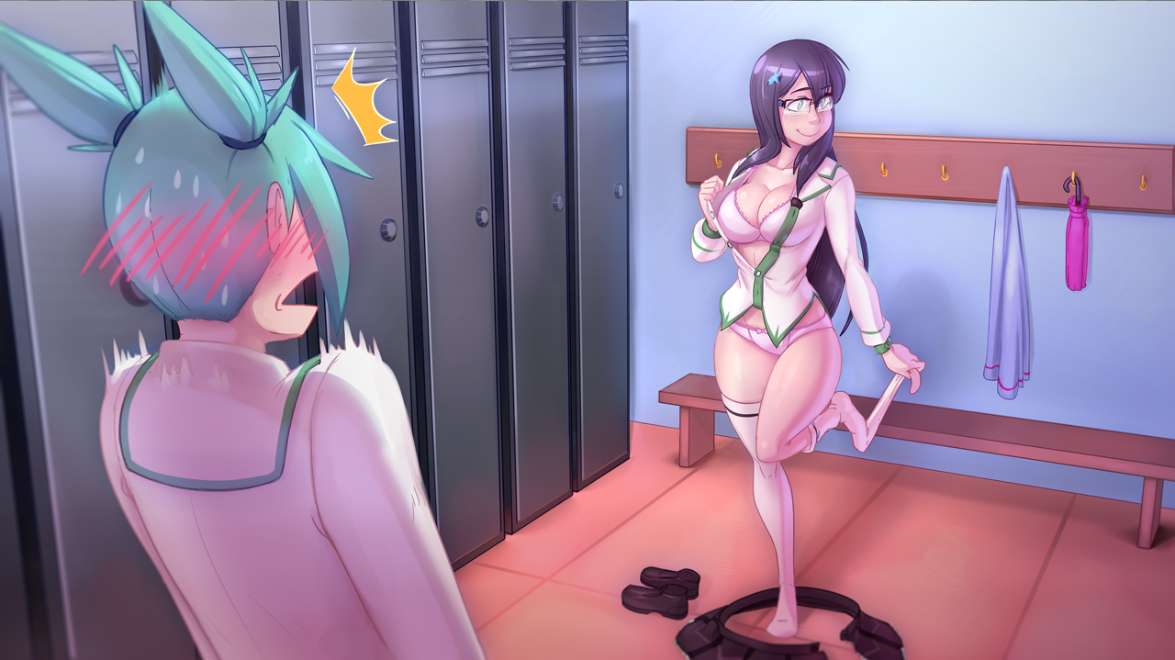 Early on, you’re introduced to Shoji’s classmates, Selina and Hoshi. Selina is the athletic type, with a passion for running track. She can be very… shall we say, direct at times. Her long, blonde twintails are fucking delicious. Hoshi is the workaholic class representative, on top of her game academically. This doesn’t prevent her from being sweet, sexy, and quirky though. I’ll let you figure out by process of elimination what the third route is. After all, there are only four characters with any art or dialogue in Highschool Romance, including Shoji. This is an all-ages game, but this third route is without a doubt the hottest and most enjoyable one. 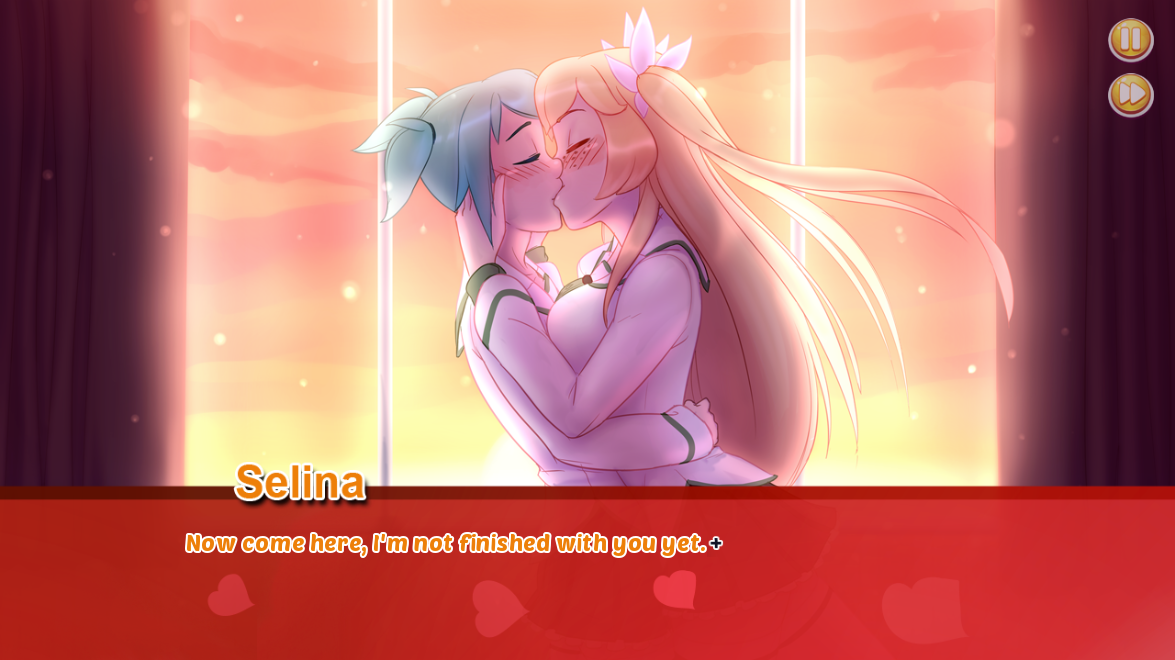 As with any typical visual novel, you have choices to make that change the flow of the story. There’s also a nifty-ass rollback feature, where you can use the Page Up/Page Down buttons or your mouse wheel to move forward and backward through dialogue you’ve already read. This also lets you reverse your decisions, in case you just want to see what happens when you make the other choice. It’s convenient, and lets you go back as far as you’ll probably ever need to go without reloading a save. My initial worry about no text backlog was gone very early because of this feature. There are also keys that let you hide the text box, take a screenshot (hooray, no shitty cropping work!), and blaze through sections you’ve already read. The menus are barebones, but they don’t look bad. As you can see above, the text boxes are simplistic, but tasteful. They went with shades of red that aren’t eyecancer. The font choice here is nice, too. I especially fucking love that dialogue font. 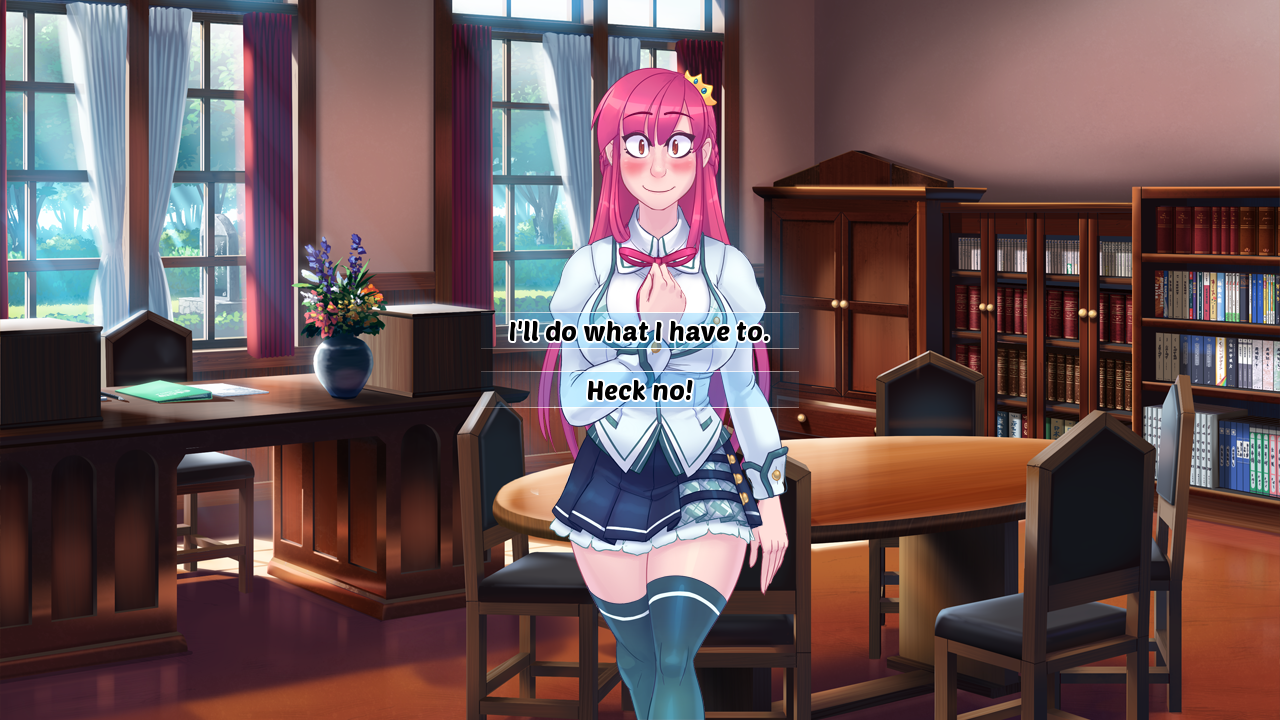 OELVNs have had a reputation for having super shitty writing, as far back as when the first finished Ren’py projects surfaced online. Highschool Romance doesn’t fall prey to this stereotype. The writing is actually competent here. It’s no masterpiece by any means, but the story was cute and entertaining. The only thing that really stuck out to me was the number of typos. I think I have screenshots of a lot of them, too. All things considered though, this doesn’t take much away from the experience. After all, Shoji does get himself into some interesting situations in addition to the main premise. 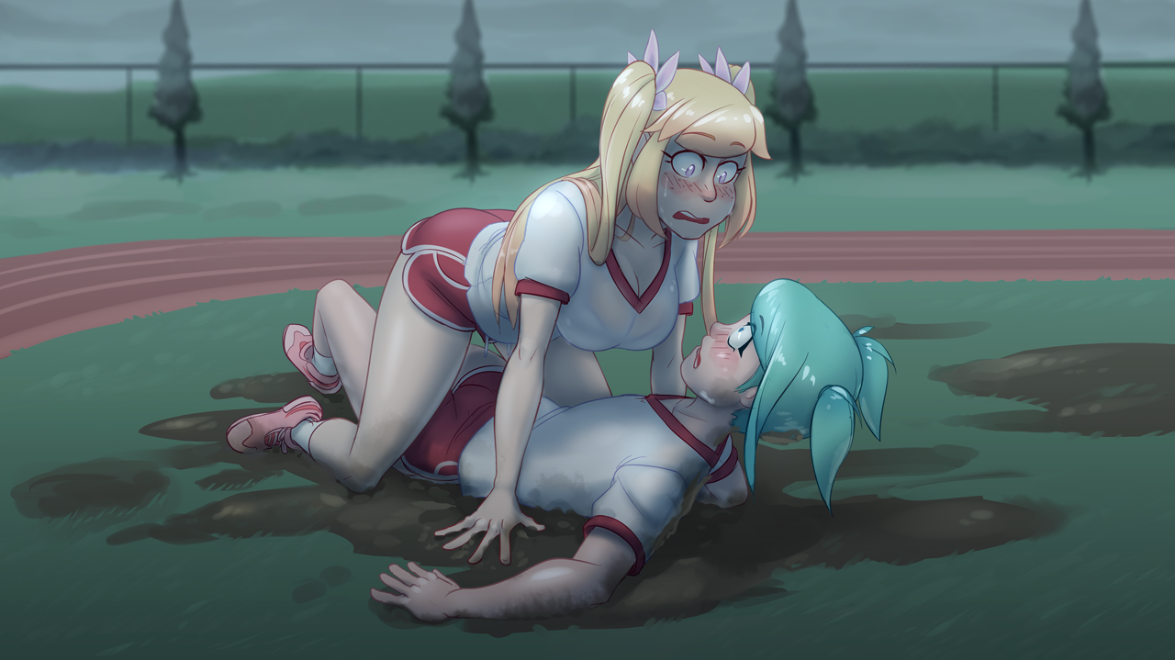 However, I can’t help but question the setting of Highschool Romance. The school seems to be very much Japanese in terms of style, yet half the cast consists of foreigners, including the principal. There’s definitely Japanese text on the chalkboards, as well as on signs in certain places at the school. And then, I know a lot of Japanese given names are unisex, but I don’t know if Shoji is one of them. In fact, that name makes me think of Shoji Meguro, of Persona game soundtrack fame. The guy’s a magnificent bastard. But I digress. The setting here is odd and unlikely, but so is the scenario. 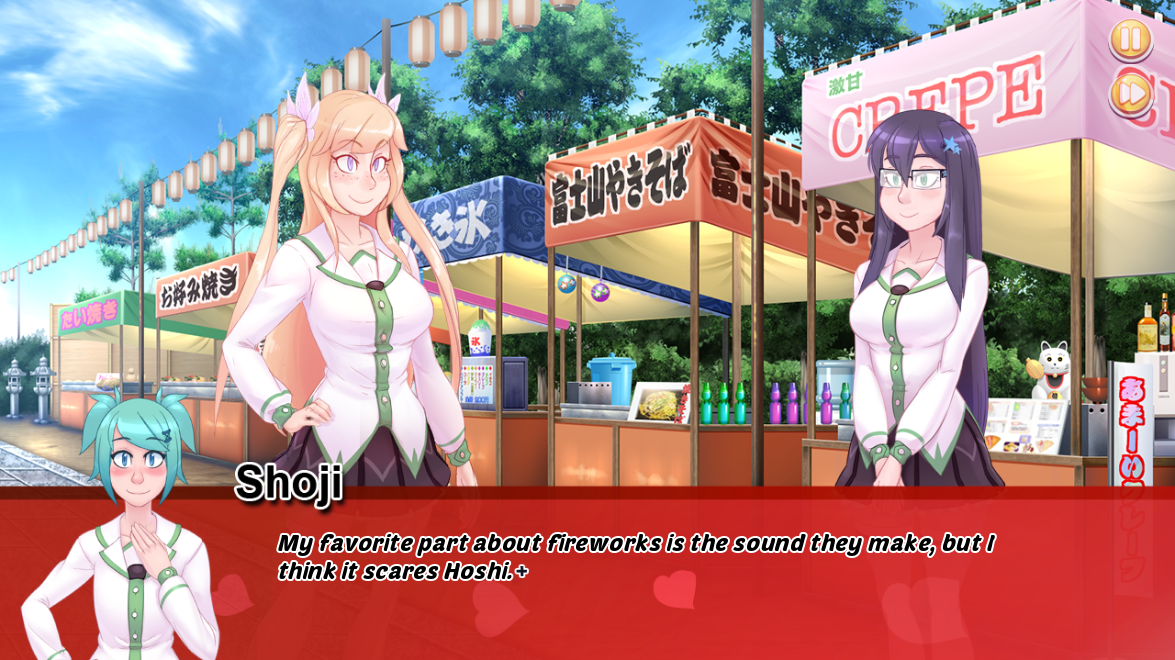 The art in Highschool Romance is what I like most about the game. Its style is a nice mix of western and eastern. Most of the backgrounds are beautiful and full of detail, and the characters look great on them. The girls’ voluptuous bodies really stand out. I’ve seen all 18 CGs as well, and each of them is given their due amount of love and care. As mentioned earlier on, the interface graphics look great too, even if they remind me of that piece of shit mobile gaming abomination that is Candy Crush. Still though, it’s not a bad look. Now, if there was anything I didn’t like about the art, it would have to be the shapes of the characters’ noses. Something about them just seems derpy. The style and shape of the eyes also took a little while to grow on me, but those super round noses never really did. 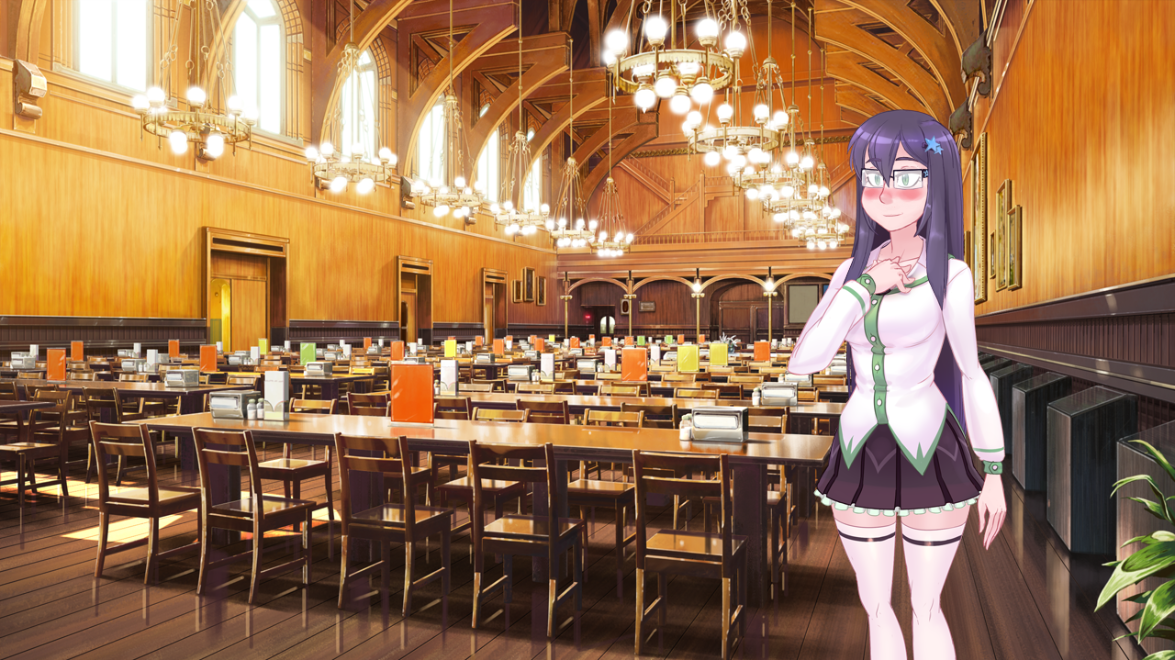 The background music in Highschool Romance is pleasant and calming. It must’ve been part of why I felt somewhat more relaxed than usual as I played through. There were catchy, gentle beats, with melodies to match. However, none of said melodies really stuck with me, except for the title theme, which was stuck in my head for a day or so. It’s serviceable as part of the background. As for sound effects, there isn’t much outside of menu buttons, which leads me to believe the budget of time and money ran out before they even considered SFX. The settings menu even has a slider for sound volume, which barely serves a purpose. In fact, yesterday, I went back and loaded the game up, with the music turned down, just to make sure I hadn’t been missing the sound effects. At points where I expected some kind of sound, there was none. For example, one scene has Shoji bumping into Selina in the hallway, and during it, the screen shakes, but there’s no sound to go with it. Writing, art, and music take center stage in visual novels though, so I wouldn’t say this is a very big deal. 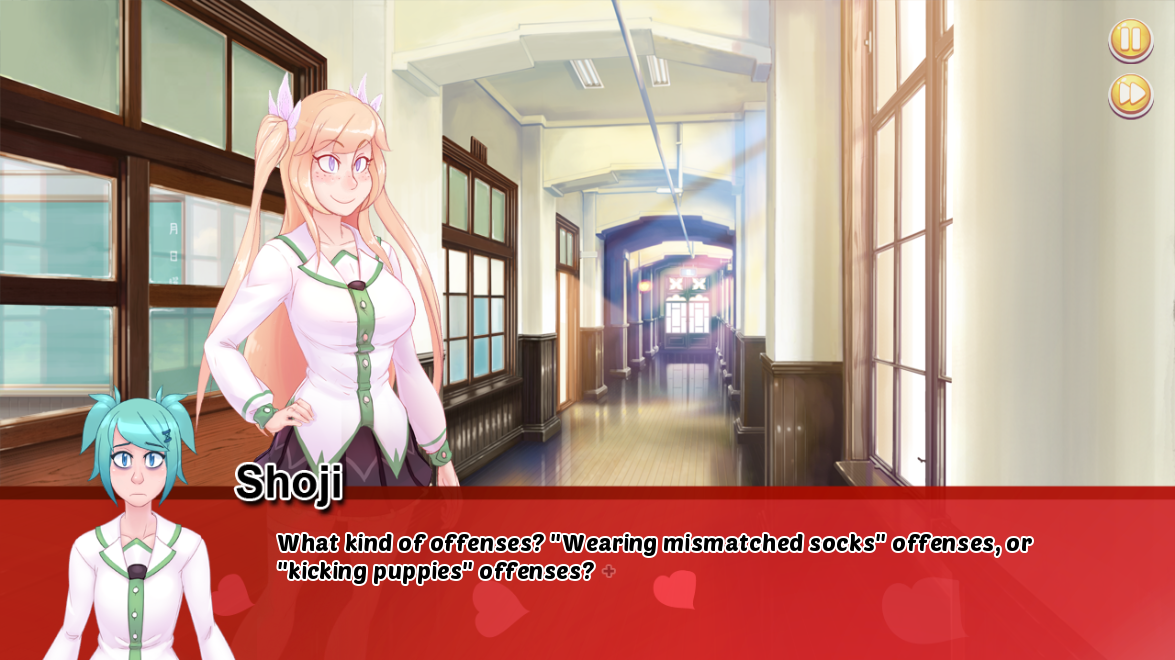 Highschool Romance falls short in lasting appeal. Literally. It’s a nice, enjoyable experience, but I saw everything there was to see in a little over 5 hours, gallery and all. Keep in mind that I’m a fast reader, even when I’m sitting on my ass and being lazy. At an average pace, it’ll probably take 6-8 hours to get everything out of this game. Most of the 18 CGs are well done, and I had a good time playing through each route. I did also notice that getting Selina’s ending was harder than getting Hoshi’s, probably because of the fact that Hoshi basically kidnaps you for vacation week. The third route, which I didn’t talk much about, is satisfying as hell, and you definitely need to buy the game to see it for yourself. It’s probably as steamy as an “all-ages” dating sim can get. For 5 bucks, you can get your trap fix on the cheap. 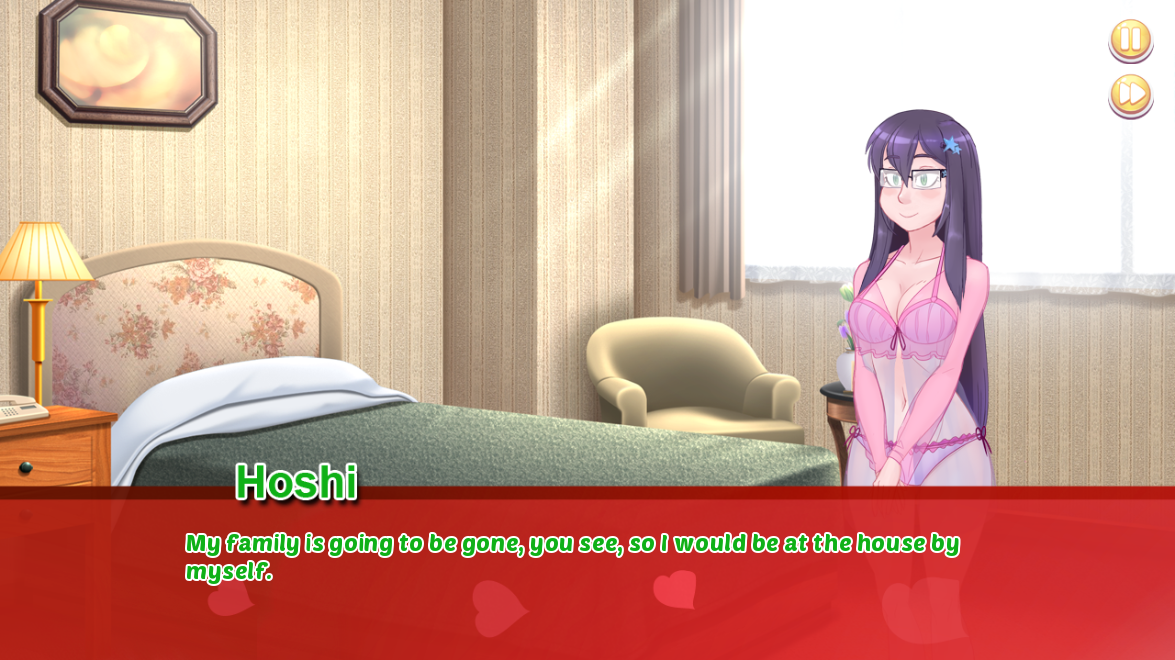 Dharker Studio has a short, but entertaining little game on their hands here. It even gets a little sexy. But, since this isn’t rated 18+, it wouldn’t be fair to give a Fappability score. If memory serves, Highschool Romance was churned out around the minor influx of visual novels appearing on Steam, which also included the now-popular Sakura series. You know how Steam is with adult content, but now that we have Nutaku’s kickass new service, VN developers will have more creative freedom. Maybe the sequel, Highschool Romance: Coterie, will be able to push the boundaries further! But until then, you can enjoy this forced feminization fantasy for $9.99.