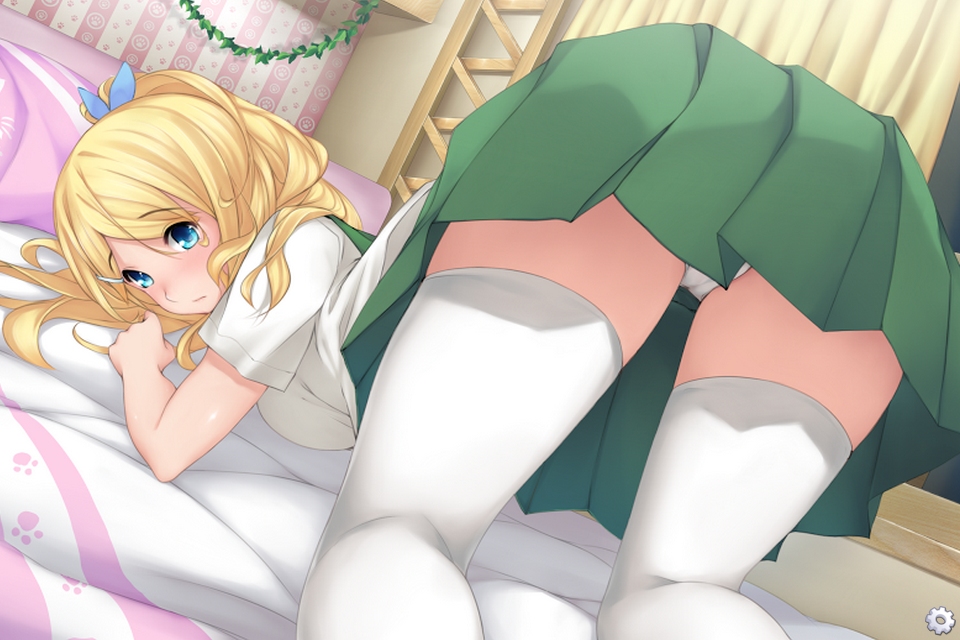 Panzermadels, developed by DEVGRU-P hits home for me. Why? Because I sexually identify as an M4 Sherman battle tank. Ever since I was a little trap, I dreamed of rolling over the battlefield launching hot sticky loads at disgusting foreigners, to liberate the shit out of them. People say to me that a person being a tank is impossible and I’m fucking retarded but I don’t care, I’m beautif- I mean, what?

This time, I’m here to give my expert opinion on Panzermadels: Tank Dating Simulator, or P:TDS for short. Of course, this is not to be confused with PTSD, and it’s not like this game will give you Vietnam flashbacks or anything… right? Fuck if I know. 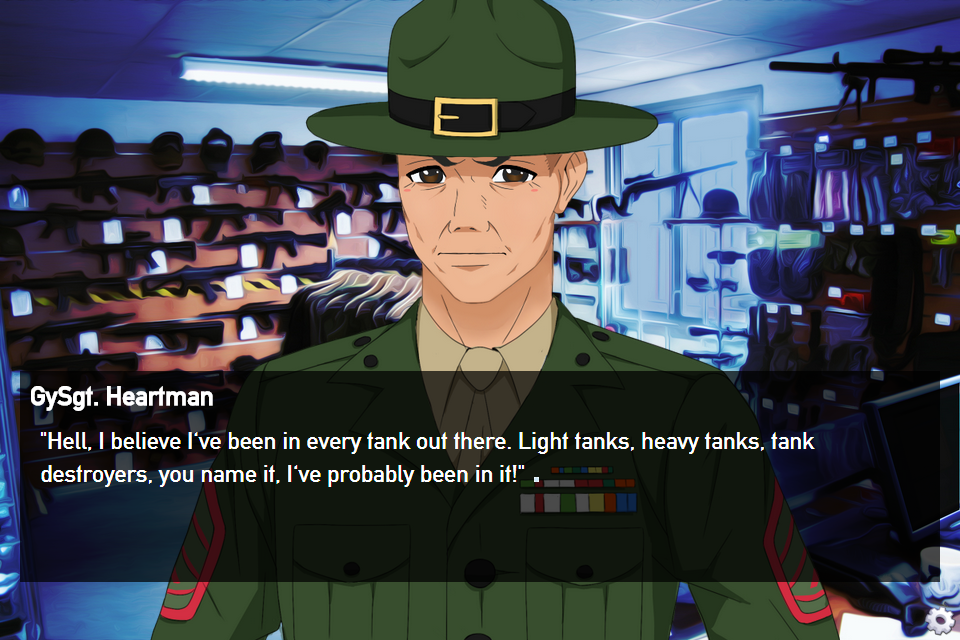 Anyway, P:TDS is an all ages visual novel by DEVGRU-P, a western indie team. The protagonist, Erwin Lemmor, totally unrelated to this guy, winds up in a “Tank School”. Erwin expected to study tank warfare at a military base. Instead, he ends up at a school full of tank girls. It’s like someone took Girls und Panzer, crossed it with Kantai Collection or Upotte!!, and made a dating sim. The characters and writing make Panzermadels entertaining as shit. However, looking at the art assets it was constructed from, it definitely screams “we made this with a tootphaste budget”. Still, it’s one hell of a fun bomb, despite basically being held together with duct tape.

For starters, you have your tank girls, the moe anthropomorphisms of tanks from Germany, Russia, the United States, and other countries. There are 6 of them that you can date: Germany’s Panzer IV and Tiger I, Russia’s T-34 and IS-2, America’s M4 Sherman, and Britain’s TOG II. Other tank girls are present as supporting characters. Last, but definitely not least, you have Gunnery Sergeant Heartmann, your obligatory brutal drill sergeant character who threatens to “skull-fuck” Erwin just a little too often. He yells a whole fucking lot, mostly at Erwin. The Gunny also has a soft spot for the tank girls. That isn’t creepy at all! Overall, the characters end up being better than paint-by-tropes copouts, and the dialogue brings the best out of them. 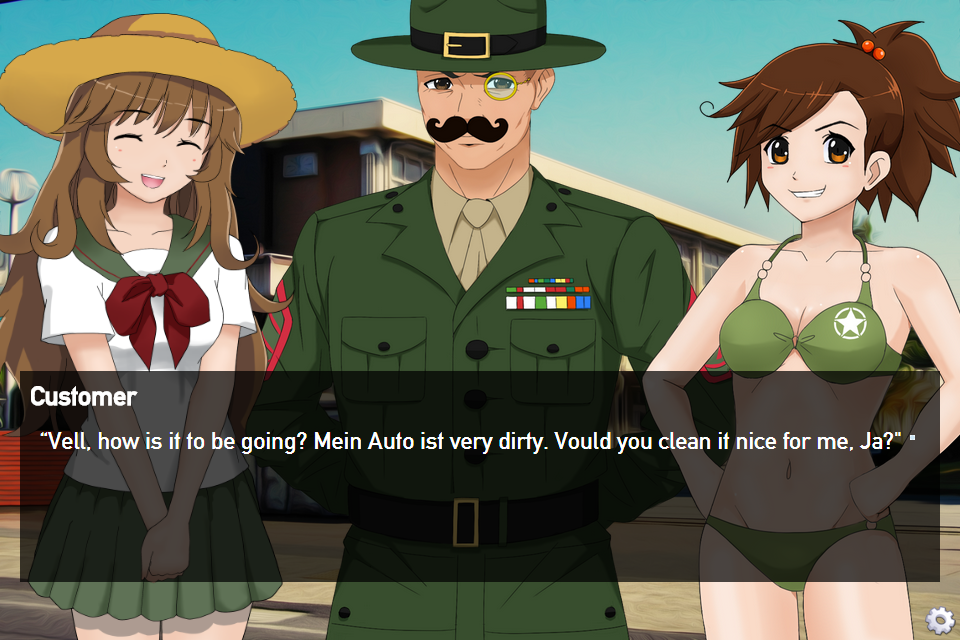 The story of P:TDS is basically standard Japanese school slice-of-life. You have your classes, school festival, class trip, and the usual time outside of school for hanging out with the girls. Except it’s with tank girls and a loud gunnery sergeant, and all the awesome shit that comes with them. Erwin can’t catch a break from getting into awkward or miserable situations. There’s not even a truly happy ending no matter what you do. While this sounds inherently disappointing, Erwin Rommel was given the choice between execution and suicide by a cyanide capsule. Our protagonist Erwin Lemmor gets dealt a different, yet still shitty hand as well. Just think of his folly as your Schadenfreude here.

If there’s anywhere that Panzermadels shines, it’s definitely the writing. The characters and their personalities make for hilarious twists on the school slice-of-life formula, and Gunnery Sergeant Heartmann is a fucking riot. There’s military humor, obligatory tank puns, a tasteful amount of references, and jokes related to the tanks’ strengths, flaws, and national origins. However, they could’ve used a proofreader, because there are typos out the ass, in addition to lots of missing punctuation. Fortunately, this doesn’t get in the way of the hilarity.

Panzermadels‘ art is nothing to write home about. At least the characters have enough detail, and look cute. They could use another level or two of detail to be on par with the better looking OELVNs released in the past few years. Most or all of the backgrounds are just photos with some kind of filter on them, and maybe a little bit of editing on signs and stuff. When you look at certain details, especially plants, they just stick out like a sore thumb and look really bad. They could’ve put more of their budget into this stuff… go rob your rich granny and make a goddamn good game next time. 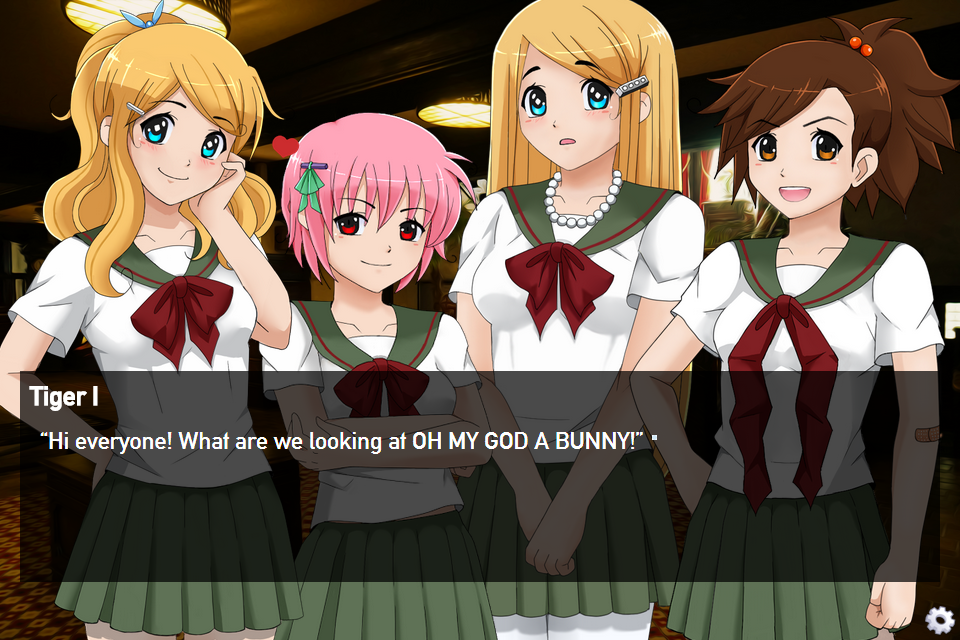 The soundtrack in Panzermadels consists mostly of stock music from Incompetech and Tandess. None of it sounds bad, and the songs fit most situations just fine. The sound effects are appropriate too, but they’re inconsistent in volume, so some are too loud, and others are too quiet. It was still a relief though, since the last visual novel I reviewed ended up having no sound effects at all. Overall, I’m not impressed.

Functionally, P:TDS is held together by duct tape. It was made in Tyrano Builder, which is a relatively new framework for visual novels. I don’t know how much control the developers have over the menus and interface, but the whole thing is super barebones. There’s no text backlog or rewind feature, and other options are definitely lacking. The EXE is also 724 MB and takes fucking forever to open. What gives?

But then… I noticed another thing very close to the end. When I asked out one of the Russian tanks on the final date, the game proceeded as if I’d chosen M4 Sherman. What the actual fuck? Is this a bug or something? A joke I’m missing about Russian tanks? I tried it a few times, and I still don’t fucking get why it broke. I tried searching to see if other players had the same problem. There was nothing on this bug, and others have been able to get T-34’s and IS-2’s endings just fine. And yet, neither of them were working for me, for whatever reason. Do I need to click the red commie flag on the main menu to go into “Soviet Mode” before taking one of the Russian tanks on the big date at the end? No, really, I’m confused here. 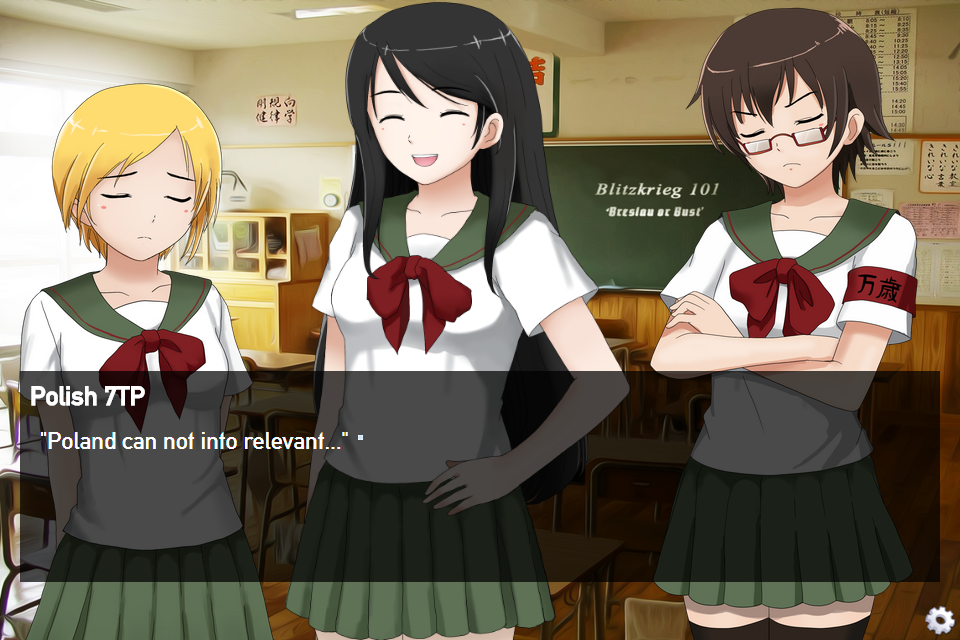 In P:TDS, Erwin can date one of six different tank girls, and each playthrough will clock in at under 2 1/2 hours. That might seem like a lot, but I heard the same lines from different girls too often. These cases of “same shit, different girl” made some of my choices feel inconsequential. If memory serves, Panzer IV says the same exact lines as M4 Sherman does in the scene in the screenshot above. I can’t confirm the same for T-34 and IS-2, because of the previously mentioned glitch. Upon getting a girl’s ending, you unlock her CG in the gallery.  Yes, that’s right. Each tank has only 1 CG, and there are none to collect at different points in the story. This is a wasted opportunity, because there are some scenes that would make really great CGs.

Panzermadels only truly excels in one place: the writing. While they definitely skimped on everything else, you’ll enjoy reading through it. It’s only 5 bucks, so you won’t feel buyer’s remorse. Grab yourself a copy, laugh, and enjoy it for what it is. You’ll get your money’s worth long before you’ve dated all 6 tank girls, so what the hell do you have to lose? Blow another hole in Sybilla’s head below to buy P:TDS at Nutaku!!