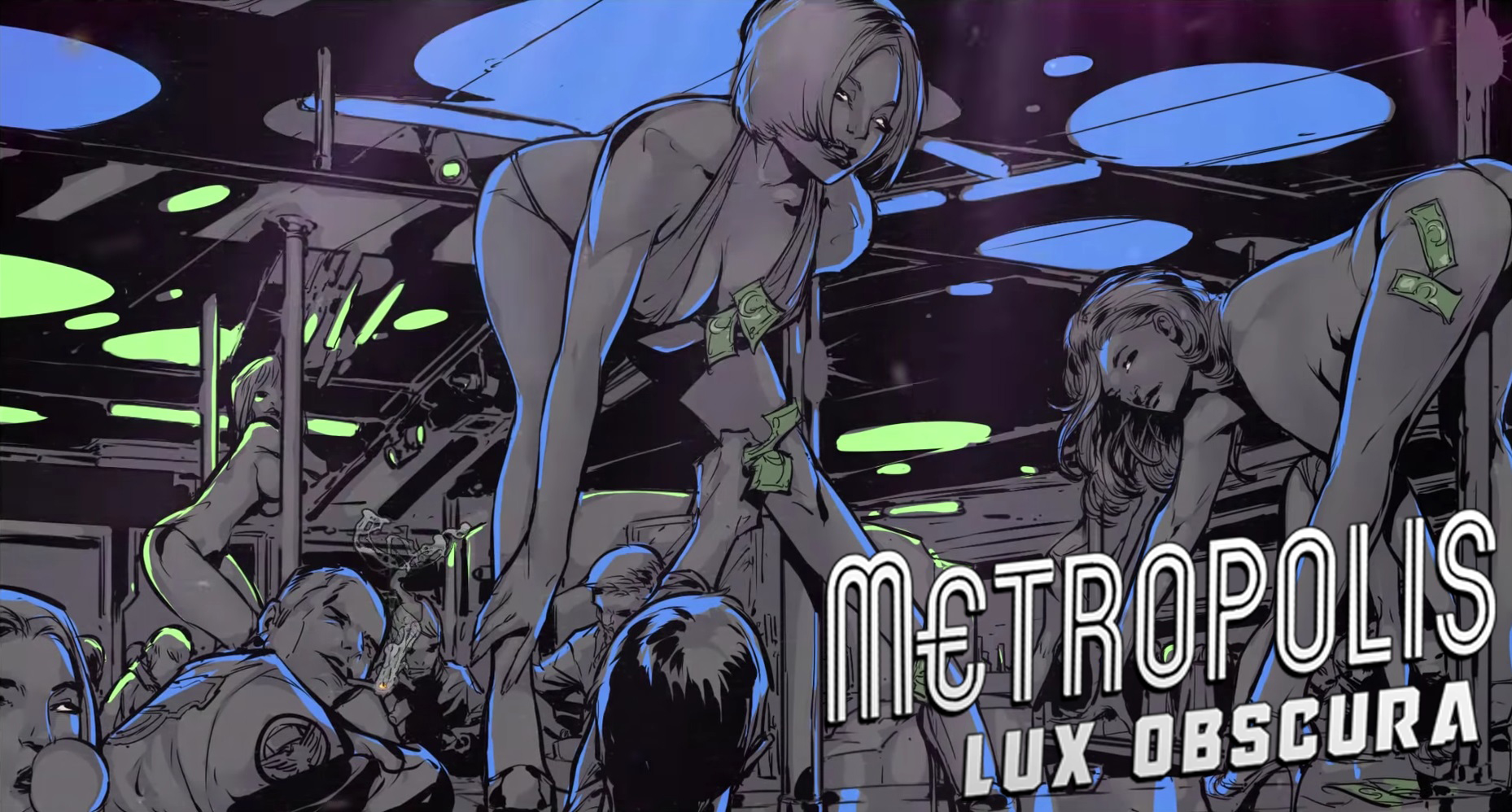 A visual novel in the style of “film noir”. This game is a grim dark crime story bustling with sexy whores, corrupt officials, crack heads, and other human scum. It’s a cynical artistic vision of life in a modern urban city.

You are Jon Lockhart. He’s a grim, serious man, finally got out of prison, after doing time for a murder he never committed. He returns to a shithole called Metropolis. Jon is hell-bent on catching the person who framed him as a killer. But with the key witness dead, Jon’s investigations are cockblocked. He wants to prove his innocence, willing to crack every skull for the truth.

Metropolis Lux Obscura doesn’t pull punches. Everyone in the game is miserable, drug addicted, habitually committing crimes. The dialogue can be corny, everything else is deliciously depressing. Is Hulu Available in India, There’s nothing remotely happy about the scenario. Even the endings were so emo, they made my dick soft. I went into the game with some expectations, but the ferocity of events still caught me off guard.

In the first act of the game, Jon works for a crime boss, to make some easy cash. He has a sucky attitude, but gets away with it ’cause he’s damn good at his job. Things start slow, but the pace quickly picks up. The choices Jon makes in the events afterwards, will determine which of the four endings he gets. Choosing to visit certain locations in a different order, will also play a part in determining the ending. 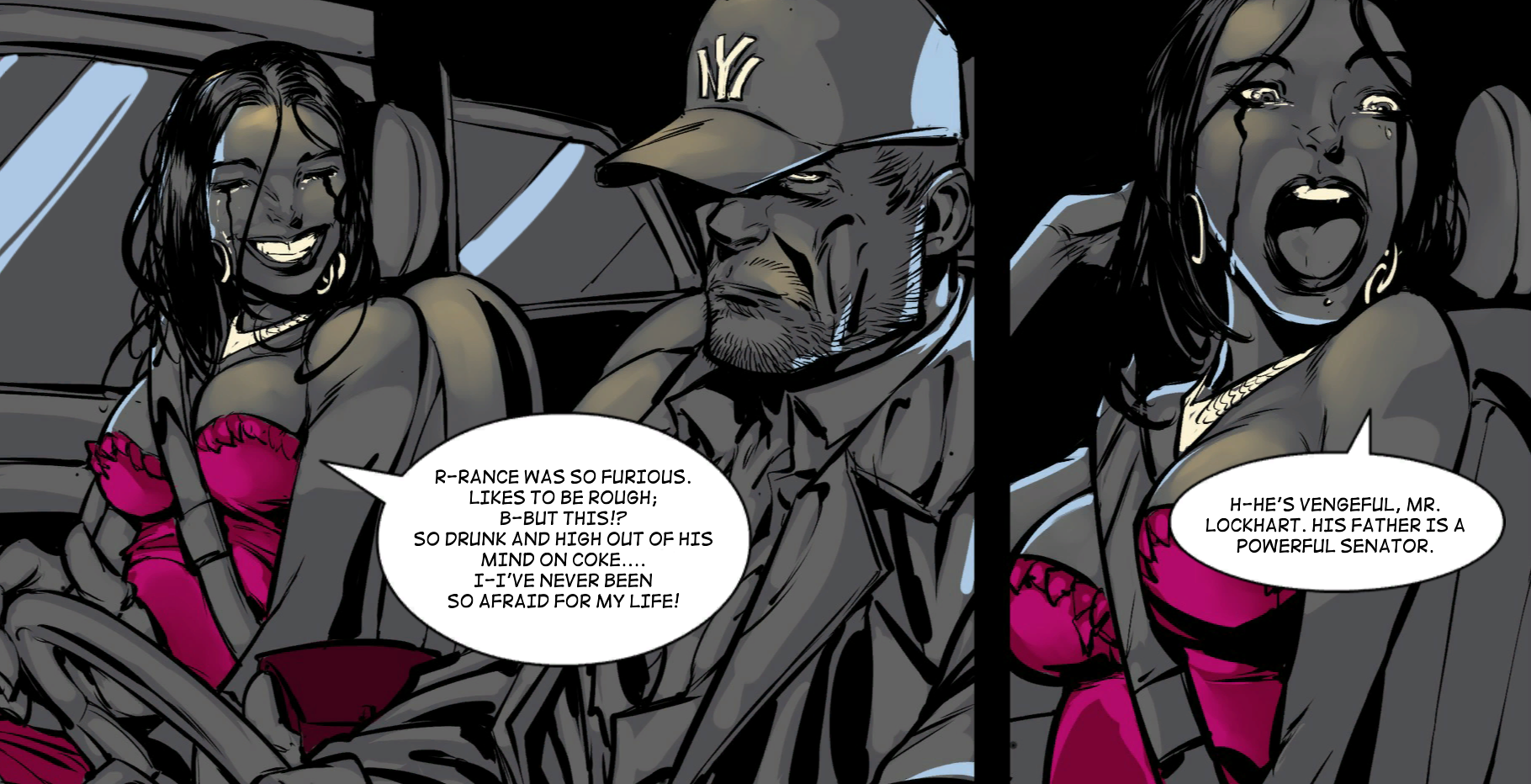 The story follows Jon as he hunts for information. His investigation is made difficult by the fact that everyone believes he was guilty. To make things worse, the person who testified against him in the trial, was his girlfriend. Yes, Jon’s life was fucked by a stripper named Goldie. He’s desperate to find Goldie, but like with Jack’s murder, he has zero leads to follow. It eventually becomes apparent that Goldie’s disappearance and the murder are mysteriously connected.

The most memorable scene in the game for me, that also highlights how depressing things can get, had Jon working as a driver for a woman named Candy. She was booked for a fuck date with a senator’s son. Candy looks so gorgeous, wearing a drool-worthy red dress, with a long slit in the side. Jon asks when she’d be done, assuming this to be a quick lay. Candy replies that this wasn’t a twenty dollar blow in an alley, but a long, luxurious night with a high-class client. Later on, Jon hears gunshots.

Jon drives Candy to a safe place. She breaks down, her makeup is smudged, her hair ruined, and her clothes are in tatters. She says she hadn’t meant to shoot him, that she knew the senator’s son liked it rough. But the guy had never been high on drugs to the point where she feared for her life. And then Candy starts crying even harder, because killing the man was equal to signing the death warrant for her, and her daughter. She’s drawn the ire of a powerful man.

Despite Jon’s terrible circumstances, I struggled to pity him. He isn’t morally bankrupt, but as we find out, his situation was partially his own doing. He constantly antagonizes people for no reason, makes enemies, even slept with his friend’s girlfriend. He didn’t deserve to get framed for murder, but he was taking retarded risks.

To put his life into perspective, only one person welcomed him back from prison. In one of the bad endings, Jon gets sentenced to the electric chair, and only three people see him off. Two of them hate his guts, they grin fiendishly as the electric current fries his brain. 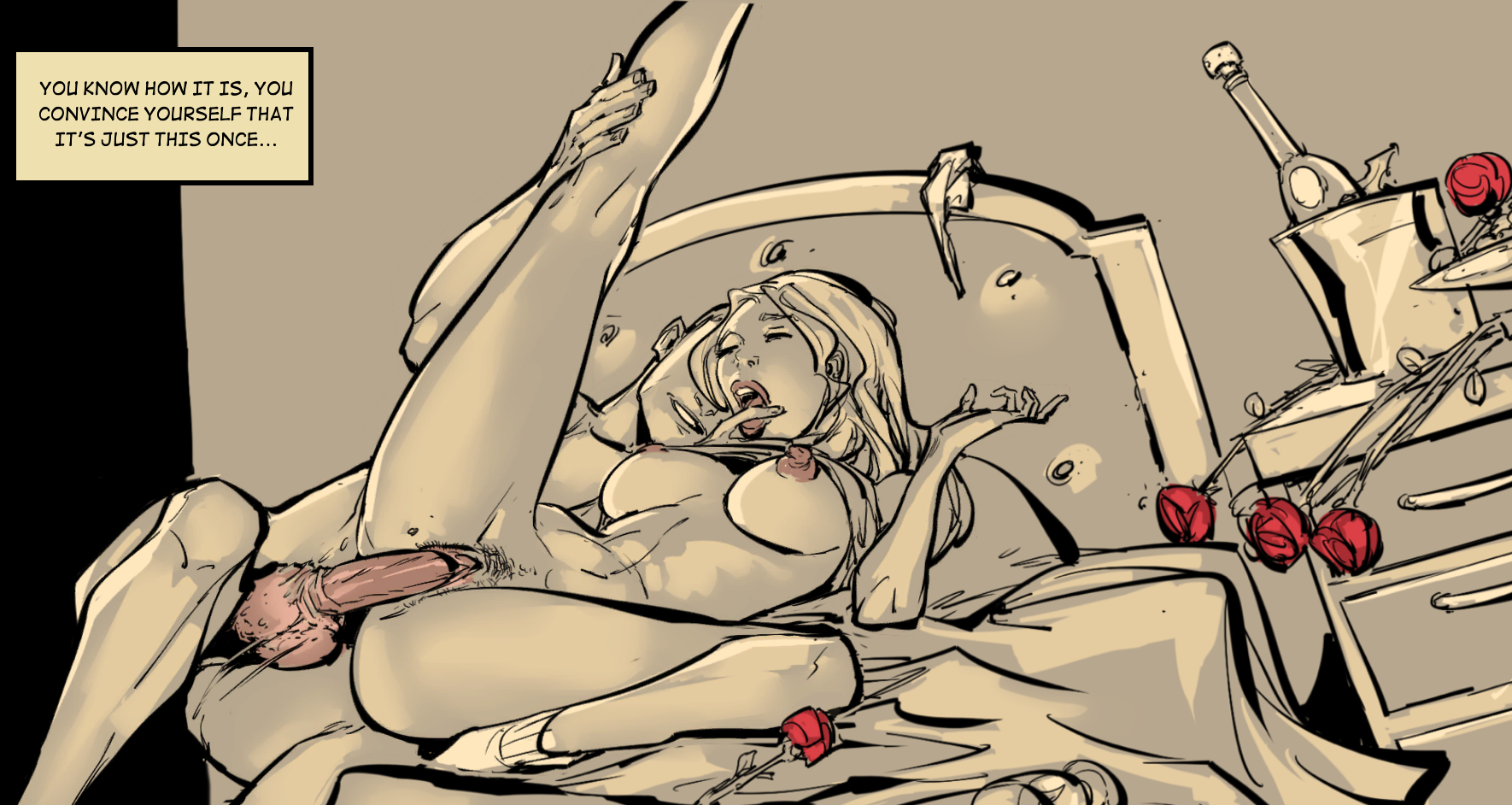 The art of Metropolis Lux Obscura is uniquely gorgeous. Characters and backgrounds are drawn to make things feel hard: everything is drawn in thick dark lines, and sharp angles. There’s barely anything looking blurry. Those effects are reserved for reflections, lights, objects in the distance. The art style also makes characters look realistic. Men are bulky and thick, with visible facial, and body hair, while women are seductive, feline creatures, with curves to die for. To my eyes, the women just look gorgeous, while the men are damn ugly. The main character Jon sometimes looks like a wrinkled prune.

The color palette is limited, but suitable for the game’s “noir”-style. Almost everything is painted a depressing shade of grey. Other colors are used to make background objects pop, like neon signs, women’s dresses, or Jon’s flashbacks to happier days. The only other time you see color, is when you’re matching tiles in the combat mini-game.

The shadows emphasize objects in a panel, and they can change the mood of a scene. In sex scenes, the shadows lick the bodies, setting a sultry mood. In the ‘game over’ image, the shadows center on Jon’s bleeding corpse, creating the effect of him dying alone under a single streetlamp. The art is consistent, clearly drawn by the same artist from beginning to end.

Metropolis Lux Obscura’s soundtrack is a mix of jazz and rock. The opening song gives you a taste, with some mysterious moody jazz. The smooth whine of a saxophone, mixed with pianos and string ensembles, promise that you’re in for a ride through secrets, betrayals, and delicious dick-in-pussy action.

During more intense scenes, you get a harsher track to get your blood pumping. This track is jazzy too, but puts more emphasis on drums, and cellos. Even an electric guitar joins the fun. It’s not all jazz and rock though, as some scenes have their own snazzy tracks. An upbeat electric guitar plays during a scene retelling of Jon’s sexcapades. The number of tracks is small, and I wish there were more, because multiple playthroughs can make the music feel repetitive.

The voice actors sound like they’re talking to each other, instead of reading from a paper, which is good. Events of the story are narrated by Jon.

The sound effects are minimal, but effective. You can hear effects like the soft drip of raindrops, the clang of metal pipes, when Jon is under attack. Most sound effects of the game only play during the puzzle game sequences. For example, matching electric box tiles produces the sound of crackling electricity. When you move fist-tiles, the action is accompanied by Jon’s grunting. Gun-tiles prompt gunshot sounds.

The game is like a visual novel, but not exactly. Instead of static images, and a block of text at the bottom, you get comic panels and speech bubbles. The comic panels fade in and out as the pages turn. Gameplay includes clicking on locations you want to visit, choosing dialogue options to take the story into different directions. The puzzle games are prompted in fight scenes.

At the beginning, the puzzle fights can be hard. Things get easier, the more practice you get. You match three or more tiles, to deal damage, to heal, etc. At the end of each fight, Jon can choose from a selection of power-ups for the next battle. 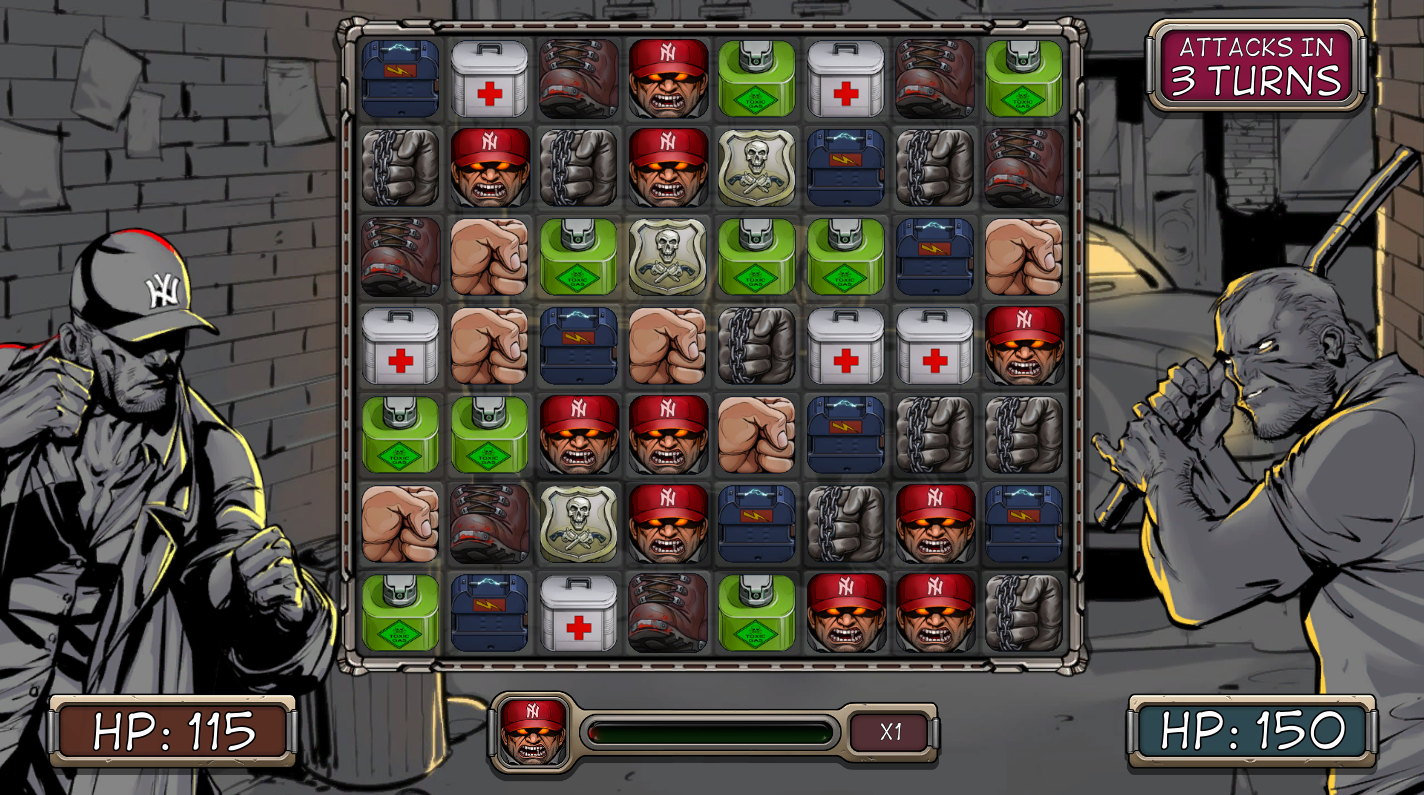 Enemies always have more health. You can “attack” a couple turns before they start hitting back. You can deal more damage by matching five tiles instead of just three. Building up the multiplier bar through matching anger tiles, can also boost your attacks. The aim is to dish out more damage than you’re getting.

The sex scenes each last two minutes tops. Some scenes have narration, but it’s mainly Jon’s inner thoughts as he reflects on the quality of her lay’s vagina. His narration is loud, and overshadows the sounds of his fuckbuddy moaning. The sound levels of the women can be low. 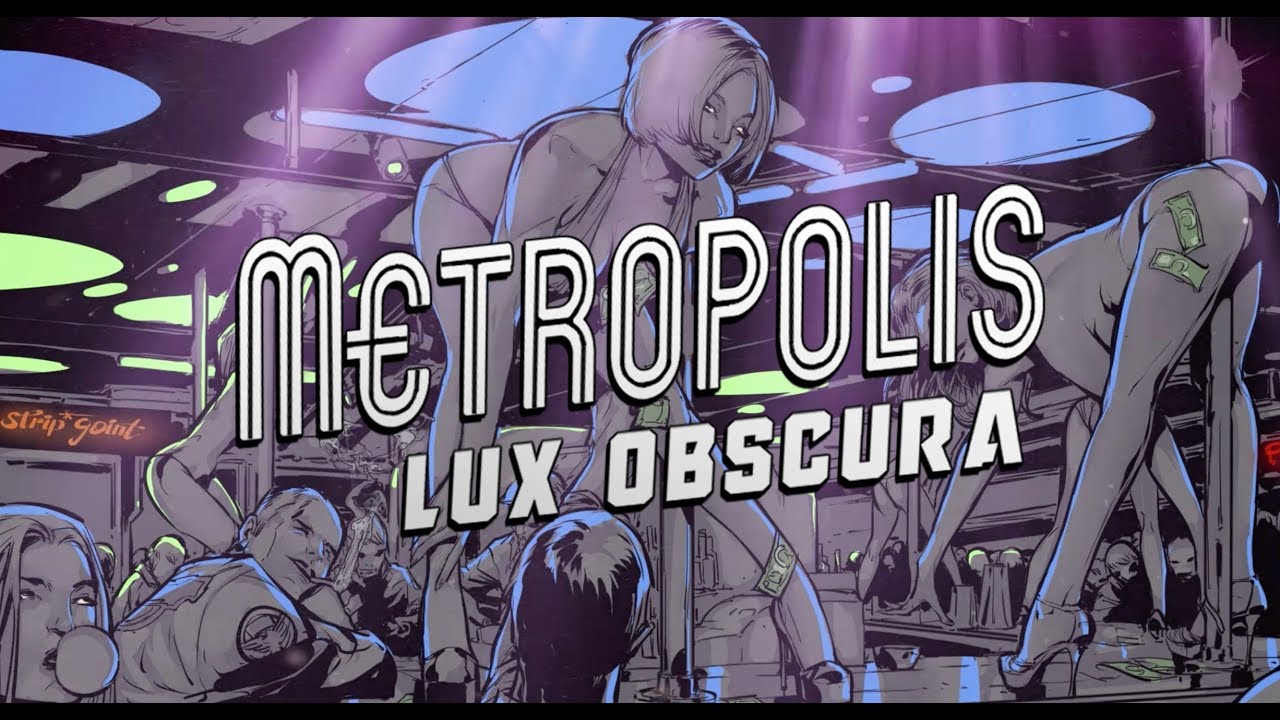 Metropolis Lux Obscura is a dark, atmospheric game with some great plot twists. Everything from the art, to the tropes, to the characters, are a highly welcome change of pace from the anime fap fodder on the market. Download this game today.