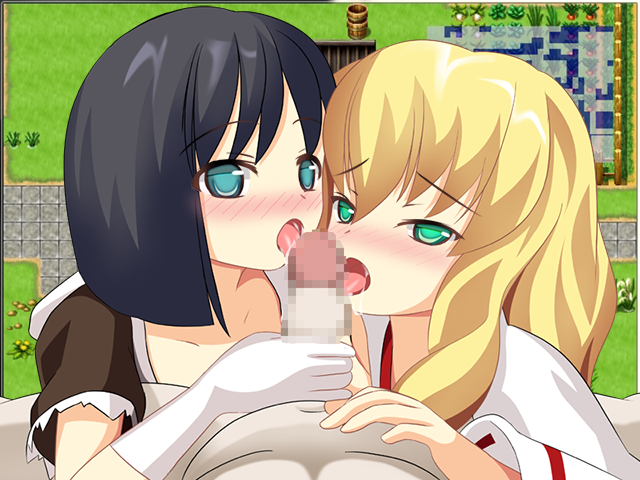 Ecchi Mery explores a plethora of sexual fetishes through varied pornographic scenes and events. The two main heroines are voiced during all of the sex scenes, and that in turn makes up for the mediocre character art in spades. You can expect about 10 hours worth of slightly boner inducing fun out of it.

“Ecchi Mery and the Perils of the Cosmic Shrine” has a simple plot full of sexual humor. Ecchi Mery starts off with a scene of Mery getting raped. It soon turns out the sequence was just a dream. Mery is awakened by her maidservant Mary. Through a brief exposition between the girls, we learn of Mery’s noble European origins and her quest to seek out an “item of value” as a rite of passage for the magic academy she’s enrolled in. The voluptuous Mary acts as Mery’s bodyguard on their merry way to the country of Cipangu, (Japan, as was known to the Portuguese in the 13th century) where said item is supposed to be located.

From there, the ladies get into a series of trials and tribulations that, among many things, lead them to getting raped time after time. Virtually any kind of plot, and gameplay progression involves some form of sexual activity. Want to become a shrine maiden? Make sure the priest gives you a good “purifying ritual” in the pussy. Want to get inside this large guarded mansion? Better drop the guard’s pants and suck the entrance permit out. You even get boned by an ancient lake demon to learn a set of helpful spells.

The game’s turn-based RPG system is bare-bones basic, with a few curve balls thrown in, in an attempt at making it more interesting. All combat is done by engaging baddies visible on the map screen and then simply taking turns using basic attacks, spells, items and other skills until the opponent drops dead.

Unlike most RPGs, defeating standard monsters encountered on almost all of the Cosmic Shrine’s thirty floors, don’t yield any experience points. If you plan to level up and gain more power, you will have to defeat a boss found on every tenth floor of the dungeon, or take part in a specific event that will reward you with stat allocation points. Speaking of those stat points, Ecchi Mery gives the player complete freedom in what way they want to develop Mery and Mary. Even after assigning points at the Buddha statue located in Hinaya Village, you have the option to switch all of them around to your satisfaction. This may sound like great modern game design in your ear, and it would be, in any other game. There are very few viable builds that will get you through the game’s dungeon monsters, and even fewer to help you survive the imbalanced bosses. All the enemies I couldn’t avoid, dropped like flies to two hits tops, when I allocated Mery’s stat points into magic attack, and Mary’s on physical attack. The only thing that slowed my progress were the bosses, defeating which generally requires luck more often than strategy.

When you’re not trying to dig deeper into the Cosmic Shrine, or trying to trigger events to progress the story, you grind enemies for items. These items can be synthesized at a special village shop into more powerful equipment. As the monsters don’t even drop any gold, I felt little incentive to keep fighting them after I collected all the crafting material I needed. Being the curious, thorough type of player, I still put in an hour to just collect item drops in the hopes of finding use for them later on. Since most enemy drops turned out to be foodstuff, my whole inventory quickly became a venerable farmer’s market full of fruit, vegetables, and the occasional Japanese rice ball.

Due to the dungeon monsters not dropping any cash, or anything of monetary value for the village shop keepers, the only other way of earning money was looting chests strewn about Hinaya and the Cosmic Shrine. Prostitution is also an option! But to my dismay, the brothel segments weren’t numerous. You earn 500 coins for each customer you sexually satisfy, but with little variety in scenes, the act of whoring out my heroines lost its appeal quickly.

The fact that the default RPGMaker character portraits look better than what Anagura’s artists put into the game, is a bad sign. The artwork on both Mery and Mary is very low in detail and the body proportions in many of the HCGs look off. The characters have a very youthful appearance, which can be appealing to some fappers, but to anybody with some standards, this is setting the bar low. The game’s art direction felt very amateurish to me. Also, all of the genital areas are censored, even though it’s the localized western release. We don’t censor our porn here.

Ecchi Mery contains stock music, and it’s unapologetic in making you experience it over and over again. There is very little variety in tracks. The music can get grating extremely fast over prolonged gameplay sessions. It’s not bad enough to deserve a complete mute, but it’s also not good enough to draw much enjoyment out of. Overall, it’s one of the game aspects that I wish the developers thought about before release.

The game uses stock sound effects found in many RPG Maker titles old and new. The sounds aren’t a terrible match with all the action, both sexual and other. The effects provide a nice balancing force to the game’s uninspired stock music.