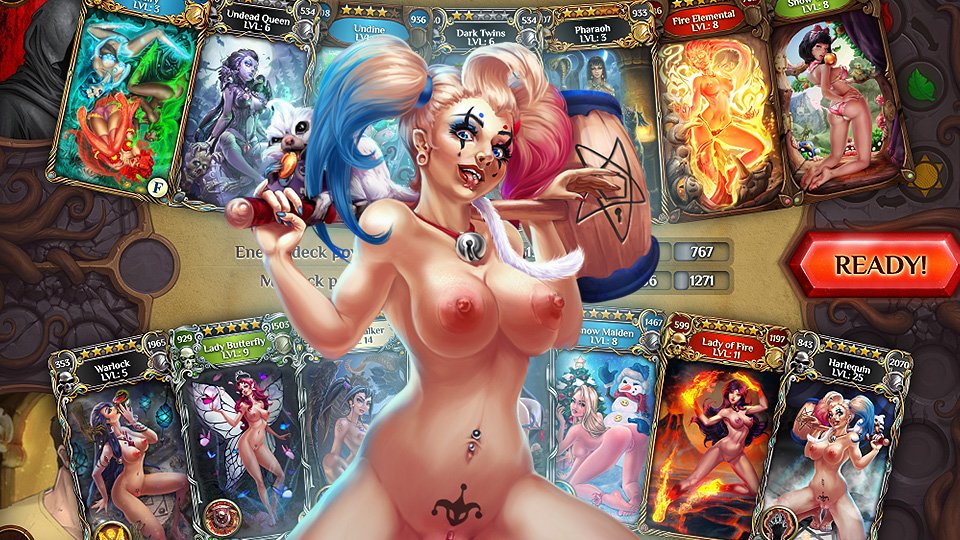 You’re a wanna-be alpha male running your mouth at a strip club. You hunt down a stripper for a romp when a dark witch appears from another dimension. She drags you and the girl through a portal into a magical world. In this world, filthy bitches run wild and need to be tamed by your cock.

After fucking a variety of sexy women, you get cursed. You are slowly turning into some ugly werewolf motherfucker. You team up with the flying pig to reverse the curse.

Smutstone’s male protagonist is one hilarious son of a bitch. He never met a pussy he didn’t want to fuck. He has a crazy sense of humor, making h-scenes entertaining and funny. Along with the flying pig, this guy is the only constant character in the game; the rest come and go, never to return. We don’t learn much about the mysterious toxic male and his magic penis. His personality achieves Homer Simpson levels of stupidity; he’s nothing more than the embodiment of unrestrained primal impulses. Meanwhile, the flying pig’s main reason for existence is to deliver exposition. In short, this story slurps ass juice from a Thai prostitute’s colon.

Smutstone is a card battle game. As of time of writing, you can enslave 101 bitches of varying cup sizes. Each slut is a card with hit points and attack points. After pressing “fight”, the card battle plays out without further interaction required from the player. The battle lasts until one side has no cards left.

Once you’ve defeated an enemy, you get a short comic-style cut scene. Your guy fucks the girl, whether she likes it or not! While the battle gameplay is automated, you have to spend special care managing your deck. Cards have special abilities, such as respawning, and freezing spells.

You can have a total of three decks. However, because the cards level up somewhat slowly, you will quickly default to using just one deck comprised of your most powerful cards.

Smutstone has tons of grinding. Once you’ve beaten all the bosses of the first map, you resume your adventure on a new map. Here, the difficulty spikes. If you lose battles, you’ll quickly find yourself losing more resources than you gain. You have to heavily improve your girls’ stats if you want to proceed.

The game has a stamina system. You only have 100 battle points to spend in a session. You recover your battle points by winning matches, and they replenish slowly outside of battles. The rate of recovery is 2 minutes per point, with 15 points needed per battle. You replenish all your points in 3 hours, 20 minutes.

The game is designed to be a slowly progressing grind that tries the player’s patience. You spend weeks playing to accumulate the resources for upgrades that let you progress. You get a free card pack every day, which comes with duplicates of the same cards. You spend these duplicates alongside gold to upgrade a card’s levels. But each monster bitch has an insane level-up cost. If you don’t want to spend the fiat currency from your dead-end low-wage job, you’re in for weeks of grinding.

Smutstone has a lot of content to explore, like daily challenges where you complete quests to unlock more cards, or equipment. Like everything else in the game, the challenges are subjected to long cooldown periods. There is also tournament mode, in which winning grants you level-ups and free cards.

Smutstone’s artwork is very clean and detailed. The art during cut scenes isn’t what I’d call beautiful, but it has a distinct style that surely has its audience. The content looks hand drawn, with realistic body proportions.

The highlight of the game is the card artwork. Each card is beautifully detailed with advanced shading and coloring technique. The girls in the cards are very, very hot. You got girls of every skin color and body type, like it’s a multicultural ghetto in the grips of a race war. Each card has such detailed backgrounds and intricate clothing, you’re almost struggling to make sense of things.

Each card evolves as you level them up. The girl in the card loses a piece of clothing on each level-up, until she’s completely naked. Meanwhile, the interface artwork is pure eye candy.

Smutstone has no voice acting or sound effects.

You get a free pack of common cards every four hours. The premium “gold box” card packs cost 100 red gems, which you gain very slowly in normal play. The fiat currency cost of gold boxes is about 10 dollars. You get bonus gems for purchasing more at once. If you’re planning to make a purchase to support the developer, you’re advised to budget over $50 to reduce the unit cost of cards.

You unlock the story in segments. After conquering a new boss, you see more adventures of the son of a bitch and his flying pig. These comic-style story segments feature pointless violence and emotionally dead sex that borderlines rape. The sex scenes are short, lasting one or two pages each. You can replay the story whenever.

Smutstone’s unusual sexual humor is its strong point. For example, our toxic male hero uses giant tweezers to pluck the fangs of a vampire girl before ravaging her cunt as sore as her mouth. He ties up elemental girls who resist and takes them despite protests. This guy is the most uncucked male heapiece of shit ever.

From what I can tell this game could be fun and probably a lot more people would play if it were more balanced.  The only way to get cards and progress is to spend money, which is fine I get it you need to make money.  However the cost is so ridiculous.  For the cost of one promo pack you could purchase almost any other game on any game system and play and use all the features for the rest of your life!  In this game it may get you one or 2 tournament wins and that is just a fraction of what it would take to continue to progress and collect cards.  If your not winning tournaments you’ll never advance. I just think more people would play and ultimately the game developers would make more money if the pricing were more balanced. What if you could play and never win a tournament and you spent money to simply continue through the levels?  I would play if I could spend a reasonable amount of money to move through the game.  Here’s another idea? Why not make it more fun for low cost users who grind so they can still advance but allow sell ad space to generate revenue to offset free users.  Bottom line it’s just a money pit the way it is designed at the moment.  Don’t even think twice about playing just save yourself a tone of time and money and just walk away now.

Good summary of your user experience. Yeah, not many companies treat their F2P model like Hearthstone. Many opt for more extreme bottom-feeding strategies.