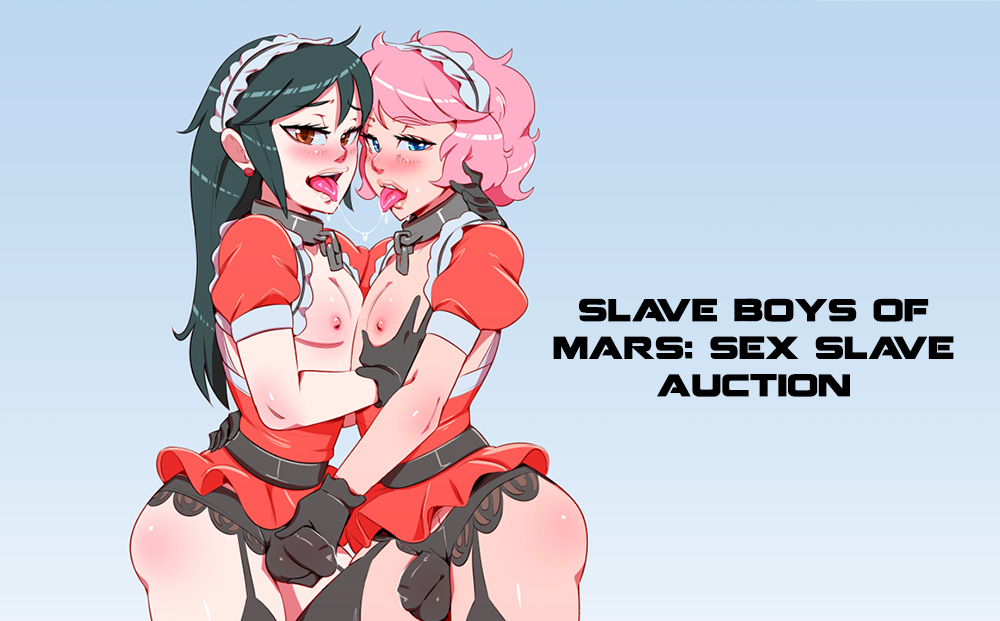 Support my writing at www.hentai-onahole.moe

The slave auction was a spectacle. The number of men attending today’s auction was staggering, there was no way aside from closing one’s eyes to avoid scenes of maids getting face-fucked with red, veined dicks. The elite prostitutes of Mars were a commodity in high demand, low in supply, yet each boy was treated like a disposable one-use sextoy rather than a rare gem.

Sally tried walking slower, to slow his heartbeat and blood pressure, which amplified the effect of his nano prostate vibrators. The tiny mechanical stimulators were injected anally into his prostate gland during his training. They were a permanent part of his life. They made sure he never had control over his desires.

There was easily twenty customers for each maid in the room. The guys who already shot their first loads were getting visibly thirsty, Sally could tell from watching their agitated expressions and restless body language. It was not an option for a slave to deny service, as much as Sally wanted to run back to the kitchen.

The last look Sally had taken of himself while powdering his face in the makeup room was vivid in his mind. The staggering layer of makeup on his face and eyes was extravagant tonight, practically making his face similar to a doll’s. His erect pink nipples were bared by his uniform, his miniskirt not even long enough to cover his loins, no doubt inviting for horny customers who weren’t getting satisfactory attention from other maids. It was virtually guaranteed that the longer he lingered in this hall full of sexual activity, someone would eventually approach him. If only he was an ugly slob, no-one would pay attention to his refined hourglass frame, and soft bubbly butt barely contained with his one size too small panties digging into his crack. He practically felt on his skin the dicks getting hard with every step he took forward.

He could hear scattered pieces of conversations, comments about the maids’ bodies and sexual abilities. Abrupt bursts of laughter rang in the hall as customers cracked crude jokes in between face-fucking the slaves. Not a minute passed that a man wasn’t growling like a beast while unloading the contents of his balls on the powdered face of a maid-turned-whore.

On the walls of the great hall, several videos played on television screens. They were recordings of past slave auctions, showing off the maids having sex with different patrons. Sally had attended the previous auction, but nobody had bought him after the event. A video of him sucking several huge dicks was playing. He could see several guys on the sidelines jerking off at it. But his role today was simply to serve alcoholic drinks from the tray he was carrying. It was a demotion he welcomed, for he valued his life despite the misery of it.

Many of Sally’s friends had returned in body bags. After only some months since they were bought, the customers had returned the boys, in pieces. The black bags had been delivered through the front door, practically paraded in front of the prevailing maids. There were no burials, and no-one aside from the mansion’s master and his inner circle knew what was done with the bodies.

Sally lived his life in the moment, anxious of the future where nothing awaited him but certain death. As long as he had the strength to suck a dick, he was useful to his employer. As long as he was young, pretty, and useful, he was allowed to keep on living out his days in the mansion.

Getting bought was a slave maid’s best bet at escaping the mansion. There was no guarantee that their new owner was any better than their current, but there was always a chance. Dying in service was a reality for many. Many wealthy clients barely cared about retaining the health of individual sex partners when they could buy boys in bulk.

Sally jolted, almost letting out a scream. A coarse hand had suddenly grabbed his ass. The man held a pound of his ass fat in his palm, massaging hungrily. The hand was quickly accompanied by a hotly throbbing dick, placed firmly between his ass cheeks. Their skins were barely separated by the thin fabric of his panties. This dick was certain to wriggle its way inside of him, it had the determination.

Sally had stopped on his tracks, trying desperately to keep his balance, and his gasps from escaping his lips. He was fighting to not drop his tray full of drinks. He had to give into the man molesting him from behind, he couldn’t run.

The man breathed hot air into his ear, saying not one word while massaging his ass, and the naked parts of his chest.

Sally’s mouth was dick-free in that moment, but watching the video of himself on the screen, the memory returned with all the associated sensations. Everywhere he watched in the room, he saw boys sucking dicks, giving handjobs, taking facials. The riveting stench of sex was everywhere.

The naked customer groping him from behind pulled down his panties, and shoved his eager cock between his balls. The man grabbed his hips firmly, grinding against his legs, like fucking a pussy. He was a strong, meat-eating man in his late thirties with big, coarse palms. His strained biceps contrasted with Sally’s stick-like, bony arms. The boy slave had barely any physical strength due to three factors: He was only given leftovers to eat each day, not a single full meal. He lacked opportunities for physical exercise. Extreme hormone therapies had done the rest.

Every dick that wasn’t getting sucked by a maid was being stroked by its owner. Crowds of men were standing around, jerking off, waiting for their turn that never seemed to arrive. They watched the videos on the walls, looking around impatiently for new maids to stick their dicks in. They saw Sally, groped like a whore, putting up no fight at all. It was all the invitation they needed.

“Hey, babe. That you on the video?”, a man asked with a sneering voice. He flicked his neck towards the television.

Before Sally could even answer, the man behind him jabbed him in the neck. He jolted from the sudden pain, he went limp for just a second. When his senses returned, he found himself on his knees, on the floor, a dozen erect cocks on his eye level. Their owners were grinding their foreskins back and forth, their tips oozing from previous ejaculations. The boy who had eaten those loads was right next to them, only a few meters away, still gagging on multiple dicks being thrust into his mouth at once. Sally could hear his sloppy, ragged breath from the cacophony of slurping.

The man behind Sally sandwiched his dick between his ass cheeks. From all the hormone therapies, his ass was a big, round, soft piece of meat. The man sausage was hot and slippery against the cavity of his ass. At any given moment, he could just thrust it inside.

The position was humiliating. Everyone could see him bent over, like a dog in heat. His frilly mini skirt was rolled over to his hips, and his butt was completely exposed. He heard a jeering whistle slicing through the air. He looked up at the men in front of him, all staring down, like hungry wolves eyeing their prey.

“Hands off the merchandise”, a man’s voice bellowed.

Sally walked silently up to the boy maid, and knelt down as the men watched with curiosity. None made a move on him, as he was not the merchandise. These guys were regulars, they knew the rules.

Sally’s button-sized earphone gave a light jingle, and the sound of his master rang in his ear. His orders were:

“Stay at the slave’s side with your mouth open.”

His powder and rouge was all messed up. Mascara was running down his teary cheeks. He had stopped counting the number of men after the customer who face-fucked him for five minutes straight. It wasn’t supposed to go that way, but the guy had apparently found him particularly cute, and wanted to leave his thanks in his belly. Sally still tasted his musky man juice in his mouth, and felt the sticky remnants in his throat, like a gooey layer of honey.

Molly’s cum-lazed body was covered in paper. The bills were on his face, his long green hair, they were sticking to his stomach and tit crack, held together by lumps of sticky cock juice. Every customer who came to fuck him threw their money at him before ramming it in.

Like every man before him, the customer pulled his pecker once he was satisfied. Sally shivered as the cock exited, its throbbing veins grazing against his tongue. Sally’s lips gave a sloppy plop-sound when the man was finally out of his mouth.

The situation was mundane and boring for Sally, who had been in this position countless times already. There was nothing stimulating about a bunch of guys shagging a defenseless asshole, only to release their seminal fluids in that hole prematurely. Most guys splurged their loads in less than three minutes, adding another lump into the overflowing ball of white jelly.

The electric lock around Molly’s dick had a timer on it. It was programmed to release after a set period of time. After the 90th customer had finished his fuck, suddenly, a green light lit up on the lock’s surface.

Sally’s earphone gave a jingle, and the sound of his master rang in his ear. His orders were:

“Eat him out while jerking him off. That’s an order.”

His hands were completely drenched in Molly’s seed, they made an increasingly loud, disgusting squishy noise. He jerked and he jerked, and he knew he had to do it. He lowered his head and stuck out his tongue. The whirlpool of sickly colored white-yellow semen was almost a hundred loads strong, and it was overflowing. He had to clean all that up before his shift was done.

The boy maid swirled his tongue in the overflowing butthole, lapping up as much baby cream as he could swallow in one mouthful. While he did this, Molly’s ejaculations got more explosive. The men around the pair looked in awe at the spectacle. From the corner of his eye, Sally could see them filming the action with their smartphones. They took a lot of photos, the jingles from the phones betrayed this fact.

After half an hour of licking, jerking, and getting humiliated, Molly let out a deathly sigh. Through his mouth gag, he whispered “I want to die”.

After licking clean Molly’s butthole up to the rims, his entire ass was glistening from saliva. Sally’s earphone rang. His master’s voice said: