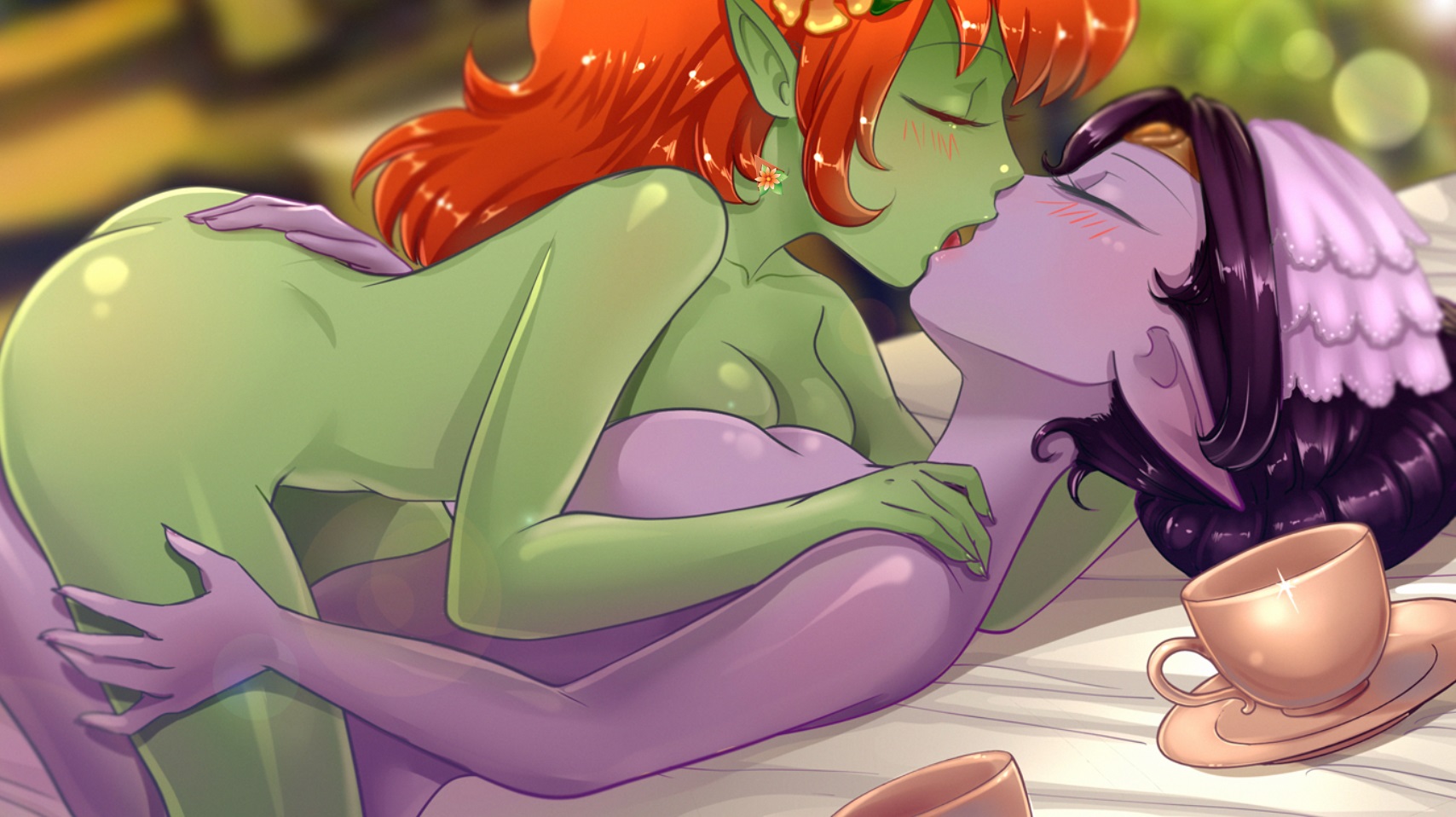 It’s the story of two lesbian forest nymphs. The tale begins with a nymph named Pumpkin roaming the forest looking for some special mushrooms. She searches for hours but the mushrooms prove ever elusive. She’s distracted by her lustful feelings towards Lady Amethyst. As nightfall approaches, Pumpkin ends her search. She decides to bring some beautiful flowers to Lady Amethyst instead.

The dialog is dull. The game dragged on for too long. The grammar is excellent, with no glaring errors.

Sweet Fantasy has solid character designs and background artwork. The art style is traditionally Japanese, with a slight touch of western influences. The girls are drawn to look sexy and plush with consistent body proportions between images. The backgrounds sell the whole forest vibe perfectly. Coloring is lively and makes for visually appealing scenes.

Both Pumpkin and Amethyst look super cute. They look delicate and soft to the touch. Their feminine bodies are sexually stimulating for the male gaze. Pumpkin in particular is shown in numerous positions that highlight her feminine proportions.

The backgrounds in this game are stunning and really set the scenes. Whether it’s the blurred out trees, or the sunflowers on the farm, you feel happy just gazing at the beauty of nature. When you see how big the trees are, you can understand why Pumpkin keeps getting lost.

Sweet fantasy is a visual novel. You click the screen to advance the story. The game has standard visual novel functions such as a ‘skip’ and ‘auto’ button for smooth play. At several moments during dialog, you make choices that make the story branch off in multiple different directions and several endings. There’s tons of save slots, and the ability to replay scenes.

Sweet Fantasy has no voice acting.

The music in Sweet Fantasy is threadbare, repetitive and not that good.

The game highlights the cute personality traits of Pumpkin and Amethyst, without glorifying their sexiest physical traits. It’s lackluster. I would’ve liked some raunchy sex scenes. Instead I got slow and passionate love making, which isn’t bad either, but left me wanting.

The emotional journey to fucking Amethyst was not very satisfying. When you finally have sex with her, the game ends.