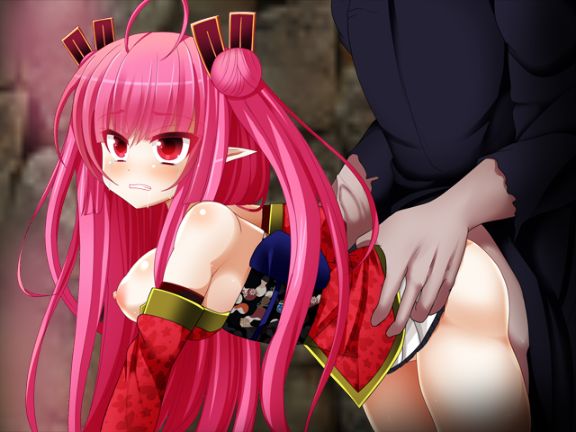 Emma is the princess of Purgatory. She’s a spoiled little brat! When her father is killed and her kingdom is taken over, she is the only person left to fight against the angelic hordes and return order to the realm of Purgatory!

Read our guide on how to download DLSite games.

Purgatory is a world between Heaven and Hell. After some imperialistic angels decide to take over, Emma is left without a home! With no other options, she is forced to begin her training and defeat the angels that have invaded Purgatory!

In the beginning, it takes a party of four to defeat a single mouse. At the end of the game, Emma alone can defeat angels and holy knights of incredible power. The end goal is visible from the start. Your castle was taken over, and you need to take it back. You spend your time roaming the world map and speaking to NPCs in town, you’ll see your castle in the distance.

The story progresses in four parts. Clear the wishing well, clear the church dungeon, find the rare medicinal herbs, and defeat the final boss. It’s not exactly Shakespeare, but the escalation of stakes and drama was well executed.

Purgatory Princess was created with the RPG Maker game engine. Use the arrow keys to move. Press Z and X to interact with the world. There is no dialogue skip function.

The game cycle is simple. Defeat enemies to earn money which you spend in town in exchange for items. Eventually you’ll be strong enough to defeat the angelic armies and complete the game.

Emma has the option of working as a waitress for spare cash. Doing so will begin a fun minigame where she must serve drinks to hungry customers. The game is supposed to have a “prostitution system”, but that is a bold faced lie. Emma can pee on people’s faces for money once a day. That is not a prostitution system!

This crafting system is bigger than the game itself. By the time you beat the game, you’ve only scratched the surface of the items you can craft. Some of them take so long to craft, and are so overpowered, it makes you wonder if the developers planned for a longer story.

The anime style art is average quality. There are 12 CG images that play across 10 sexy scenes. Character designs are simple, which allows for uniform photos of equal quality, even if none of them pop with creativity.

As Emma takes damage, her armor will break and she’ll slowly become naked. The problem is that clothing damage is tied directly to your health. Drinking a healing potion will also repair your clothing. It doesn’t make sense, and punishes you for healing yourself.

There are three outfits in the game: Naked, Princess Armor, and a maid outfit. Changing wardrobes will only change your in-game sprite.

During combat, the visual presentation is horrible. The enemy on your right side is almost always off screen and not clearly visible. Clicking to attack thin air breaks player immersion. It also looks really stupid.

Purgatory Princess has no voice acting.

Sound effects are standard RPG Maker assets. Flame blasts, sword slashes, and healing magic all have unique sounds that correspond to the ability. The sound design in this game is nothing different than any other RPG Maker title. This is not neccesarily a bad thing, but veteran RPG players are sure to feel annoyed.

There are 50 musical tracks in the game. Many of them are stock RPG Maker assets, many are unique to this developer, and a handful were created specifically for this game. If you’ve never played this developer’s games before, these tracks will sound unique and very intriguing to you. Drums and cellos create a foreboding tone that is punctuated by digitally synthesized tones and beeps that seem almost alien in nature. Truly, these tracks are well made and enjoyable to listen to.

My favorite track makes heavy us of the saxophone. That song had made remain in in the same area longer than needed, just so I could listen more of it. Not all tracks are this good, but it’s likely that you’ll find a favorite.

There are 12 CG images that play across 10 sexy scenes. Two of the ten scenes are focused on urination. Four have Emma as the main focus, and four are centered around another woman.

At first, all scenes are focused on Emma being dominated and taken advantage of. But as she grows stronger and takes control of her fate, Emma begins to give orders for her subjects to dominate other women. This switch from submissive to dominant was very interesting, and allows for players to experience the best of both worlds!