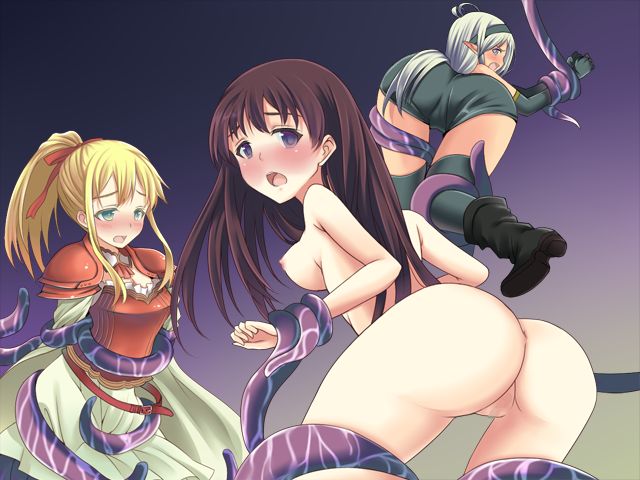 After her kingdom is invaded and her father is murdered, Princess Eris has no choice but to flee to the land of Arclight. She works hard to become strong enough to retake her throne and defeat the evil Flosein Empire!

Princess Eris was exiled from her home country of Hilbernia. She fights alongside the Arclight army to regain her throne! Little does she realize that life outside the castle is rougher and tougher than she ever knew.

If a character is forced into sex, they can never be recruited into your party. Don’t do too many side quests! It’s a tough decision between seeing a sex scene, or getting a new party member. You cannot have both.

This is never stated anywhere, meaning the vast majority of players will lose out on sex scenes or party members, and never know why. My advice is to avoid the “Four Generals” side quests so you can have all the party members.

Outside of that terrible choice in game design, the story is very simple. Rescue some maidens before they get ravaged and uncover the truth of why your country was invaded. An unknown enemy wants to mess with demons and spread anarchy. Only you can stop them.

There are four basic endings to the game, depending on how much of a whore your main character is. With a standard story, you have some predictable endings. Become a sex slave, become the queen, or something in between.

Ordeal of Princess Eris was created with the RPG Maker engine. You move with the arrow keys and press spacebar to interact with objects and people. Press ‘A’ to review dialogue. Press ‘Shift’ to skip dialogue. Press ‘W’ to hide dialogue.

You are given four choices at the beginning. The first three choices determine your stat bonuses. Will you have high attack? Or high magic power? And what is your preferred weapon? Regardless of your choices, you’ll level up and max out all stats eventually.

There are three difficulty levels: Easy, medium, and hard. Difficulty only determines how grindy the game will be.

Weapon power scales with stats and weapon skill level. Your weapon skill will rise when you repeatedly use a weapon. Your stats rise mostly via your equipment. High strength will increase sword damage. High dexterity will increase dagger damage. Choosing a weapon that matches your stats will make things easier.

JP is magic. WP is tech points. After every battle your HP will recover but your WP and JP will not. In other words, your HP recovers after every battle, but your magic needs to be replenished with items.

If an enemy’s element matches the battlefield, they will regain health after every turn. Use items and magic to change the field effect and easily beat your foes.

“Tech Sparkers” are basically “Inspiration”, a system used in many RPGs to create tense near-death situations that a player can turn around. Basically, when you fight enough battles, you will randomly unlock new abilities via tech sparkers. This feature is great, but after two hours of gameplay, it basically never happens again.

Defeating Enemies makes them all stronger next time you fight them. Meaning, if you want to grind out battles, you should vary your location. If you keep grinding in the same area, the enemies will become overpowered as hell.

There are no levels in this game. For every strike you land, your stats might rise. This leads to very gradual growth, which is more realistic than a leveling system, but it ruins the sense of progression. You don’t go from level one to level 99. You just slowly get more HP points.

The game is advertised as having a prostitution system, but after 4 hours of play, I have yet to find it. It clearly exists, since there are scenes in the recollection room, but it’s not easy to find.

The mechanics in this game take a good while to learn. Sadly, it’s more of a stressful than an immersive experience. You feel forced to use a single weapon, because you have no skill in other weapons, etc.

The game includes 29 sex scenes with over 450 images total. The vast majority of images only feature slight variations, such as a character’s eyes open or closed. The art is drawn in the Japanese anime style with soft outlines and blank expressions. Everyone looks so stiff it’s like the characters don’t experience any emotions at all.

The female bodies have realistic breasts and hip sizes, and cookie-cutter anime faces. You feel their youth from just staring at their luscious fuckable bodies. Hairs are detailed, as are the clothes and armors everyone wears.

The game map is enormous but repetitive. There are at least five different caves, each looking very similar to the other. The forest walkways are crowded with enemies, making them a slog to explore. The player is not able to walk around in town.

Clothing breaks when it takes damage. If a girl is completely naked, she automatically regains her clothing. There is no real purpose to clothing damage in this game outside of visually representing the severity of your wounded state. Special rings can be worn that will stop all clothing damage. There are no animations in this game.

Ordeal of Princess Eris has no voice acting.

The sound effects are mostly standard RPG Maker assets. You have metallic clangs for swords and crackling explosions for a fire spell. None of the sounds are impressive, the content is very damn standard.

The soundtrack has 70 songs in total, many of which are completely unique to this title. The music is perfect for a fantasy game, and makes heavy use of strings like violins and harps to create an elegant and enticing feeling. One track in particular uses only violins. The harmony and discord of the contrasting violins creates a clash of different pitches, which is absolutely orgasmic to listen to.

The game includes 1 lesbian scenes and 1 tentacle scene. It is marketed as having “monster sex” and “comedy”, but neither of those are true. In fact, these sex scenes are very serious and somber, because the game is 100% forced sex.

The one and only fetish of this game is humiliation and forced sex. The game begins as Princess Eris is forced to watch her own mother get fucked. You watch as a soldier overpowers and creampies the queen’s royal pussy!

The problem is, this game features a ton of girls. Each girl only gets one or two sex scenes, and it’s always a forced sex scene where they lose their virginity. The first few times are hot, but after you reach the 20th similar scene, you’re missing something new.