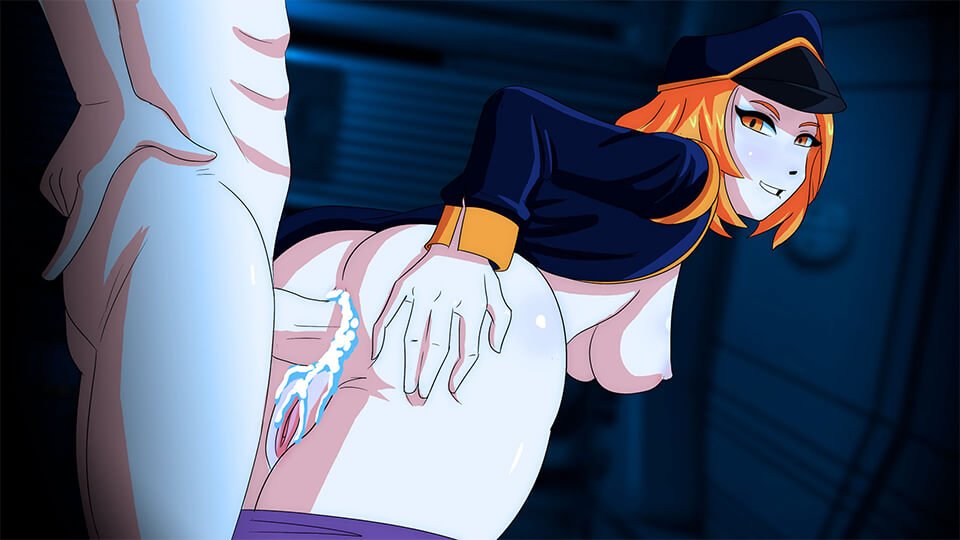 Space Love Delta, a visual novel game developed and published by Kavorka Play. Released November 7, 2019. Download at Nutaku.net for $4.99. For PC Windows. No voice acting. Uncensored genitals. Sign up free with your email

You are a rookie space adventurer. You share a space vessel full of beautiful women, and the brave noble Major Tom. One day during your space travels, Major Tom’s pod is attacked and he is kidnapped. Now you and your lovely crew must investigate what happened!

Major Tom has disappeared! It’s up to you and four beautiful crew members to rescue him. You follow clues to find the distress signal from Tom’s pod. You and the crew come across a strange rock structure with glowing lights that open into a strange vessel with death traps. Together with captain Yuri, officer Blade, doctor Himeko and Akane, you must solve puzzles and discover Tom’s fate.

The plot sets up a good mystery surrounding the disappearance of Major Tom, but never develops the idea or the characters. The script is more focused on setting up and explaining the next puzzle. The game also forces a romance between you and your crew. Their sudden infatuation with you makes no sense. The romances feel like a sorry excuse to make characters fuck each other.

Space Love Delta contains a lot of repetitive dialogue. The characters regurgitate the same information over and over again. The game is short with generic dialogue and few jokes. The story tries to explore themes of taking on responsibility and learning self-confidence.

The game’s biggest weakness is the lack of focus on interpersonal dialogue, especially during sex. The game runs without hiccups or glitches. There are no grammatical errors that I could find.

Space Love Delta has no voice acting. Certain sentences have stock gasps and other audible abstract noises that feel disruptive.

Sound effects are limited. Sci-fi noises are copy-pasted from some generic sound library on the internet. You hear shuttle craft engines, futuristic doors opening and closing, alarms going off, and lots of monster noises. The sounds fail to leave a lasting impression.

Music in Space Love Delta is limited with only seven tracks. The game uses both original and synthetic instruments. The songs are short and loop continuously. This becomes frustrating during long dialogue and puzzle sequences.

Most songs use synthetic instruments that fit the futuristic setting. The main track is overused and distracting the longer you listen to it. The song featured during the puzzles sounds weird but fitting. It has a rave beat that brilliantly builds the scene’s tension with keystrokes becoming more dramatic over time. The theme is catchy. Sadly, the sex music is bland and uninteresting.

Space Love Delta is a visual novel with point and click functionality. Clicking the textbox advances the story. Functionality features are normal to other visual novel games with an ‘auto’ button for smooth play. The skip button helps speed through repetitive text.

There are only a handful of choices throughout the game. These choices have little to no effect on the rest of the game. There are four different endings available. Each new ending only becomes available once you have finished a mission with a different crew member. Each time you play the game, some of the puzzles change while most of the text will remain the same.

The game has 24 unique puzzles that you must solve in order to progress further. These puzzles range in difficulty; some are incredibly easy while others are hard as fuck.

The character artwork features very basic designs with bright colours and deep shadows. Edge lines are thin, and characters only have the bare minimum of detail. All of the female characters have the same face. Facial expressions are limited. Character sprites only have one pose. Characters blush frequently from embarrassment or arousal.

The sexual artwork has issues. Sex positions are tame, and made me feel like the developers were too shy to spice things up. There is no camera work, just a singular static image that doesn’t change as the scene progresses. The heroines’ genitals are often obscured from view.

You get to fuck Captain Akane in the pussy while Himeko sucks your cock. Yuri pins you to the ground. Meanwhile, the tough and serious Blade is surprisingly inexperienced at sex. H-scenes are short, the characters’ facial expressions are limited, and there are no variants of the artwork to showcase the evolution of a scene. The scenes lack sex appeal. The characters do not describe their feelings during the sexual encounter. Most of the text is simply descriptions. There is only one CG per sex scene.

Space Love Delta has some good ideas but lacks the budget to fully realize them. The focus on puzzles is a great idea, but the low production values hurt the game’s sexual appeal. You can download Space Love Delta at Nutaku.net.