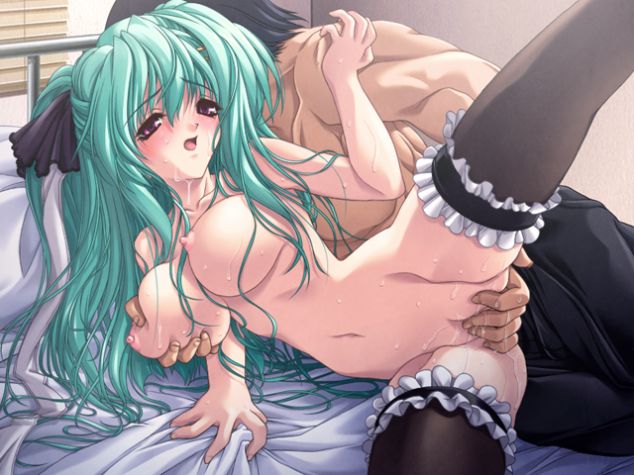 The demons are hunting down your sister! Thankfully, they’re extremely negligent, so you can enjoy tons of slice of life moments going to school like nothing is wrong. And she’s only your adoptive sister, so feel free to fuck her.

The alternate title for this game is Zaishuu -The SiN-. This review includes massive spoilers.

The writing in this game is horribly flawed for countless reasons. Prepare for a clusterfuck.

The first hour of the game introduces ten characters back to back. The protagonist is an unlikable douche who has a supernatural talent for battle but is generally apathetic and doesn’t drive the plot forward. He has an adoptive sister who adores him, but he’s so apathetic he resents her for it.

There’s a metal man in a duster coat, who is secretly a crab demon. There’s your dog named Cassaca who can transform into a girl. There’s a mysterious blonde named Yukari who has no development or scenes. There are over seventy unique decisions, but almost all of them have no effect on the story.

The game offers three routes. Each route has two possible endings, except for Nagi the demon hunter who has four endings. Best girl Yukari does not have a route. The worst girl is Mayuki, she has a route completely disconnected from the plot. Mayuki is just some schoolgirl who has a crush on you, so you can completely ignore the demons and fuck her repeatedly if you want.

The game has countless internal monologues that slow the pacing. The game is 90% slice of life content with 10% horror. The writer often leaves things vague and unexplained to keep you curious to play more. The characters have no motivation or goal until you’re six hours in, so most players will drop this title way before they get there.

The translation makes countless small changes that add up over time. For example, the voice actor will say “Oni-chan” but the text says “Akira”. Or the characters will call their friend a nickname, but the text uses her real name. All of these changes are super obvious. They’ll either kill your immersion, or make the characters feel robotic.

Although the game offers three routes, they don’t branch off until you’re upwards of eight hours in. The vast majority of the content and the choices occur before the route branch. While other games let your choices decide the route, this game is basically a kinetic novel for eight hours.

The one fatal flaw that really kills this game is the lack of a consistent tone. Most of the game is spent making chit chat with your friends at school. When horror events happen, you always know it’ll work out fine and tomorrow you’ll be back at school.

And not to mention the weak story and shitty villains. They don’t even feel like a threat, considering they let you goof off so much. And you have to play for hours before you actually get to meet the villains.

Guilty The Sin is a visual novel. You click the screen to advance the story. Every so often, the game presents you with meaningless choices. Progress can be saved in multiple save slots.

With upwards of ten hours of content, you’d think there would be some kind of gameplay, but no. This is a hyper-linear experience.

The art clearly demonstrates the age of the game. While it’s in the Japanese anime style, the 2003 aesthetic is evident. The enormously large eyes, the bread loaf dicks, and the over-emphasis on every single strand of hair. Even at a glance, this game looks decades old.

Although this is an official English localization, there have been reports of text being compressed together or cut off. The earliest copies of the game had this problem, but it seems like MangaGamer may have patched it out recently. Still, for a visual novel to have text problems is unacceptable.

Another key issue with this game is that the standing artworks are often small and don’t fit the screen. This emphasizes the height difference between male and female characters. However, when every girl looks like a midget, it’s very hard to take the game seriously.

Guilty The Sin has full voice acting for all six female characters. Each girl has a unique voice actress and presentation style.

Yukari is your new teacher, so she has a mature and womanly voice. Meanwhile Nurumi is your sister’s friend, so she has a bit of a mischievous tone. That’s opposed to your beloved Aya, with a high-pitched girly voice you’d associate with your younger sister. Altogether I highly recommend you lower the music level, so you can enjoy the voice acting fully.

The voice acting is realistic and not burdened by expectations of being super cute or wild. In fact, everybody talks like real people. None of that “Nyah!” or “baka!” bullshit, this game genuinely felt like a visit to Japan.

Sound effects are only used during sex scenes and fight scenes. Even when people enter a room, you never hear door creaks or footsteps. The game rather emphasizes the atmospheric music and mood. This makes fight scenes even more intense. The music is interrupted with strikes and poundings that feel even more impactful because they’re contrasted with your quiet school life. Altogether, the sound design is magnificent.

The soundtrack includes around ten unique songs. There are variations that remix and add to existing tracks. For example, the sad and suspenseful music is a beautiful piano track. When the conversation shifts to a dramatic moment, bass guitar and violin are added on top of the piano to create a full and complete melody. While both tracks have the same rhythm, the addition of new instruments gives new life to a familiar track.

These songs are a mix between perfection and mediocrity. The track that plays during school is digitally synthesized elevator music, but the suspenseful track sounds like a work of Beethoven! The wide range of music means that the audio is never dull, but it’s clear that some tracks got more attention than others. One track loops every 30 seconds, while another track lasts for upwards of two minutes.

The title screen has no music, and the default settings have the music blasting incredibly loud. Neither of these points are game-breaking, but they’re a source of annoyance.

The game has around 30 sex scenes in total. Remember that this game is ten hours long, and most of the scenes are available at the end of the game. You’ll have to play for hours before ever seeing a titty.

The first sex scene in the game is when a female villain forces you to have sex with someone. For some players, this is a deal-breaker. This mandatory scene takes control away from the player and forces you to watch something you never signed up for.

The netorare content was incredibly disappointing. Only available in one route, Nagi the demon hunter gets groped and fingered by some random guy for no reason. One moment she’s a badass fighter, the next she’s a helpless girl needing to be saved. And he doesn’t even fuck her!

Recommended for fans of old as fuck visual novels. Download Guilty the Sin.