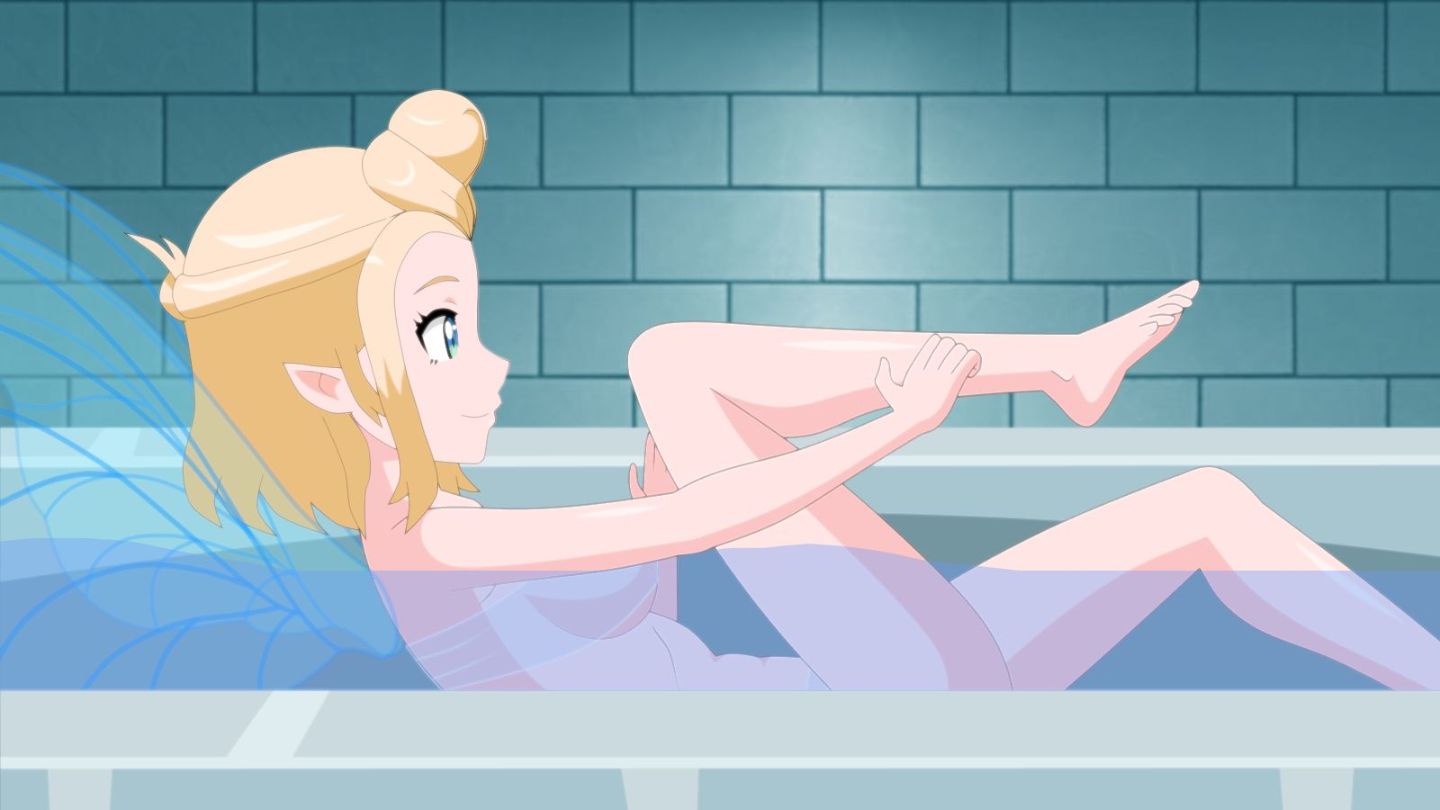 A magical fairy has arrived at your door! She plans to live with you for a week and watch over your garden! Spend time with her, earn her trust, and fill her tight and tiny fairy pussy with your cock!

The rainbow fruit is a magic multi-colored berry that is used to create powerful wands and scrolls. Eating one gives great power to fairies, and can fill them up for weeks! Such a precious item is growing in your yard, making a local fairy want to live with you!

Every day, goblin hordes will attack your home to try and steal the rainbow fruit. After every battle, you talk with the fairy to learn more lore and personal information about her.

She’s a clueless sexy girl who knows about magic, but needs you to teach her about modern technology and culture. From faucets to cookies, she’s astonished at your knowledge. It’s an old trope that makes the player feel special, and gets predictable over time.

As a kinetic novel, you’re never given choices that can effect the story in any way. The entire focus is on your fairy companion. She’s always in high spirits and kind-hearted, even in the bedroom. She does her best to please you. In fact, the reason she’s fighting so hard is because the goblins use those fruits to lure out and capture fairies! Everything she does is for the sake of helping others.

Hilzartov Fairy is a kinetic novel with a point and click arcade game. Click the arrows on screen to advance or revert dialogue. Click the boxes at the top of the screen after battles to perform intimate actions. The game automatically saves progress. Unlocking scenes in story-mode will also unlock them in the gallery. It’s a very linear experience.

After the first day, the game follows a 5-part cycle. First, you kill goblins by clicking on them. Second, you eat together with the fairy. Third, you bathe your fairy. Fourth, you talk for a bit to learn some lore. Fifth, you go to bed for cuddling or sexy time.

The game cycle repeats constantly throughout the experience with barely any variations. For example, at first you can only cuddle, but as time passes you’ll unlock new sex positions.

The goblin fighter mini-game is self-explanatory. Click goblins to kill them. Over time you’ll gain special abilities or face new goblins with more HP and varying speeds. The fairy will automatically help you in battle. If you somehow manage to lose, you’re given the option to turn on easy-mode. This maxes out your firing rate permanently, making the rest of the game incredibly easy.

The game lacks polish. The dialogue rewind function doesn’t work on transitions between parts of the gameplay cycle. If you want to reread a conversation but are already in the bedroom, you can’t. This could have been resolved with a text log or simply allowing the rewind to function normally. Both of these solutions are the default in Renpy, but for some reason, the developer didn’t include them.

Most players report being stuck in animation loops that they can’t resolve. Whether you’re in windowed mode or fullscreen, you will still be forced to press F2 to reset the game. This is a fatal flaw in the experience.

The game is fully animated. You fairy companion talks and moves during dialogue and sex scenes. There are 13 animated scenes in total. From cuddling to sex, the characters move in a fluid and believable manner.

The text box doesn’t indicate who is speaking, instead using colored text for this purpose. This was confusing at first, and can hurt player immersion. You don’t get to name yourself or see the name of the fairy, making for a very impersonal experience. At the start of the game you can click to touch the fairy and view her reaction. Regardless of where you touch her, the reaction is always the same.

The fairy companion is fully voiced. The voice acting is in English, with many lines sounding very well done and completely believable. Even with such an absurd premise, the voice actress does a fantastic job of conveying the personality of a cute and spunky fairy girl. Naturally, she can only work with what she’s given. Some of these lines are cheesy, and some lines repeat every in-game day.

Sound effects are used in a reasonable fashion. Tossing rocks at goblins has a sound effect, but bathing in a bathtub does not. This makes sense, because nobody wants to hear loud splashing noises while fapping.

There are a handful of music tracks, each is unique and very well made. Electric piano is mixed with bass guitar and drums to keep the beat. So many instruments come together to create a unique melody that feels relaxing and nostalgic. The main menu theme is fantastic. A harp and guitar create a simple rhythm that relaxes the mind.

The music changes for serious dialogue and fight scenes. Electric guitar and sharp violin create a great sense of tension and danger. Each track is high quality and fits the respective scenes perfectly.

As a magical creature, her pussy can easily handle your adult male cock. There are only five sex positions, but they can be repeated as often as you like, with many other non-penetrative scenes to be found.

As a kinetic novel, there can only be happy endings. Still, she mentioned that goblins try to lure away and capture fairies. I would have loved a bonus scene with goblin sex, but I guess that would ruin the romantic feel of the writing.

Hilzartov Fairy is an engaging game about pelting goblins with rocks to protect your fairy waifu. The game is fully animated with tons of movement and life behind every scene. The music and voice acting are glorious. There’s tension and excitement at every turn. If you have a fetish for size differences, this is the perfect game for you!