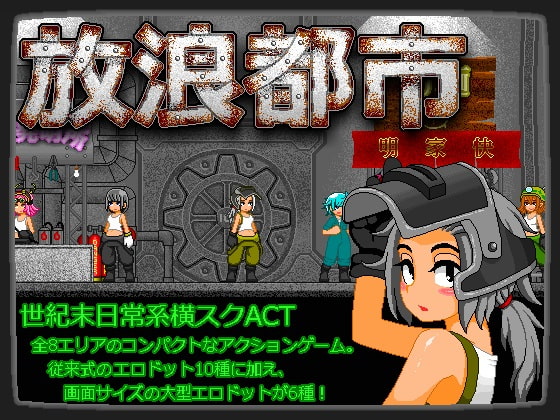 After a nuclear war between the US and China, much of humanity survived in Fallout shelters called “Vaults”. The technology from these vaults was combined with Rivet City to create a mobile civilization, scouring the wasteland for food and parts. Like the maiden voyage of the Titanic, enjoy this final expedition in the last century of humanity!

The premise of the game is downright awesome. Rivet City from Fallout 3 has been adapted into a mobile fortress where the survivors of the human race live in. It’s the perfect setting for a post-apocalyptic sex adventure!

Sadly, this game lacks an overall story. As you upgrade your equipment, mini-events appear like picking up a lost scavenger and spending time with your friends aboard Rivet City. But the game has no villain or plot or even an ending. It’s just a free roam simulation style experience.

Hatsume from My Hero Academia is the equipment mechanic. Moira Brown from Fallout 3 sells items. Takahashi from Fallout 4 sells food. While all these references are nice, they don’t culminate in anything significant beyond a cameo.

The three main characters are Vet, Maple and Kefir. Vet is the protagonist and head mechanic on the ship. Maple is her friend and a bit of a goofball slut. Kefir is a new recruit to Rivet City, a young man who’s hopelessly in love with Vet, but never confesses his feelings. Besides bits of dialogue, everyone feels a bit underdeveloped.

Acid Style is well known for fantastic world building that never goes anywhere. Still, the game is worth playing for the unique setting alone. It’s not often you get a Fallout parody that actually does something creative with the source material!

Wandering City was created using “Action Editor 4”. While it appears to be a generic side-scroller, it’s actually an in-depth action game with an emphasis on your search to find resources to repair Rivet City.

There are no level-ups or experience points, only money. Bottle caps are the currency and are earned via repairs and selling items you’ve found. These caps are used on new outfits and upgrading your equipment. Repairs require building materials. These can be bought in the commercial area or found on Junk Island. This is a randomized dungeon the player is able to visit every three in-game days. There is no game-over, or day limit. If you miss the island, just wait for it to reappear.

While the game may look complicated it’s actually super simple. Your health bar is in green and decreases when attacked or touched sexually. It’s recovered with food or rest. When defeated, you lose some caps and return to base.

Arousal is the red bar underneath your health. It raises as you get touched, and an orgasm will lower your health. If you stand still, you can see the day and time on the top left corner of the screen. Be sure to ask the scout atop Rivet City if they see anything on a daily basis. If they do, you’re close to a junk island dungeon.

The bottom right corner of the screen has your caps, tool level, and current building materials. Tool level allows you to repair more complex structures.

One of the junk island dungeons has a minigame called “Base Defense Force”. It’s all about ground troops versus air troops and super easy to play. It’s basically a NewGrounds flash game like Defend Your Castle. It’s a really quirky experience.

The game is fully animated. The pixel art is beautiful but most of the human characters look alike. The monsters however, are varied ranging from a tentacle creature to a simple monkey with extra arms.

Vet has four basic looks. Nudity, casual wear, wastelander clothing, and a swimsuit. The clothing affects sexual pixel animations but not the CG images. In effect, you can only customize her for sex with giant monsters.

The main menu graphic is simply ugly, and doesn’t accurately reflect the art style of the game. Even worse, Rivet City is super small! There’s a dormitory and a shopping plaza. That’s it! Sure there’s a roof and basement, but there’s nothing to do there except repair equipment and talk to the scout. And since NPC dialogue never changes, the world can get borderline claustrophobic over time.

While the animations in this game are nice, I wish there were more. We see plenty of animations of side characters like Kefir getting fucked with, but not enough of Vet. Even though she’s the protagonist, she only has a handful of animations compared to others. I would have much preferred that she gets all the animations instead. As it stands, you can see all of Vet’s animations in under an hour.

A great feature of this game is the freestyle gallery. There, you can place a character sprite and choose their animation. This allows you to track your progress throughout the game as you unlock more sprites by defeating enemies and exploring outside of Junk City. It’s sort of like an interactive recollection room, and I adore it.

Wandering City has no voice acting.

Although there are 28 music files, only two or three are ever used. The main menu music is as generic as it comes, and the track for the main game never changes. Whether you’re having sex or repairing the ship, the music does not follow your actions in any way whatsoever.

Wandering City features 10 CG artworks, and another 10 sexual animations. The DLSite page itself emphasizes “they’ll plunder a vulnerable person’s tits and asshole. Warning. There’s no pistils in stamens action”. In other words, do not expect vaginal sex at any point in time.

The most common sex scenes are when a monster gives Vet a rimjob or when giant things stick their appendages up her ass. Beyond that, the game is severely lacking in sexual content. It actually feels like the developer included these out of obligation rather than passion.

Wandering City is a super niche and unique Fallout parody game. The setting and game design is awesome, building on the lore of a post-apocalyptic world. Sadly, there is no overall story, so the game remains underappreciated by most fans. All it needed was a bit of something extra, and this would be a truly unforgettable experience.

Download Wandering City. If you liked this game but prefer tan blondes instead, check out our review for My Expedition.